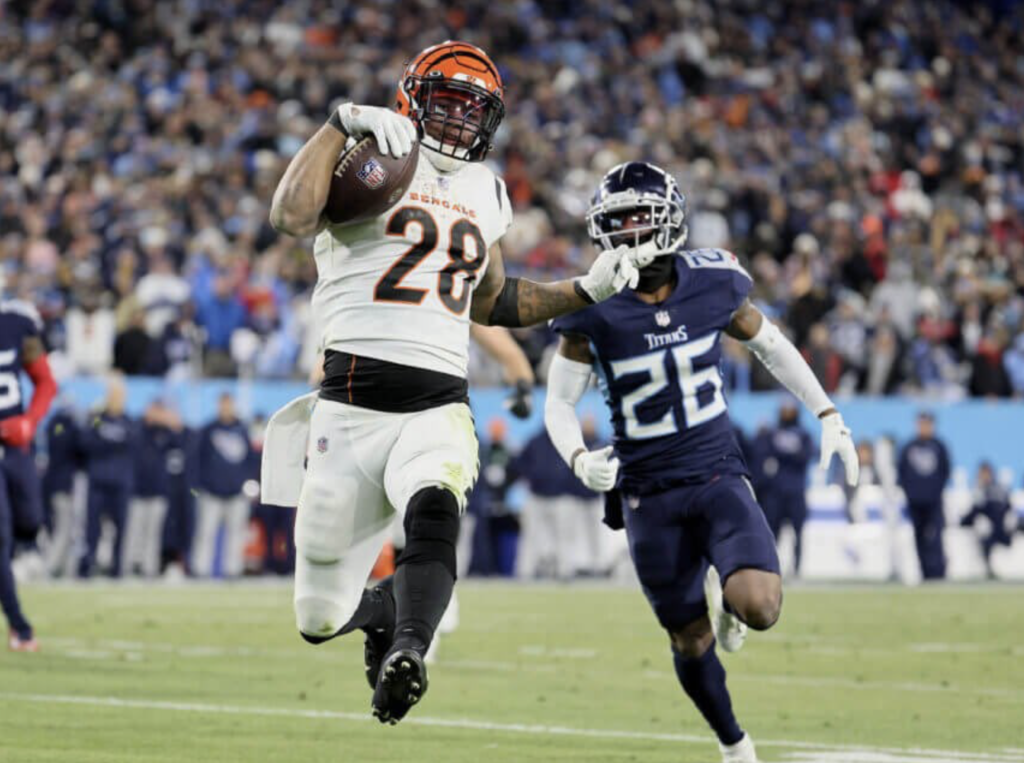 CINCINNATI — If the Bengals offense is to reach its potential, then La’el Collins and Joe Mixon will be key cogs in the machine.

Joe Mixon has had exactly two explosive runs this season in three games. He had a 31-yard burst on a backside cut against the Steelers in Week 1 and a 10-yard run in Week 2 in Dallas. His longest gain last week against the Jets was nine yards. Mixon is averaging 2.8 yards on 58 carries so far.

“I don’t see that,” Callahan told me. “You have to ask him if he felt that way. I don’t see that. I see a couple of runs that he’s almost popped on the counter. He ran really low. He got picked off and Joe ended up making linebacker miss and getting about ten yards, which I thought was a really nice run. And he’s had a couple of nice runs. I mean that short yardage run was was beautiful.

“He hit that thing hard against Pittsburgh. I think it’s just the combination of probably not being totally dialed in early in the season so far and getting better as we go. I think you’ll I think you’ll see improvement from him. He’s going to run for for a bunch of yards because he’s going to get a lot of opportunities to do it. I don’t really worry about Joe at this point, too much.”

There’s been plenty of body language reading of Mixon during the first three weeks by fans and media alike. Is Mixon frustrated?

“I do think he gets frustrated when it’s not going well,” Callahan conceded. “I think he wants to help the team. He wants to be a big part of it. He wants to be able to to run the ball for a bunch of yards and contribute to the win. And so when he’s not that, I think that’s frustrating for all players.

“He just wasn’t making the plays he’s accustomed to making. But it’s personal pride that those guys want to play well and they want to show off for themselves. So, there’s there’s moments of that when it’s not going as well as you anticipate it going or think it can go. Some guys can get frustrated and it’s not, again, anything out of the ordinary for anybody. I get frustrated when things don’t go well, too. So I understand that.”

Then there’s the Bengals starting right tackle. La’el Collins didn’t practice last week with a back issue and wound up playing all 68 offensive snaps. The Bengals are clearly managing the 29-year-old veteran the best they can. Would they like him to practice? Absolutely. But Callahan said Tuesday getting him ready for game days is the top priority.

“Yeah, it’s a great balancing act,” Callahan acknowledged. “He’s not the first guy I’ve been around that needs to be managed throughout the week as a veteran player. In the meetings he’s around, he understands what’s happening in the physical part. You try to manage for them, especially if they’re fighting through whatever, whatever issue they’re trying to fight through. We used to rest guys all the time (when) they were kind of over 30. It was sort of a common practice to take a Wednesday off, take a Thursday off, whatever that day would be.

“If you can manage it and play at a level that’s acceptable as a starter, then you can find a way to make that happen. It’s not always ideal. You know, guys are really banged up. You try to you try to give yourself the best chance to win. And if at any point that comes down to not being able to win a football game, they can’t help you win. Then that’s when you make a decision to go with someone who’s healthy and can help you win. That’s probably the best way I can put it. But he does offer things that that nobody on our roster can offer us at this point as far as his size and physicality. So that’s probably the ultimate determining factor on an on a guy when they’re trying to fight through something.”

“You obviously would prefer them to practice all the time,” Callahan continued. “That would be the ideal scenario. But at the end of the day, Sundays is what matter. And however you can get a guy to Sunday, you try to get him there. And if it requires practicing twice, walking through whatever that may be. If you’re really that much better with the player, you can find a way to get in the plan so he can perform and help you win. And that’s kind of where we’re at right now. We’re trying to get keep him healthy as fresh as we can for as long as it takes. And hopefully you start to get healthier and you start to practice more as you start to feel better. But it’s not really abnormal in that regard for trying to get guys to the game, your core starters that you’re counting on to play well for you.”

Tee Higgins is starting to look like that receiver that could bust out and take advantage of one-on-one matchups (or mismatches). Even in a game like Sunday with a talent like Sauce Gardner on him, Higgins was a beast, catching a 45-yard pass down the right sideline.

“Any time, any time you make a big play and then you get and you take a nice hit and pop up there, there is something about that energy that that everybody feeds off of,” Callahan said. “They get they get a chance to get excited about something. It’s a little bit of a toughness thing and you get to see those guys. He’s enormous. And so he’s a big, big human that that’s running up and down the field and jumping. And those guys hit him hard and it doesn’t affect him as much sometimes because he’s so big and strong. But there’s there’s a there’s an energy to that. There’s a turning of the right word for it.

“But it certainly lifts it certainly lifts people. When I see stuff like that, same thing, when Joe mixes right in there and blows a shoulder on somebody, you see the sideline kind of erupts and they’re jumping up and down. And it’s that’s part of what makes our team fun is we got a bunch of really tough dudes that they go out there and play really hard for each other, and he’s certainly no exception to that.”

The term “scary good” gets thrown around a lot but with the weapons like Ja’Marr Chase and Tyler Boyd, Higgins is putting himself in position to put up huge numbers. And Callahan is ready to take advantage in his play designs and Zac Taylor’s play calling.

“His his attention to detail has been really impressive,” Callahan said. “And he was really kind of he was into it at the (Jets) game down the sideline. He was coming over to Joe, ‘Hey, this if I get if I get one, one on one with Sauce, I’ll beat him. Just throw it.’ And that’s why he threw it to him on that go ball. And he just he felt really confident. He’s just he’s playing with a ton of confidence right now, which is awesome. But he’s just he’s really dialed into what’s happening, what’s happening out of the other side of the ball, the structure, how he can get more involved, how he can help the other receivers. It’s been really fun to watch his growth in that regard. He’s he’s been really locked in and he’s playing probably as good football as anybody right now.”

And to think the best catch he made on the day didn’t count.

The officials rules Tee Higgins did not get his feet down in bounds.

Did they get it right? 🧐 pic.twitter.com/ADv0Gc3qtv

Brian Callahan knows well enough that emotions can get intense and sometimes out of hand in the booth upstairs. But he also knows that cameras are always on him. That’s why he felt nothing but sympathy for Bills offensive coordinator Ken Dorsey, whose epic meltdown in the moments following Buffalo’s 21-19 loss to the Dolphins was captured on TV by that little camera in the booth.

“When you’re in those games, it’s emotional and it’s a back and forth. And sometimes those emotions get the best of you. I so, so much sympathize. I actually grew up in the same areas. Ken Dorsey So I’ve known about Ken for a long time. I know how it feels. And a lot of us in that situation come across as kind of calm and collected. Sometimes those moments can get the best of us because we’re all pretty highly competitive. And I empathize with him.

“I strategically placed coffee cups, put that right in front of the camera. You never have to worry about. Yeah, it’s a reminder. There’s times where you have to say that you want to react, but you know that there’s a camera there and you, you kind of pull back on it. But yeah, there’s been some (times where) probably not my proudest moments. I’m just glad there was no camera. So I get it.”