Kevin Huber hoping to hold on "I can still punt" 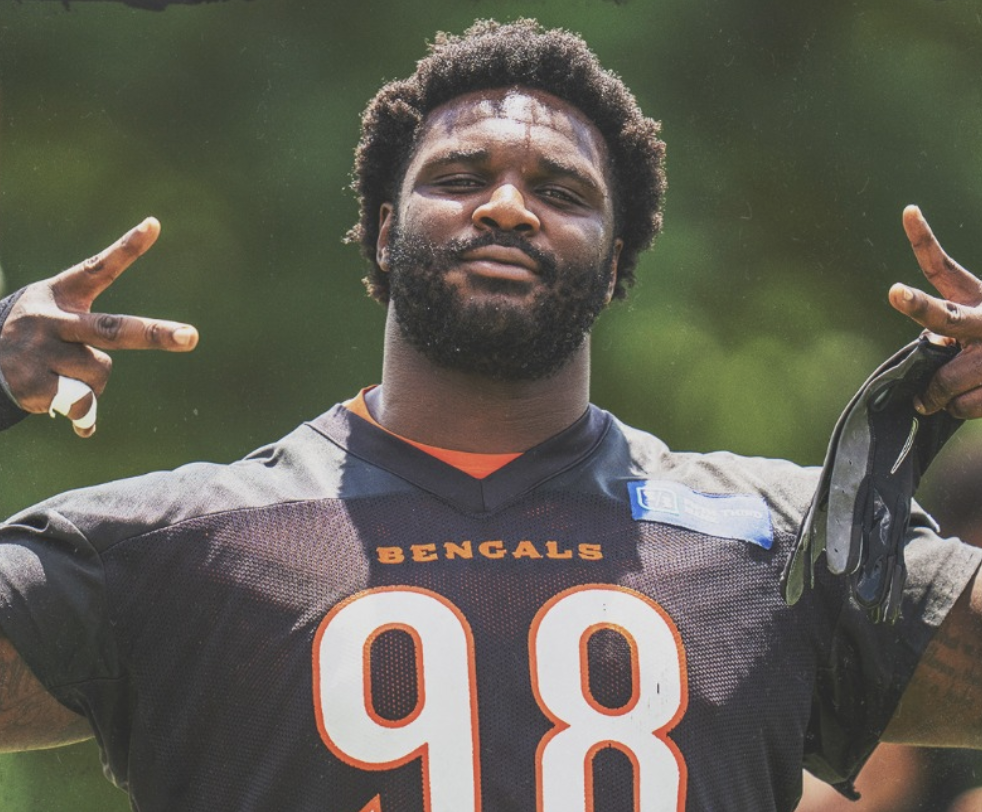 CINCINNATI — The Bengals could be getting one of their biggest pieces back this week, literally and figuratively.

If the 6-foot-3, 325-pound DJ Reader can return from his sprained left knee this week in time for Pittsburgh, the Bengals will be getting back a defensive tackle that was having a year – by the metrics and grading – that was even better than the great Aaron Donald, if you’re so inclined to believe the evaluators at Pro Football Focus, among others.

He then suffered an injury against the Jets at MetLife on Sept. 25 and hasn’t played since. The Bengals have managed to win 4-of-6 games in his absence, including the mauling at the hands of the Browns in Cleveland when the defense was worn down because the offense couldn’t do anything with three good chances in the first half.

But rehab went fast and well. He started practicing again on the Paycor Stadium turf on Monday and was in good spirits after his first practice since Sept. 23.

“I’m feeling good,” Reader said. “We’ll see how the rest of the week goes. We’ll push it and stay on top of it.”

His head coach, likewise, sounded an encouraging tone Monday about his availability this Sunday in Pittsburgh.

“Optimistic. We’ll take it day-to-day once we actually get to see him practice,” Taylor said, looking ahead to more full-scale practices Wednesday and Thursday. “I think he’s in a healthy mindset right now.”

While his mindset is important, it’s a close second to the intensity and ferocity he brings in the middle of the line, disrupting both run and passing attacks.

“I hope I bring an edge, toughness and be a good leader,” Reader said. “Just playing competitive ball for a really competitive defense.”

“He’s one of the best D-tackles in the NFL,” Taylor said. “It’s not just the pass rush, it’s the run downs as well. He does such a great job of winning and freeing up those around him on the line of scrimmage. Freeing up the backers behind him. That’s a big piece. If he’s able to play Sunday. He’s a captain so he brings all of those leadership things to the table as well. Tremendous energy. He’s a great playmaker and we’re lucky to have him on our team.”

That competitive defense has done an admirable job in his absence, with the likes of Josh Tupou, B.J. Hill and Jay Tufele picking up the slack and practice squad players Tyler Shelvin and Domenique Davis.

The two times the Bengals really appeared to miss him were on the final drive against Baltimore, as the Ravens drove for the winning field goal and at the end of the first half in Cleveland, after the Evan McPherson missed field goal that led to the Nick Chubb show inside the red zone and on the two-point conversion.

Six games in the middle of the season is something the Bengals can live with if Reader can return and dominate the middle in a manner fans and teammates have become accustomed.

“In my head this is what I thought about. But you never know how it’s going to go with injuries. You try to take it a day at a time,” Reader said. “I tend to heal fast. I work really hard at it. I’m not really a dip my toe in the water type of person. I try to push things and work really hard.”

Whether it’s running back Najee Harris or rookie quarterback Kenny Pickett, the Bengals need to have a good day disrupting the Pittsburgh offense, the way they did against the Steelers in Week 1, a game that was lost not by the defense but the five turnovers committed by Joe Burrow.

DJ Reader is back and can't wait to rejoin Sunday if everything goes well this week. He's been supporting his Bengals teammates. pic.twitter.com/pdR1FVYsRg

“It’s always important to get after the passer, being a team people are scared to sit back and throw the ball against,” Reader said. “Our secondary will be the next man up. Our guys back there are sticky in coverage, and I feel good about what they can do. It all works hand and hand. We got to make sure they’re in good passing situations and be able to rush the passer.”

Reader can’t wait to step on the grass field at Acrisure Stadium Sunday.

For the second time this season, the Bengals punting job seems up for grabs. And Kevin Huber knows it. He’s had a rough nine games to start his 14th NFL season, all with the Bengals. He has a net punting average of just over 37 yards per punt. Only New England’s Jake Bailey has a lower mark in the NFL.

“It’s no secret to anybody. I haven’t punted well in a game,” Huber said. “I haven’t been transferring over what I’ve been doing in practice and pregame to the game. So, when I talk to people, practice and pregame is like I’m a driving game scratch golfer. Then I get in the game and I’m trying to tee off No. 1 at Augusta as a 20 handicap. It’s just a little disconnect right now between practice and the game and it’s been tough. It hasn’t been a great year so far. It’s just something I’ve been trying to work with.

“I’ve had two or three-game stretches but not like this where I just can’t seem to get out of right now. I’m just trying to get it figured out, trying to put together.”

Huber, the 37-year-old punter, is simply trying to figure things out as quickly as he can to hold onto his job. And that starts with carrying over into games what he’s been able to do in practice.

“It’s really not trying to change anything (mechanically),” Huber said. “It’s trying to apply in a game what I’m doing in practice. It’s like two different punters right now. For whatever reason, I’m getting into a game and it’s sometimes survival mode and I’m not trusting what I’m doing in practice. It’s just a little bit of a disconnect right now, mentally, and carrying it over to the game.

Ultimately, Huber’s future with the Bengals lies in the hands of Darrin Simmons, the no nonsense director of special teams.

“I’ve been with him long enough that they’re very direct and very honest. We both know very well that obviously I’m not punting to the level that I need to be right now to help this team win games and get to the level we were last year. Just very direct, very honest and everything’s out there and we talk about everything.”

To have Huber and Drue Chrisman punting in practice side-by-side is nothing new, since Chrisman has been on the practice squad all season just in the event of injury or performance fall-off. But on Monday, Huber and Drue Chrisman took turns booming punts inside Paycor Stadium and it felt like training camp all over again. Huber said Monday he hasn’t been given any indication that a change could be forthcoming.

“Not yet. We’re just working through it,” Huber said. “I’m practicing and repping like I’m going to start this weekend. So, until I’m told otherwise, we’ll figure it out then. So, we’re just trying to get everything figured out.