Allan George is also in the mix for playing time as Bengals scramble. 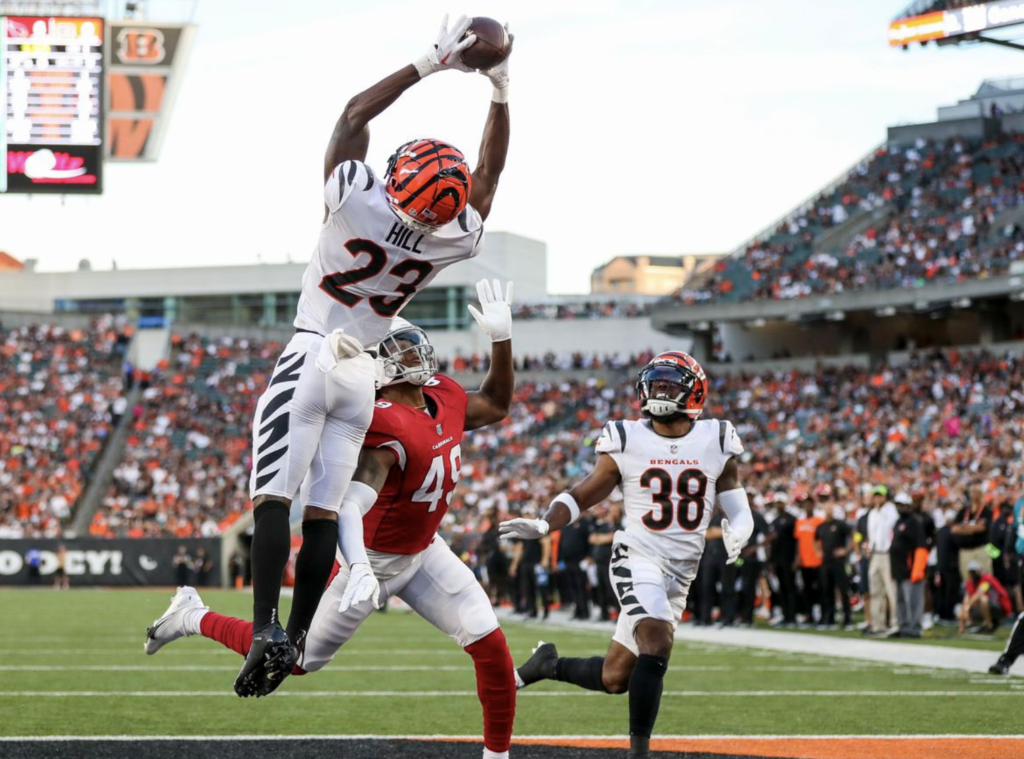 CINCINNATI — Lou Anarumo said Wednesday that he fully recovered from a bad headache. But no doubt he was feeling a different kind of pain Monday night when he watched his top corner go down with a torn ACL.

Adding to that misery was the loss of Tre Flowers, who injured his hamstring in the 32-13 debacle in Cleveland.

Now, it’s up to the Bengals defensive coordinator to figure out what to do with rookies Cam Taylor-Britt and Dax Hill and veteran Eli Apple – assuming he’s healthy – to fill the void in the secondary.

When Flowers went down Monday, it was the rookie combo of Hill and Cam Taylor-Britt that Anarumo turned to as the corners with Jessie Bates and Vonn Bell as the Browns were primarily running out the clock in the fourth quarter.

“Probably, we’ll have to get him snaps there for sure, as well as safety and other things that he does,” Anarumo said of Hill. “We’ve been doing that some, thank God, we did it last week (before Browns game) as an emergency, not enough. But we’ll have to do more of it again.”

Anarumo cautioned about reading too much into Hill’s time playing corner Monday night as the Browns were in run mode.

Don’t forget about Allan George, the rookie free agent corner out of Vanderbilt.

“He had a good preseason,” Anarumo said. “AG made some plays. He’s a conscientious guy that will be in the right spot. If his number’s called, I have confidence he’ll be able to handle it.”

The other factor to keep in mind is how much Anarumo will choose scheme and personnel to adapt.

“Yeah, it really kind of depends on what’s going on in the game for the opponent,” Anarumo said. “There’s a lot of factors into it. You try to stick to what you’re doing, because you know what you’re doing works, but if it’s a disadvantage for us, we’ll try to help as best we can.”

This is not how the Bengals wanted to see Hill get more playing time. But sometimes in the NFL, necessity is the father of experience.

“I’m ready. I’ve always been ready to step in there whenever my number is called, whenever that is or whatever that looks like this week, I’m ready for it,” said Hill. “I had never repped it at all. It’s something I have to practice this week. Literally everything is different with your technique.”

Taylor-Britt is a rookie coming off his first NFL start Monday night and missed the first six weeks and entire preseason season. Taylor-Britt gambled on knocking down a pass on Cleveland’s first drive to Donovan Peoples-Jones and lost. Peoples-Jones caught the pass and then hurdled Jessie Bates for a 37-yard gain down the right sideline.

“I had a really clean, clear coaching point after that play: Don’t ever do that again,” Anarumo quipped.

I asked Anarumo about how close he came to knocking the ball away.

“I know. I almost won the lottery too,” Anarumo said without missing a beat.

Those two answers tell you Anarumo’s no-nonsense approach to what he’s facing the rest of the season in the secondary.

Then there’s Eli Apple. If he’s healthy and recovered from a hamstring issue of his own, he’ll be back in the starting lineup this Sunday against Carolina. Apple was pulled during the win over the Falcons as the coaches decided to give Taylor-Britt his first playing time of the season.

“I’m definitely excited to be out there and representing the guys,” Apple said. “All I want to do is be that guy that everybody can count on.”

This is ironic since Anarumo made a point before the Dolphins game about never wanting to rotate his starting corners.

Allan George impressed during training camp and had nice moments in the preseason but remains on the practice squad.

Head coach Zac Taylor was not about to commit to Hill as a plug-and-play option to fill Awuzie’s shoes at that corner spot, offering instead some perspective and patience.

“It’s a long-term role for Dax,” Taylor said Wednesday. “For any rookie we were fortunate enough to have a lot of vets on that side of the ball. So we knew there was great chances early on it is very few snaps like it has been and he would have to step up on special teams and earn his way. Again, we just saw a really good player available to us at that spot (in the draft). So we took the best player available to us. Really happy with his approach, his future for us both immediate and future. He’ll continue to fill some good roles for us.”

Taylor admitted it was somewhat nerve-racking to be forced to put Hill in at corner when he’s played virtually none of it during his time with the Bengals.

“That’s incredibly difficult to get out there,” Taylor said. “I’m sure it feels very different. There are times certainly safeties get put out there. You are covering a tight end in man coverage and he gets flexed out. So it’s not foreign to them. And Dax has played some of those roles in his past. When you are covering and it is now a receiver, Amari Cooper, and you are matched up. It’s different if you haven’t practiced it. Appreciate the way he fought and went in there and did everything he could for us.”

Joe Burrow has never lost his cool on or off the field following a bad loss. That wasn’t going to change during or after Monday night’s disaster to the Browns.

“It’s not going to change how I operate,” Burrow said of his demeanor. “It’s going to be the same as I always do. It’s a tough loss but we’ve had plenty of tough losses here before. (We’re) still in the hunt, still a lot of football to played so we just have to get to work.

“I mean, we’ve done some really good things this season, and we’ve come up with some big wins and we’ve had some big losses. That’s life in the NFL. Obviously we’d love to be 8-0. That’s not where we’re at. So we got to go out, get a big win this week. And then we’ll go from there.”

Because Burrow shuts out outside expectations, he doesn’t worry about the noise, good or bad.

“It’s just about really press conferences and answering those questions,” Burrow said. “We don’t really talk about it in the locker room too much. It is what it is.

After eight weeks, what does Burrow believe is the strength of his game?

But as many on the outside have observed, the Bengals simply need to find more success in the run game.

“Yeah, that’s something that we got to get better at,” Burrow said. “In the NFL, you’ve got to be able to run the ball and I think we really had some momentum there for a couple of weeks, had some good rushes, good yards per rush. Last game wasn’t good enough. Just like I said, pass game, blocking, everything wasn’t good enough. That was part of it, and so that’s something that we need to improve on.”