Bengals Beat: How Chido Awuzie Leads With Class And Dignity In Adversity, And Why It Matters Going Forward

Awuzie says he will feed into Bengals "love of competition" in locker room. 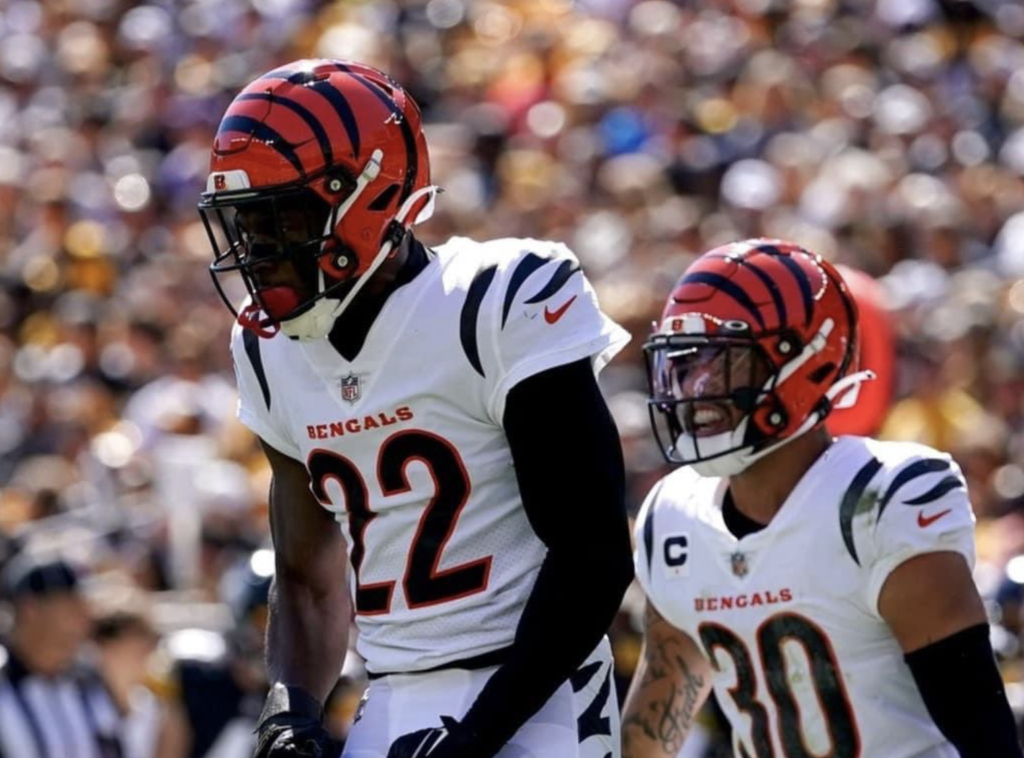 CINCINNATI — Even before he suffered a season-ending ACL tear in his right knee on Monday in Cleveland, Chido Awuzie was already considered one of the emotional leaders in a locker room filled with them.

All you needed to see as proof of that was the parade of players and coaches who, in the middle of a tense first half where things weren’t going well, stop by inside the blue medical tent and wish him well.

“I didn’t realize a lot of people were coming in there, to be honest,” Awuzie said. “I was crying. I was crying. Covering my face. I didn’t even know who was in there. I know Coach Lou came in. Mike (Hilton), Mike Thomas. Tre Flowers.

“And after people were telling they came in, I was, ‘Like man, they must have been really respectful because I didn’t know they were there. I was crying. I have a great set of teammates here. That’s the way everybody is. Good brothers to each other. Go to war with each other. We’re emotionally tied to each other.”

Every single coach and teammate that took time out Monday knew how big of a loss Awuzie would be in the secondary.

But Awuzie, speaking for the first time since his diagnosis with doctors and medical staff, committed to staying around the locker room and in meetings to help his replacements fill in the best they can and stabilize a secondary that hopes to be part of a playoff push in the second half.

Chido Awuzie admits he lost track of everyone going into the medical tent Monday. “Just great teammates here. Good brothers to each other.” #Bengals pic.twitter.com/GupUZbQhEz

That means helping rookies Dax Hill and Cam Taylor-Britt feel comfortable as more responsibility is thrust in their direction.

“It’s beautiful. We all and they all knew too that they’re gonna have the opportunity to play and we’re gonna need them like we do right now,” Awuzie said. “When I was a rookie, it was injuries that brought me into the game very early. I was supposed to be the dime cornerback and in on some 3rd downs. All of a sudden, I was playing at corner. So, I know exactly where they are. They’re blessed with great veterans on this team. I know they’re gonna do their thing.

“I already talked to Dax. He reminds me a lot of when I was a rookie because I was playing safety, corner, nickel, dime, everything. I just had to learn every position and, you know, his moment and athletic ability all that stuff is just about making everything as simple as possible. I think with Cam, it’s the same thing with his athletic ability. I came into the league as a rookie with the same thing. He’s able to pick up on concepts really quickly. I think with them two and the rest of our young guys, it’s about making the game simple, so it slows down out there and you’re responding.”

That infectious smile Awuzie possesses will be around before and after his upcoming surgery.

“(I) plan to play chess, plan to do a lot of things,” Awuzie said. “Number one obviously is staying involved with this team as much as I can. Now I’m going home a little earlier now, they don’t want me out there on the practice field and can get ran into and stuff like that. Want to expand my interests, dive into my interests while also being locked in with the guys here.”

The season-ending injury happened when Awuzie planted his right leg and turned quickly while in coverage on his good friend Amari Cooper.

“Honestly, I don’t know what happened in that moment,” Awuzie said. “I broke on the ball against Amari and when I looked back to see if he caught or dropped it, my knee did whatever it did and I hit the ground. I think a lot of people can tell I’m not used to not being able to walk, so I immediately tried to run off the field because that’s my instinct. Just get off the field.

“Just try to get back in the game. When I got back to the sideline I was thinking it might be something minor. Then they told me what they told me. Just a different experience.

Awuzie was hoping he dodged a bullet when he first got to the sideline, hopping off the field as best he could.

“When I got in the blue tent, they did the little test and I thought I did the test pretty well,” Awuzie said. “With the adrenaline going, you can’t really tell what’s what at times. Your emotions. Your energy is so high and then when they told me it’s a torn ACL and whatever else, I got really emotional.”

Now Awuzie must focus on getting mentally ready for surgery and then the rehab work that is in store after the reconstruction.

“Surgery will be in about two weeks,” he said. “When the swelling goes down. I’m learning a lot about knee injuries. I’ve never really been injured before. I’ve been hurt before, but I’ve never been injured. This is all new to me.

After getting over the pain of the injury, Awuzie is determined to support the team and lift spirits up, something he was already uniquely qualified to do before Monday’s mishap. Whether it’s in the film room, at practice, or just in the locker room offering ping pong advice, Awuzie intends on remaining present.

“I just think we are such a competitive team, honestly,” Awuzie said. “As you hear the ping pong balls, (people) know how competitive guys are. Everything in life. I have been on teams where as soon as the day is over you go home or a break like this you go take a break, go home. People are still trying to compete, compete, compete, compete. It’s a love of competition. That’s what it boils down to.

“Everyone is trying to compete with each other. We have a great group of guys that have character and have this competitive spirit. When you have guys doing it the right way it make take some time, but after time it is going to pan out to be what it is supposed to be. I’m hoping however they need me I can be a part of it and they keep the train rolling.”