Bengals Beat: How Offense Without Ja’Marr Chase (4-6 Weeks) Looks For Joe Burrow In Cleveland and Beyond

Bengals will have to lean more on Tyler Boyd, Tee Higgins in hopes of picking up slack. 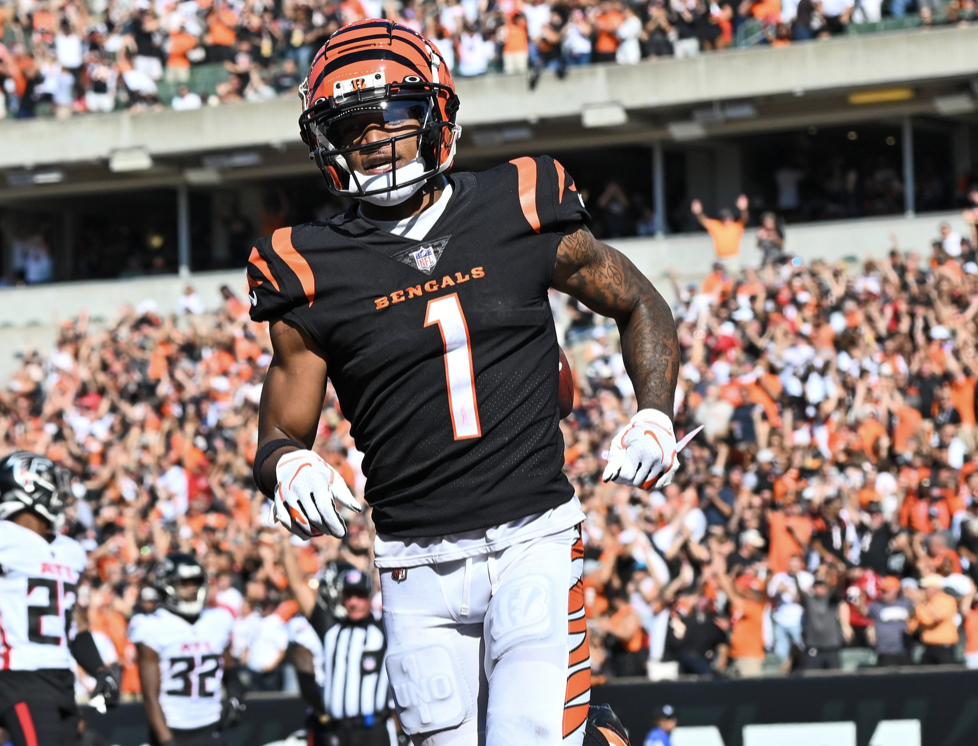 CINCINNATI — Losing your top receiver for four to six weeks is not the ideal scenario going into a huge division game with your cross-state rival.

But, according to Adam Schefter, that’s what Joe Burrow and the Bengals face now heading into Cleveland Monday night with the loss of Ja’Marr Chase due to a hip injury.

The receiver, who leads the Bengals with 47 catches, 605 yards and six touchdowns, will likely be placed on injured reserve, with the team hopeful he can return after the bye and in time for the crucial stretch run of games against the likes of Kansas City, Tampa Bay, New England, Buffalo and Baltimore.

Chase initially injured the hip in the win over the Saints and showed up on the injury report prior to the game against the Falcons.

Bengals’ WR Ja’Marr Chase is dealing with a hip injury that is expected to sideline him 4-6 weeks and makes him a prime candidate for injured reserve, per sources. Chase visited with a hip specialist Wednesday and is seeking more answers about his injury.

Chase didn’t indicate any serious injury after Sunday’s 35-17 win over Atlanta and appeared to be a good mood postgame.

Earlier in the day, Zac Taylor summed up just what Chase brings to the Bengals offense and now how they will have to compensate with him not available to Burrow.

“Speed, strength, awareness,” Taylor said. “Those are three pretty good factors right there. They have to honor the fact that he can run over the top. He’s also strong enough so he can stack guys even when they’re trying to wall him off to the sidelines.

“Then he also has the body control and understanding to be able to re-engage on some of the back shoulder throws. It’s tough. They’ve worked a lot of different looks in anticipation of that happening where he has a man and a half on top of him. It’s fun to watch.”

According to Schefter, Chase saw a specialist on Wednesday to determine the best methods to address the injury.

With Chase not available, it will be up to Tyler Boyd and Tee Higgins to pick up the slack. Higgins has 31 catches and 455 yards and two touchdowns while Boyd has come on lately, grabbing eight passes for a career-high 155 yards and a touchdown against the Falcons and six catches for 66 yards against the Saints.

The Bengals will also now lean more on tight end Hayden Hurst as well as backs Joe Mixon and Samaje Perine. Don’t forget about Chris Evans. This is the secret weapon the Bengals have been stashing and now this gives the Bengals a chance to use him in flex formations as a receiver.

Before the Chase news broke, I asked Bengals offensive coordinator Brian Callahan about keeping a weapon like Chris Evans fresh and how hard it’s been to get him reps in games. Suddenly, that may not be as difficult as before.

“Chris is doing good. It’s hard to it’s hard to manufacture touches for all those guys at this point,” Callahan told me of Evans, who has just one catch for four yards this season. “Between all three receivers, Hayden and Mixon, who’s who’s been really reliable, really consistent for us. So it’s it’s hard. He’s played some roles in some pass catching spots. He’s had some plays in the plan that have been up some and called some haven’t. But, it’s just hard to spread it all the way around. And trying to get the ball to Chris is have been has proven a little bit difficult just because of the amount of other guys that we have.”

The Bengals will also likely be more inclined to implement more short and intermediate routes as well as crossing routes to account for the loss of Chase’s downfield burst. Again, not ideal but the Bengals are far from without options to still put points on the board.

Another Bengals wide receiver, Stanley Morgan, also did not practice Thursday but was in the building.