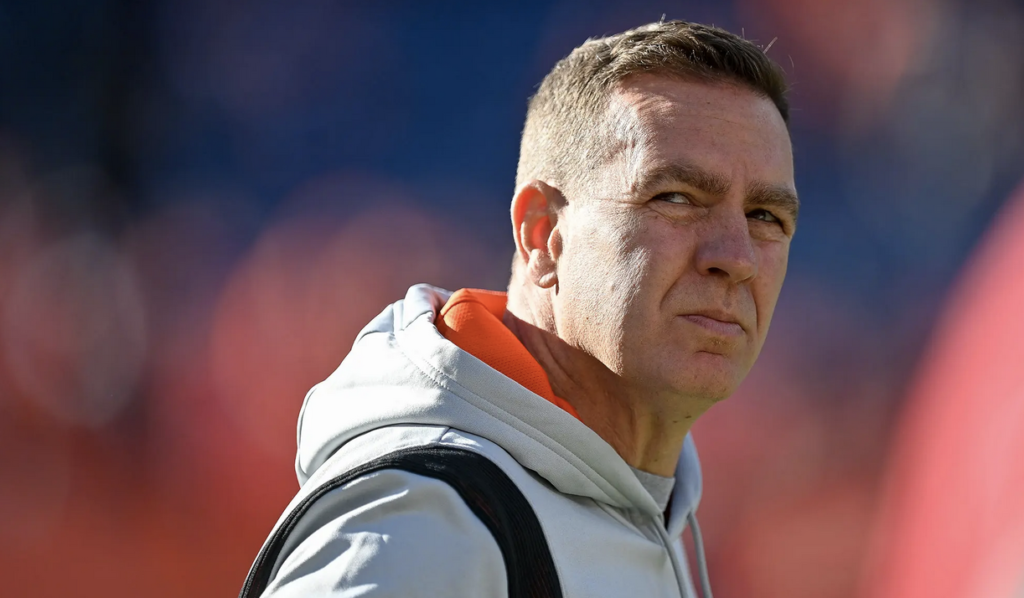 CINCINNATI — After a remarkably emotional wild card win over the Ravens, Zac Taylor gave a game ball to Lou Anarumo after his defense found a way to save the game in the fourth quarter with the “Fumble in the Jungle” started by Germaine Pratt and Logan Wilson and finished by Sam Hubbard’s 98-yard return.

Anarumo promptly took the ball in the middle of the locker room and spiked it to the ground in a manner that would make Rob Gronkowski blush.

On Sunday, the Bengals held the high-powered Bills and Josh Allen to one touchdown in a 27-10 beatdown in Orchard Park. He jogged up the runway and asked all the assembled media waiting to get into the Bengals locker room, “Why’s everyone so (f-ing) quiet?!?”

Make no mistake, Anarumo may be cold and calculating on the field and in his office when he’s scheming. But when his players put it all out on the line like they have in a 10-game winning streak, he’s raw joy and emotion.

That’s why so many in the locker room love to play for him. He’s a proud Italian defensive coordinator from Staten Island, N.Y., with the temperament of a middle linebacker.

That’s playoff football, bring on the next.

He may not get all the glory of a Joe Burrow or have the celebrations of Ja’Marr Chase or the locker room messaging of Zac Taylor but Anarumo has the respect of everyone in the National Football League.

What the Bengals defensive coordinator continues to do to opposing offenses in the day and age of video game scoring borders on the inconceivable.

No wonder Eli Apple, who Anarumo coached in his days with the New York Giants in 2018, sings his praises. Why has this defense been able to answer the bell every time there’s been a challenge to meet?

“Cause we’ve got a mad scientist named Lou Anarumo,” Apple said, while smoking a cigar after Sunday’s 27-10 shutdown of the Bills in Orchard Park.

What does Anarumo think of Apple’s assessment?

“All the guys I work with have been good in the past. There’s been some mad men that I’ve worked with in the past. I’m kidding,” Anarumo said with a smile. “I don’t know about all that. I appreciate it. It’s funny. My kids get a kick out of that one. I say the thing all the time, because it’s the truth, but our guys play collective team defense and they understand the greater vision, the greater picture of what we’re trying to do.

“You should hear them on the plane like Sam Hubbard talking about pushing the run to the cloud corner. What defensive end says that? They’re just constantly talking about what or how things should be done on the sideline, in the locker room before the game – let’s over-communicate. Germaine Pratt sending that message before the game and on the sideline. I think that goes a long way, just the little things. They understand what we’re trying to get done.”

Last week, Jessie Bates spoke of the Saturday meetings he has with Vonn Bell and other defensive backs to go over high and low red zone defense assignments. Anarumo acknowledged this is the most player-led defense he’s ever seen.

“For sure, I don’t think there is any doubt,” Anarumo said. “From player only meetings, and when I say that I say that in a good way. Usually those are bad things. We these guys we have their normal Friday meeting right after we’re done with practice they get together and watch some tape. Then the DBs do another red zone meeting on Saturday on their own. It’s somethng that they want to do so it helps us win.”

Simply THE BEST. See you in KC, Who Dey Nation ? pic.twitter.com/aAoAPwoKre

Anarumo was certainly smiling when he watched the film of his team’s coverage of Stefon Diggs and Gabe Davis. Some metrics had his defensive backs with perfect coverage on 66 percent or two-thirds of all passing plays. Not bad against a gunslinger like Josh Allen.

“I was proud of a lot of them. The pressure that the guys got up front, I just keep hearing, ‘Well, you didn’t sack him as much as this year.’ Well we affect the quarterback and that’s what’s important. We want to have a gazillion sacks, I get it,” Anarumo said.

“But every time Trey rushes, he’s around the guy. Joseph and DJ and B.J. inside, those guys up front, they couldn’t run the ball. Didn’t really attempt to because (of) how our offense was in rhythm. And when they did try, we limited it. Trying to keep No. 17 in the pocket and under control. Josh Allen’s a handful, and they were able to do that. The guys up front for sure, and I think at all three levels we played really well.”

Part of the plan was to be physical with the receivers and get them off their timing and their rhythm at the line of scrimmage. Taylor-Britt was only too happy to oblige on Diggs.

“Honestly, just play my game and be physical because the physical guy that I am, he’s a receiver that doesn’t like that stuff,” Taylor-Britt said. “I wanted to keep putting hands on him at all times. Just kind of rattle him a little bit. He gets a little frustrated here and there. I wouldn’t say get in his head but get out of his game. Just wanted to play a complete football game and play sound, play within the defense, hold my leverages whenever I was guarding him. I just played top-down. Just didn’t want to let him get any shots over the top.”

Big night for our rookie, @CamTaylorBritt_ ?

Taylor-Britt sounded like he was speaking for the entire secondary when he said, “Be physical. They don’t like that. Receivers are soft.”

They’ll need that effort, attitude and execution again this Sunday in the AFC Championship against Patrick Mahomes and the Chiefs. Even on one leg, Mahomes can be deadly if you let him sit in the pocket. Could Mike Hilton on the blitz be key on Sunday?

“Mike’s Mike. We’re laughing at each other,” Anarumo said. “He comes off on the sideline, Diggs kind of got behind him on that one, and I was like, I said something and he’s just, ‘You’re funny.’ We just had a moment there. He just has a real knack of disguising his blitzes. Everybody in the stadium knows he’s going to blitz. And he just finds a way to get there. He’s a great tackler, he’s a great competitor, and happy he’s ours for sure.

“He’s just a good ole football player, so he understands when to maybe show when he’s coming and when to maybe play a little bit off when he is blitzing, or disguise one thing and show another, all based on what we’re doing. It’s not just something he’s out there playing around with, he knows within the scheme on, I’ll tell him, ‘Hey Mike, blitz from the head of the slot and he’ll play off of that.’ He just has a feel for the whole defense and how we want to use him.”

But the thing with the Bengals defensive backs, especially Hilton, Taylor-Britt, Apple and Dax Hill, they’re fearless. They’re fearless because they know they have so much support around them. When the defensive unit is as connected as the Bengals group is, you don’t have to worry about doing too much.

“It’s huge. It’s very tempting sometimes to maybe go inside and get a sack,” Anarumo told me Monday. “But then you’d open up a rush lane and whatever. It’s a rare group that way, where they know what they’ve got to do. If they make an error, they fix it before they ever get over to the sideline.”

Yes, the Bengals and Anarumo have beaten the Chiefs and Patrick Mahomes three straight times. But what Anarumo knows full well is that every game against world-class athletes like Patrick Mahomes, Travis Kelce and Jerick McKinnon requires a different game plan. And with Andy Reid, you’re never going to get the same offensive approach. Past performance does not guarantee future success.

Anarumo has been close to the vest when offering compliments on Taylor-Britt’s development in his rookie season. But the defensive coordinator has readily acknowledged that his work ethic and improvement have been solid. Taylor-Britt, on the other hand, has expressed his gratitude for Anarumo and the coaching staff the entire season, including when he first met Anarumo last spring.

“It was good the first time I met him,” Taylor-Britt said. “It was my top-30 visit. That’s when I got a chance to visit and meet all the coaches. We had a great conversation. It was genuine more than anything. We talked about ball but he really wanted to get to know me. And ever since then, the relationship has been getting closer and closer as I’ve been getting reps and everything like that. He just took it really slow with me in the beginning, understanding that I am a rookie and I didn’t play any preseason or anything. I can say he didn’t care about (not playing) just because I’m the player I am. He pushes me to the limit and I love that from him.”