Bengals Beat: Ja’Marr Chase Has No Off Switch, Tee Higgins Back at Practice 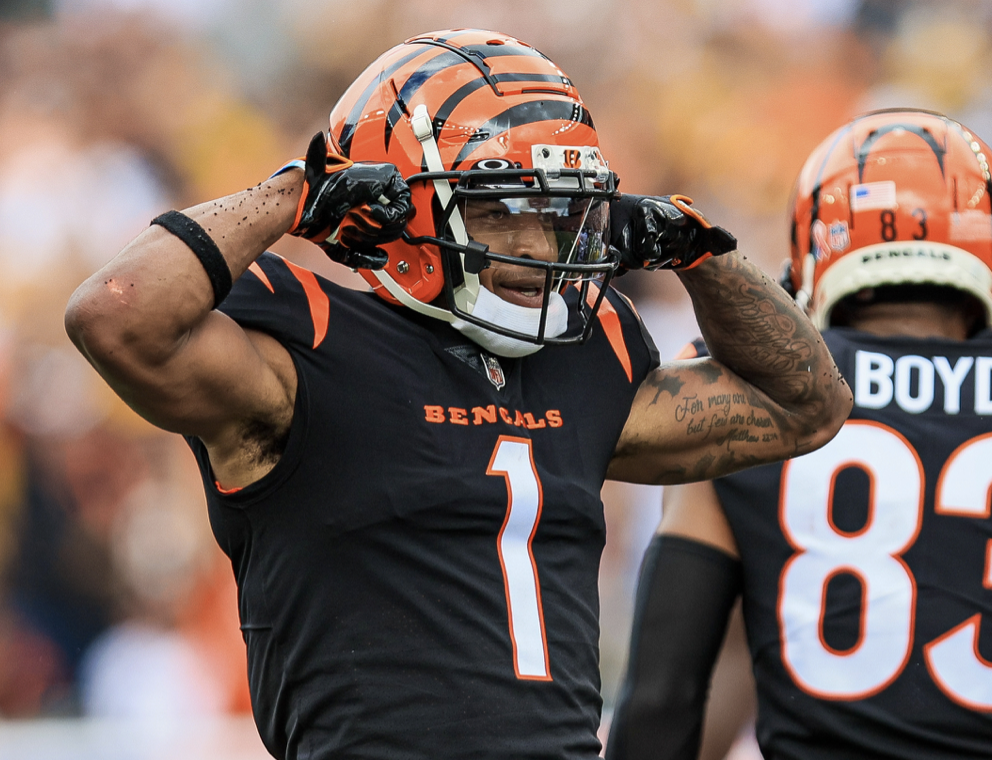 CINCINNATI — What Ja’Marr Chase accomplished on Sunday borders on the superhuman.

The way he accomplished it has left the Bengals coaching staff nearly speechless.

The spectacular second-year receiver out of LSU played in all 94 plays and 100 snaps (including penalties) on a day where the humidity (83 percent) was at times oppressive and the game was played to its ultimate maximum length of 70 minutes over three hours, 42 minutes.

Throw on top of it all, he was playing nearly every possible receiver position in the Cincinnati offense as the Bengals lost Tee Higgins to a concussion and were carefully managing Trent Taylor and his hamstring. He scored the biggest touchdown of the game with two seconds left in regulation on a play that wasn’t even in the game plan against the Steelers.

His stat line – 10 catches on 16 targets for 129 yards and a touchdown – doesn’t come remotely close to reflecting the physical and mental accomplishment.

“I don’t think he’s going to get nearly enough credit for what he did in that game,” Brian Callahan said. “It was a monumental task for him to take on. Moving to all the spots. He moved all over the place. He was running routes he hadn’t practiced, which we try not to do to guys. We try to at least give them a chance to have reps on things. But he was playing in the slot, he was playing No. 3, No. 2, he’s playing out wide, running all kinds of different routes on 95 or whatever plays, really never came off the field.

“That kind of effort, I don’t think there’s a precedent for that. The last time somebody played 94 play-game was 20 years ago. I can’t say enough positive things and how impressive that feat was. He’ll not get the recognition he deserves for that. But my God, it was impressive.”

"I don't think he's going to get nearly enough credit for what he did in that game…My God it was impressive." Bengals OC Brian Callahan on Ja'Marr Chase playing all 94 plays and 100 snaps including penalties #RuleTheJungle pic.twitter.com/I42oXTW6Qm

Does Callahan ever not feel confident calling a route for Chase?

“Very rarely. It happens,” Callahan added. “It does happen. But the mental challenge he overcame in that spot, and the physical challenge of it, it’s a pretty remarkable effort on his part.”

Then there was his head coach Zac Taylor. I asked the Bengals head coach about the football intelligence required to pull off the feat Chase accomplished Sunday.

“I can’t even tell how impressive it is for a guy to go (100) snaps,” Taylor told me. “The humidity that we dealt with as the rain came and went. I probably lost 10 pounds out there, I can’t imagine what he did. The consistency, we can count on him the last play of the game with the touchdown at the end of regulation and all the way through overtime. We moved him like crazy because we were losing guys left and right.

“So we just kept moving him around, things that he doesn’t necessarily practice, but he’s in the meetings, he knows the concepts. That shows you just his overall understanding of what we’re trying to do to be able to move him around in the huddle and for him to quickly understand what we’re trying to achieve and the detail that it needs to be done with is really impressive. You just walk away, not what we weren’t already impressed with him, but you see even more stuff for him to be able to do that, play 95 plays, play all the different positions and continue to make every play that came his way was real impressive.”

Asked ZT about Ja'Marr Chase and his incredible football IQ while playing all 100 snaps Sunday for Bengals pic.twitter.com/EEOggHZnRn

To say Chase’s conditioning is elite would be an understatement.

“Elite, yeah there’s no doubt about that,” Taylor said. “You don’t want to take if for granted. You don’t want to ask him to do that every week. Typically we would not want a guy to play 95 snaps, but just losing Tee and then Trent had a hamstring coming into the game so we were trying to limit his usage. Some other guys were in and out with short-term stuff. He had to play every snap. He wasn’t a guy who was trying to get out. He’s that impressive and someone in really great shape and that’s a credit to him.”

After sustaining a concussion Sunday in the first half, there was good news regarding the Bengals receiver on Wednesday, as he returned limited to the practice field and on his way out of concussion protocol.

“He’s making good progress through the protocol” Taylor said. “I can’t 100% predict that (Wednesday). He cleared the hurdles so far he needs to clear. He’ll do some limited stuff, he won’t do the team action, but he’ll do routes on air and group install stuff.”

The Bengals just got finished with TJ Watt and Alex Highsmith, now the focus shifts to the reigning defensive rookie of the year in Micah Parsons. He is fully capable of “wrecking” an offensive game plan and reminds Zac Taylor of Von Miller.

“He’s really strong at every position he lines up at,” Taylor said. “Whether it’s stack linebacker, right D end, left D end, over the center, plugging him as a backer. They’ve got different personnel groupings focused around him. He’s really dynamic. He’s similar to a lot of really good ones we’ve been around. Von Miller is the closest skill set I remember. He effects every play he’s a part of. He can get after the quarterback. All of our guys got to be ready to protect against him because he’ll go against all five players at some point up front. He can really run down some runs, he’s good in coverage, they got him in man coverage, he’s a really versatile player. He’s only in his second year but it’s impressive. It’s obvious why he was the defensive rookie of the year. He’s that good.”

The standards are quite high for the Bengals offense when your quarterback is Joe Burrow, even in practice.

“In practice you’d like never to have the ball hit the ground,” Burrow said. “That’s ideal. During the season. Camp’s a little different. You’re trying to do things and all that, but during the season you never want the ball to hit the ground. There’s definitely a different feeling than if you have a bad practice. Early in the week it’s more mentally taxing and then later in the week you start to sharpen up and understand how people are going to run this new route we have in and you get more reps at it.”

“We never want the ball to hit the ground certainly,” Taylor said. “It’s different for us. Wednesday should be a stressful above-the-neck day for everybody involved, so Wednesday there can be an error or two because they just heard it this morning and they’ll go out there and try to execute in practice. Thursday you want things to be a little sharper. There’s also a third-down element that comes there, where there’s a couple new third down calls that you’ve got to work through. The base down stuff should be really sharp on Thursday.

“And then Friday, you tie everything together, you work on your red zone. Generally you try to keep your core group of concepts in the red zone and you add a couple new wrinkles for the defense you’re gonna face because usually you feel pretty good about the stuff that we ask him to do. To define it for your, we want completions, we want the ball on time, but there’s also an element where some things are new for the first time and it should be stressful for the quarterback, and that’s OK.”

Since Chase caught the apparent touchdown with 2:48 left Sunday that was marked out at the one-inch line, there has been much discussion about the communication between Taylor, Callahan and the quarterback. Could it be better. Should Burrow have called a timeout if he didn’t like the defensive look?

“He can do that if he wants to,” Callahan told me. “We try not to burn timeouts. We try to keep them for when we need them, but if there’s a situation where he feels like it’s going to put us in a massive disadvantage or really take us out of field position that we don’t want to leave for any reason, he can take timeouts if needs to. Not just for any reason, but if it’s going to be really bad, I would encourage him to change the play, which he’s fully capable of doing and can do whenever he wants. But if he ever did that, he’s fully allowed to take a timeout if needed.

“He’s got a full play clock, so if he can wait and let the play clock come down some and now we know. Or he can look to the sideline. There are a lot of things that can happen there where he can say, ‘I’m not feeling this,’ and we can take a timeout. It doesn’t have to be rushed is my point. Yes, he’s fully allowed to do that.”

Shortly after Chase’s third catch Sunday, the Steelers safety got in the face of Chase and Chase responded with a double-dose of “You’re No. 1,” captured by an AP photographer.

“Yeah, I have and I can tell y’all have seen it, too,” Chase chuckled. “I don’t want to talk about it. We’re not going to talk about that one.”

Is Minkah a trash-talker? “Yeah, that’s what triggered it,” Chase told me.