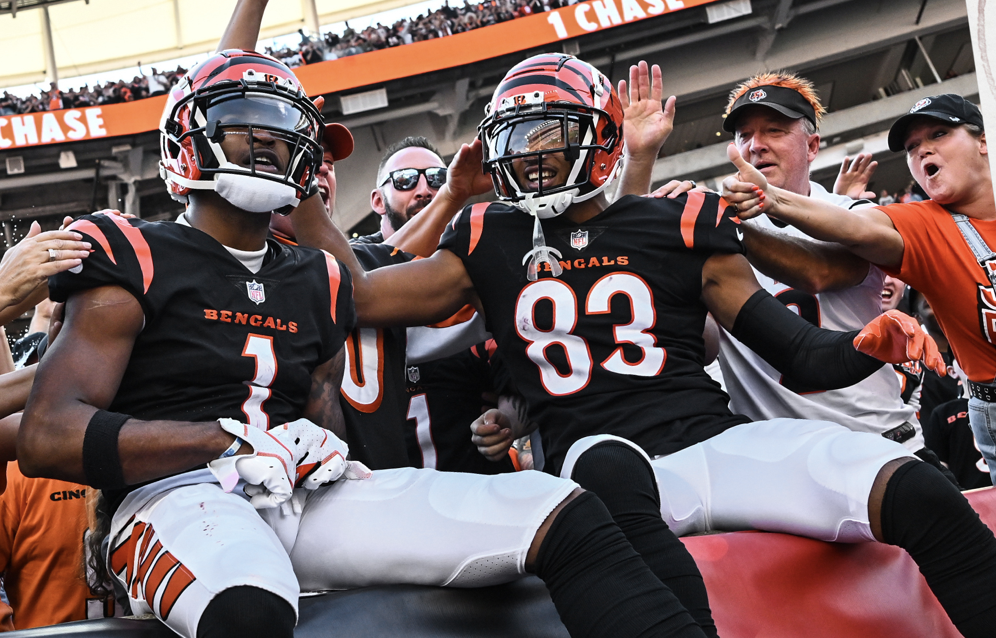 CINCINNATI — The news on Ja’Marr Chase appears to be somewhat encouraging.

While the star receiver has a hip injury that will sideline him several weeks, both head coach Zac Taylor and fellow receiver Tyler Boyd gave signs Saturday that Chase will be returning in time for the stretch run of the season.

Asked if Chase will be placed on the injured reserve, allowing the team to fill his roster spot for the time being, Taylor said the team will not put him on the list for now.

“The timing. The bye week helps, the overall prognosis of how it could play out factors into that,” Taylor said, pointing to the bye week that comes the Bengals way after games against the Browns Monday night and Carolina on Nov. 6.

As for this week, not only will Chase not be playing for the Bengals, but top corner Denzel Ward will be out for a second straight week, as he is still in concussion protocol. On top of that, the other starting corner, Greedy Williams, missed practice Thursday and Friday before returning limited Saturday. He is questionable.

The Bengals, even without Chase, could still have huge passing opportunities Monday night. And Boyd, for one, is looking forward to another game to shine.

“For me, I mean, it’s been the same as every other week, week in, week out,” said Boyd, coming off his career-high 155-yard effort against the Falcons. “We all got our certain jobs we’ve got to do and I’m gonna continue to come to, come to work, sharpen up my craft and, and knowing what I gotta do.

“We’ve got a nice receiver corps. We got guys that gonna step up and continue to make plays like we’ve been doing. So, um, we’re gonna carry the load for him.”

Boyd said he’s been touch with Chase and keep up to date on his state of mind.

“We make sure he’s good and check up on him, but you know, it’s not super devastating,” Boyd told me. “He’s got a nagging injury. He’ll be back though.”

Tyler Boyd says he's been in touch with Ja'Marr Chase and says his spirits are good. "It's not super-devastating. He's got a nagging injury. He'll be back though."#Bengals pic.twitter.com/cvWOHzbGpc

And Boyd said he never felt Chase was putting himself in harm’s way last Sunday against Atlanta, even after returning in the second half when he left before halftime with a hip injury.

“Actually, I kind of never felt that it was that serious,” Boyd added. “I just knew he had some type nagging injury, which a lot of guys like myself would play through cause that shows how much he cares and how much he wants to win, how much he wants to help this team. At the end of the day, it just is what it is.”

Boyd, with 29 catches and 455 yards, is third on the Bengals in receptions behind Chase and Tee Higgins. His 455 yards is tied for second with Higgins behind the 605 yards of Chase. In 2019, when A.J. Green went down with an injury, Boyd stepped up in Taylor’s first season as head coach and was Cincinnati’s only 1000-yard receiver, grabbing a career-high 90 catches for a career-best 1,046 yards.

“I feel like me and Tee are going to continue to head our production,” Boyd said. “We’re coming in each day and every week regardless of who’s in or who’s out, because we’ve got a job we’ve got to do and at the end of the day, and we’re still gonna get our targets and we’re still going to prepare in a way to win our match ups.”

While there’s plenty of hand wringing on the outside about what the loss of Chase will do to the offense, Boyd says with Joe Burrow at the helm and Boyd, Higgins, Hayden Hurst, Joe Mixon and Chris Evans still available as weapons, there’s no reason to panic.

“At the end of the day we got, we’ve got a ton of talent on this team,” Boyd said. “We’ve got one of our most important guys banged up right now. So, we don’t overwhelm ourselves with too much on our plate, because coaches are still going to do a great job of getting the other guys lined up in positions to where we help the team win.”