Some very good, some learning growing pains for Cam Taylor-Britt. 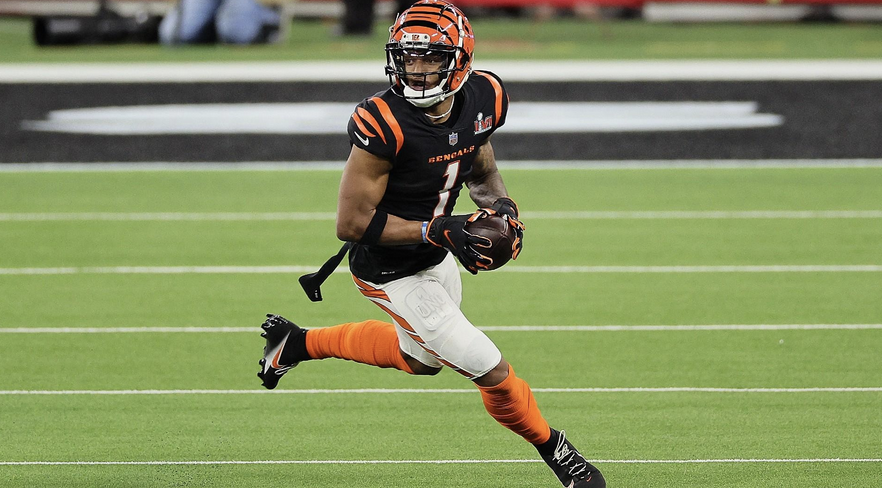 CINCINNATI — This figures to be a very important week in the prospects of another Bengals playoff run in January.

Ja’Marr Chase, who has missed the last three weeks with a reported hairline fracture in his hip, has done away with the crutches he used to keep weight off the hip. And now, the next step is for the team to get him back on the grass field this week and see how his body take to actual physical activity.

Where is the team’s confidence and level of hope with last year’s NFL Offensive Rookie of the Year?

“It’s hard to say. We’ll start working him back this week to see where he’s at,” head coach Zac Taylor said. “I don’t want to make any predictions on that. Everything has gone according to plan so far. Now it’s just a matter of getting him out there on the grass and seeing where he’s at. What’s his comfort level? What’s our comfort level? And so that will truly be a day-to-day process really starting (Monday and Tuesday), Wednesday to figure out how he factors in on Sunday.”

We won’t know much until Chase talks about the injury and how he’s feeling. Again, don’t expect that to happen this week or at least until he’s had a couple of sessions on the rehab field behind him. The Bengals know they can put up points without him.

Against the Steelers defense, they managed 37 points, including 20 in the second half in a 37-30 win over Pittsburgh. Joe Burrow relied on a heavy dose of swing passes to running back Samaje Perine and slant-flat passes to Tee Higgins and timely connections to Tyler Boyd and Trenton Irwin. The Bengals scored 35 points in one half against Carolina, which held the Ravens to just 13 points on Sunday, and three points through three quarters.

“We’re never going to rush our guys into it,” Taylor said. “We want Ja’Marr to be a big part of this as the season wears on. We’ll just take it day-to-day and just have constant communication with him and (head athletic trainer) Matt Summers and our whole medical staff and figure out what the process is. Everything has been positive up to this point as we hoped it would and now we just got to take it through this week.”

The point is the Bengals have the luxury to wait until Chase is as close to full strength as possible. Whether or not it’s a pain tolerance issue won’t be known until Chase gets out on the field and starts to test it.

“It really is hard to predict. You know we told him to stay off of it for four weeks which he did,” Taylor added. “And so now you get a chance these last couple of days to get him going a little bit. Really hard to make a prediction on it’s a balance of soreness, pain, everything feels great, impossible to make those predictions (now).

“It’s gonna be a feel thing as the week goes on, so I can’t define what it’s going to look like or feel like. He’s been off of it for four weeks. We’re going to make sure we make the right decision for us and for him, and we’ll just take it day to day.”

It should come as no surprise that the Bengals are going through the rookie growing pains process with Cam Taylor-Britt. On Sunday, he impressed with several good tackles. His best tackle was in the open field on Diontae Johnson at midfield late in the second quarter, holding the Steelers receiver to a seven-yard gain at the Bengals 41. There was no help behind and Johnson could’ve been off to the races if Taylor-Britt didn’t get him to the ground. On the day, he was in on 12 tackles.

The growing pains? Well, several times he was not where he was supposed to be in the secondary due to communication breakdowns leading to wide open spaces for Steelers receivers in the first half. This was a big reason the Steelers were able to answer both Cincinnati TD drives with touchdowns of their own and eventually take a 20-17 halftime lead.

“He’s been doing well in that regard,” Bengals defensive coordinator Lou Anarumo said. “He’s a coachable guy. He tackled really, really good on big plays, big guys in the back.”

But even then there was a coaching moment for Taylor-Britt. Don’t go high on big guys in the NFL.

“As soon as he came off, it was the same coaching point as Cleveland,” Anarumo said of his ill-fated dive to deflect a pass for Donovan Peoples-Jones. “Don’t ever do that again. Just everything’s a wrap and roll for you. You’re a corner, and that’s how we tackle the rest of the night. And it was good.”

“If you’re talking about the physically tackling portion of things, he was really good,” Taylor said. “Stuck his nose in there and did a great job playing physically. That’s what we’re going to need from him. Every rep is a learning rep for him. Again, he’s continue to improve every single week, and there’s a communication aspect that comes into play, as well. We’ve got really high standards for Cam. He’s all about it. He loves it. He provides a lot of energy out there and I thought he did a really great job tackling (Sunday).”

The pass coverage and communication is clearly where film showed Taylor-Britt needs to improve.

“Every snap for him is a new snap,” Anarumo said. “It’s a new world. You know, he made error like a lot of guys out there right now, we’re able to fix these errors while we’re winning. And he’s got to he’s got to continue to step his game up in terms of pass coverage.”

Joe Mixon didn’t return Sunday after making a pair of 7-yard plays on consecutive snaps midway through the second quarter. He caught a pass from Joe Burrow and then appeared to hit his head on the hard ground after being tackled on a 7-yard gain off right tackle. He was diagnosed with a concussion. He remained in that protocol on Monday, according to Zac Taylor.

After missing the first 10 games due to an elbow injury, offensive tackle Isaiah Prince will return to practice this week and is back on the active roster. Prince was the starting right tackle in the Super Bowl and certainly gives the Bengals more depth behind La’el Collins and Jonah Williams. Now with D’Ante Smith, Hakeem Adeniji and Isaiah Prince available, the Bengals can feel a little bit more comfortable as they enter the stretch run.