Burrow opens up about his role, concussions and talking smack with Ravens. 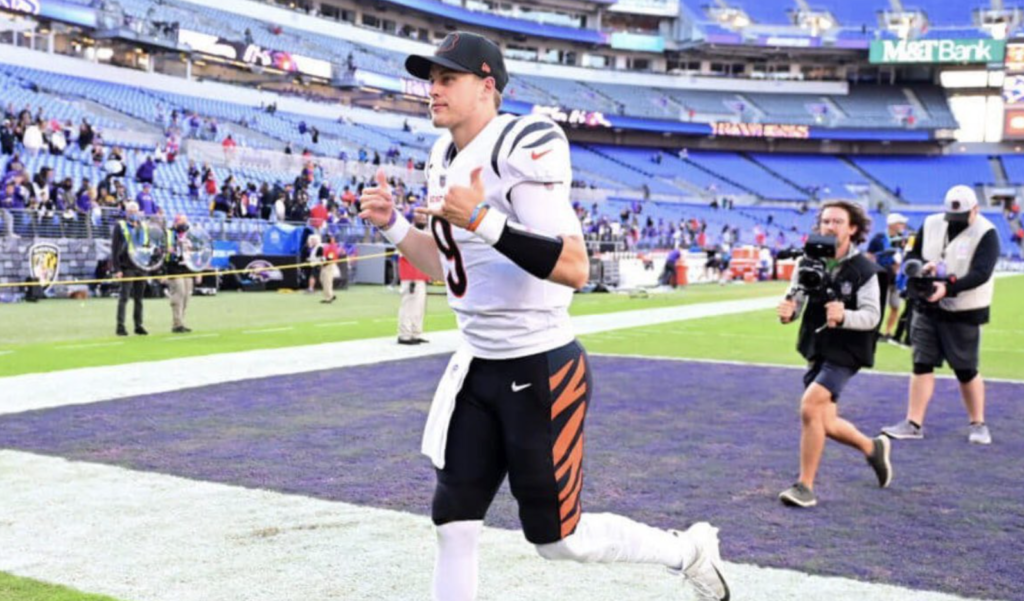 CINCINNATI — Joe Burrow has proven to be a great talent as a No. 1 overall pick from 2020 and a quarterback who led his team to the Super Bowl in his second season. As impressive as that is, he might wind up having an even greater impact in the communities he’s called home.

Burrow has married those two qualities in the creation of the Joe Burrow Foundation to serve communities with wide spread food insecurity and offer programs that will serve childhood mental health initiatives.

This week, Burrow took that commitment a step further when he pledged that his newly formed foundation would directly address those kids, not only offering food but also mental health services after so many were drastically impacted by the pandemic.

Joe Burrow explains why his foundation is so important to him and providing mental health for kids. pic.twitter.com/UByGczoTif

“During the pandemic I think mental health was a big thing that everybody was talking about it because there was a lot of socialized isolation, not a lot of social activities going on,” Burrow said. “One, that’s very hard for people that are developing, people that are in middle school, elementary school, high school.

“You hear a lot of stories of young kids who were starting to learn how to talk but they didn’t have anybody to talk to really. They didn’t have those social environments to grow that speech pattern. So who knows what are going to be the effects of that going forward. It’s something I think is a big deal in society, especially with all the social media going on and all the divisiveness in the country, mental health is gonna play a big part in everybody’s lives going forward.”

Robin Burrow instilled in Burrow the qualities that make education a cornerstone of his personality. So, it was only natural that eventually offering services that help children would be a fundamental part of the foundation’s mission.

“She spearheaded it. She spearheaded the whole thing,” Burrow told me. “I wouldn’t have done it at the time I did if I didn’t have a mom and dad that are very passionate about what we’re doing and are excited to help a lot of people in our community in Cincinnati, in Athens and Louisiana and all over the country. So she’s gonna be a big part of this thing for as long as she wants to be a part of it.”

While Burrow was thanking his mom and dad for their inspiration in the foundation, his head coach was crediting the quarterback for showing the kind of character the Bengals have come to expect from their on-field leader.

“His character matches his on-field talents,” Zac Taylor said. “That’s something I’ve seen from him firsthand in public ways that you all have seen and in private ways as well. When he’s had the opportunity to bring up topics to people who are influential, he’s done it. I think that’s what people need to understand about him. Not that people think this either, but it’s not just a public perception. It’s what he does behind the scenes as well. He’s 100 percent genuine. He cares 100 percent about people, particularly in Ohio and the region he comes from. So, I think it’s tremendous for him to take those steps to impact people in any way that he can.”

Burrow will be spending a great deal of time helping implement those services in the offseason when he has the time and energy to fully commit to the work that needs to be done.

“Coming from southeast Ohio it’s a very impoverished area and the poverty rate is almost two times the national average,” Burrow told the audience at the New York Athletic Club on Dec. 14, 2019. “There are so many people there that don’t have a lot and I’m up here for all those kids in Athens and Athens County that go home to not a lot of food on the table, hungry after school. You guys can be up here, too.”

Burrow knows full well he will be getting a king’s ransom eventually in his next deal, either this offseason or a year down the road. He’s playing a quarterback this Sunday night in Lamar Jackson that while serving as his own agent, turned down $250 million ($133 million guaranteed) from the Baltimore Ravens and bet on himself. Burrow is also fully aware of Patrick Mahomes and the $506 million extension he agreed to on July 6, 2020.

Many highly paid, high-profile athletes establish charity foundations as part of their commitment to giving back to the communities have helped make them financially wealthy for the rest of their lives. Burrow is just the latest to make such a commitment.

“I think it’s going to help a lot of people in underserved and underprivileged communities to provide some opportunities and some resources for those kinds of people help them to have a better life,” Burrow said. “We’re going to focus on mental health and food insecurity but we’re going to be pretty broad in trying to help people get what they need, food, mental health services. Hopefully provide some scholarships in the future. I think that will be good.”

While his charity foundation is still a work in progress, Joe Burrow’s reputation as an on-field general is already well established. Just ask Joe Mixon, who said on Monday there’s a certain look Burrow gets when in the huddle. He commands it.

That command should help Sunday night.

Joe Burrow texted Tua Tagovailoa after his concussion suffered on Thursday against the Bengals. It was a scary thing to watch, especially for any quarterback like Burrow, who has experienced his fair shares of head shots in his career.

“Yeah, it’s definitely happened,” Burrow recalled. “For sure. Stuff like that happens all the time. I haven’t experienced – like I’ve never had a headache the next day from a concussion, but I’ve had games in high school or college that maybe I don’t remember the rest of the game but don’t have any side effects other than that. I don’t know if you would call that a concussion or not but definitely some kind of head injury, for sure.”

Burrow took a vicious hit during the Green Bay game on Oct. 10, 2021 in Cincinnati. He was on the ground for a minute before getting to his feet and making his way off the field. He did not miss a series in that game and led the Bengals back from a 22-14 hole in the fourth quarter.

“I think it will be very individualized depending on the person,” Burrow said. “For me, if I can go back out there and play I’m going to go back out there and play. If I can do anything I can to help the team that is what I’m going to do. Obviously, if I feel like I have a concussion I’m not going to go back out there but this is a violent game that I think we signed up for the knee injuries and arm injuries and the whole thing. We get paid handsomely for it. You got to take the head injuries very seriously. Someone goes down you have to take a look at them. I have never experienced a concussion like that where I am just knocked out. If I do, I’m definitely going to take it very cautiously if I present symptoms I’m going to go tell the training staff and get myself out of there.”

"Yeah. It's definitely happened." Joe Burrow on him likely experiencing concussions in his past. Bengals pic.twitter.com/EHtS7GYuLj

Should there be more of an effort to keep players from putting themselves in danger by playing with a concussion?

“I don’t think there’s a lot you can do when a player, if he’s withholding symptoms or he wants to go back out there and not telling you, I have a headache, I’m a little dizzy,” Burrow said. “There’s not a lot you can do if he’s withholding symptoms unless you want to go down the road of taking a healthy player out when maybe he actually doesn’t have a concussion but the play looked like he did. I think it’s a tough spot. I think the league does a good job for the most part if there is a tough hit they get the guy out of there and they go evaluate him. If he is good they send him back in. If he’s not they take him out. It’s a tough job. I’m glad I don’t have that job, for sure.”

Joe Burrow loves to talk smack when he’s on the field. More than that, he loves a good challenge. He’ll get both Sunday night in Baltimore.

“We know what kind of team they are. They’re a really good team. It’s going to be a tough divisional rival game,” Burrow said. “That’s part of football – talking smack. That’s what I love about the game. I have a lot of friends on that team that I went to college with, played with. It’s all love at the end of the day, but it will definitely be intense.”

Cam Taylor-Britt hadn’t seriously thrown a football in practice as a senior quarterback since high school. That changed for the former Nebraska defensive back on Wednesday when he simulated Lamar Jackson in Bengals practice as the scout team quarterback. He was wheeling and dealing Wednesday, including a 65-yard pass downfield that went through the hands of Trenton Irwin.

“I was dropping dimes. I might go 75 today. See how I’m feeling,” Taylor-Britt said before Thursday’s practice. “I watched a lot of Lamar (in high school), most definitely I did. I improvise once the play starts but they (coaches) give me little tips ahead of the play. Other than that, it’s all me.”

“People were joking that there’s no way he could throw that long and then you see him out there and throw the ball and it was definitely 65 yards in the air,” said an impressed Bengals offensive coordinator Brian Callahan.