Mixon: "I feel like they made the best decision for everybody." 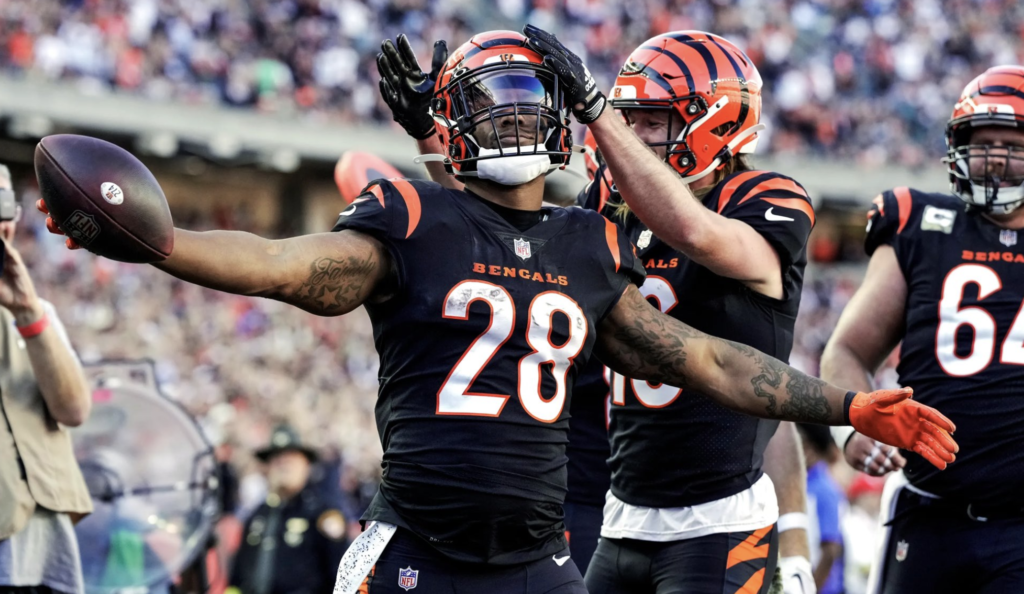 CINCINNATI — Joe Mixon is a Bengals captain for a reason.

His leadership came to the fore again Thursday when he spoke for the first time since suffering a concussion against the Steelers in Pittsburgh on Nov. 20.

The six-year back is looking forward to returning this week against Cleveland after being disappointed that Zac Taylor held off last week against Kansas City as Mixon made his way patiently through protocol.

Mixon felt like he was ready to go last week after vision issues had cleared up entirely but Taylor revealed this week that he didn’t want to go back to the doctors multiple times to see if he was better. Instead, Taylor decided to keep him on the sidelines for a second straight week while Samaje Perine carried the ball 21 times for 106 yards and caught six passes for 49 yards.

“I just feel like with the guys we got on this offense and even the guys that got to step up like Perine and receivers, everybody come in and make plays,” Mixon told me. “There’s always going to be somebody when their number is called they got to come through and deliver. We got a lot of guys in this locker room that’s able to come in and either they are a starter or come in and fill in.

“I think those guys do a great job of contributing when their number is called. I think that’s the best thing we got going here is the depth and everybody bought in to what we believe in that we are as an offense. Got to keep it in here, keep it in with each other, stay locked in with each other and don’t let outsiders tear us apart.”

There were absolutely no signs of resentment or insecurity from Mixon on Thursday. Instead, there was a willingness and eagerness to rejoin a team that appears to be hitting its stride with a four-game winning streak, heading into a rematch with the Browns this Sunday.

“Of course, it was a tough conversation because I wanted to be out there and contribute with my brothers,” Mixon said. “So, that’s always a tough conversation to have, especially when you can’t play. But at the same time, I mean, he made that decision, and I had no other choice but to live with it. So you know, it was just another week for me to get rested and get healthy and another week removed from the concussion. So I just gotta keep on going out here, doing work and going into practice working hard, things that I usually do. Ain’t nothing going to change.”

Mixon had his game to remember on Nov. 6 against Carolina, going for a record five touchdowns in the 42-21 win over the Panthers. He was showing some signs in Pittsburgh following the bye before he was tackled to the ground in the second quarter. He was later diagnosed with a concussion.

“That’s what God wanted. I’m never going to go against God’s will,” Mixon said. “At the end of the day, it gave me another week to rest, to get healthy. Perine came in and stepped in and he did everything I know he was capable of doing. He’s always been solid and he’s forever going to be that. In terms of me and the production I was having before I went down, like you said, I thought I was getting started. I felt it coming. But it’s just a little setback. But I’m going to be there. I know I’m going to be there and I know what I’m capable of doing. Everybody knows that and that ain’t gonna never change.”

Joe Mixon "had to live with" Zac Taylor's decision to sit Mixon out one more week while he worked through concussion protocol. Said his vision was biggest issue. #Bengals pic.twitter.com/czH1yrkAqv

Mixon said that while he was disappointed, he understood where Taylor was coming from.

“They made the decision. As much as I wanted to go and felt like I can contribute, I feel like they made the best decision for everybody,” Mixon added. “Perine, he did a great job of stepping up and filling in. I’m glad to see that. I’m glad he did that, man. Coming this week, just gotta get ready for the Browns. It’s a big one.

“It was more so a vision problem more than headaches. Like I said, I’m good now.”

Mixon and Perine go way back, like to the days they were both recruited out of high school to the University of Oklahoma. Ever since, they’ve been teammates and football brothers. Mixon committed to OU in Jan. 2014.

“For sure. That’s my dawg. I’ve been his teammate for eight years now,” Mixon said. “Ain’t nothing changed from the day he stepped foot in OU, both of us. We came in together. We left together and we’re at the same spot together, which is ironic. It’s a great thing to see. It’s been a great thing.

“He’s been good. I felt like with Perine, I always know what he capable of doing. You know what I’m saying? We played at OU, I’ve been his teammate for about, like, eight years now. So it’s nothing new to me, to be honest. It’s new to everybody else, but I always known he’s capable of. And then my guy, he stepped in and did what he’s supposed to do. He’d been solid every game and he definitely picked up where I left off and I’m glad to see him do his thing.”

On Wednesday, Perine detailed the close bond the two share and why Mixon is still such an integral part of the team.

Not that he needed it but Taylor did reinforce Mixon’s role on the team when he declared Wednesday that “Joe Mixon is our starting running back.”

“I don’t think that would’ve changed,” Mixon said. “I guess clarification for y’all, but at the same time I truly felt like with Perine being there, he definitely a great 1-2 back with me. He’s definitely been a complimentary back with me. He’s been that since we’ve been at OU, it’s always been that 1-2 punch. People seen what he able to do, we just going to see. We going to keep going forward and keep putting up numbers and keep doing what we do.”

Mixon returns at a time when the offense appears to be clicking, with Ja’Marr Chase back from his hip injury. They will have to do without tight end Hayden Hurst for a couple of weeks but the Bengals are entering the final five weeks in good position to put up points.

“We got five more opportunities to go out there,” Mixon said. “I’m definitely going to stay optimistic, my teammates forever are optimistic in me and what we can, you know what I’m saying? I know for a fact we just going to go out here and play each week and take it one week at a time. Each week going to get bigger and bigger, as much as people thought last week was this one just got bigger. We just got to come out here and take care of business on Sunday.”

Tee Higgins (hamstring) and Sam Hubbard (calf) appeared on Thursday’s injury report and were limited during practice indoors at the IEL Indoor Facility. Both were stretching and participating in drills during the open media portion of practice. The only player not participating was tight end Hayden Hurst.

Hurst said Thursday that he received a PRP injection for his right calf and was wearing a protective boot on his right foot as a precaution. He said he doesn’t believe the injury is a “major thing” and will likely be back in 2-3 weeks.

Hurst was asked if this was a season-ending injury. “(Expletive), no!” was his response.

Hurst also said that he had no contact with Kansas City Chiefs safety Justin Reid after the game Sunday. “That story is dead to me,” Hurst said of Reid’s confusing him with Tyler Higbee of the Rams and Tee Higgins last week.