Bengals offensive line shaping into form, and their right tackle's improvement is a big reason why. 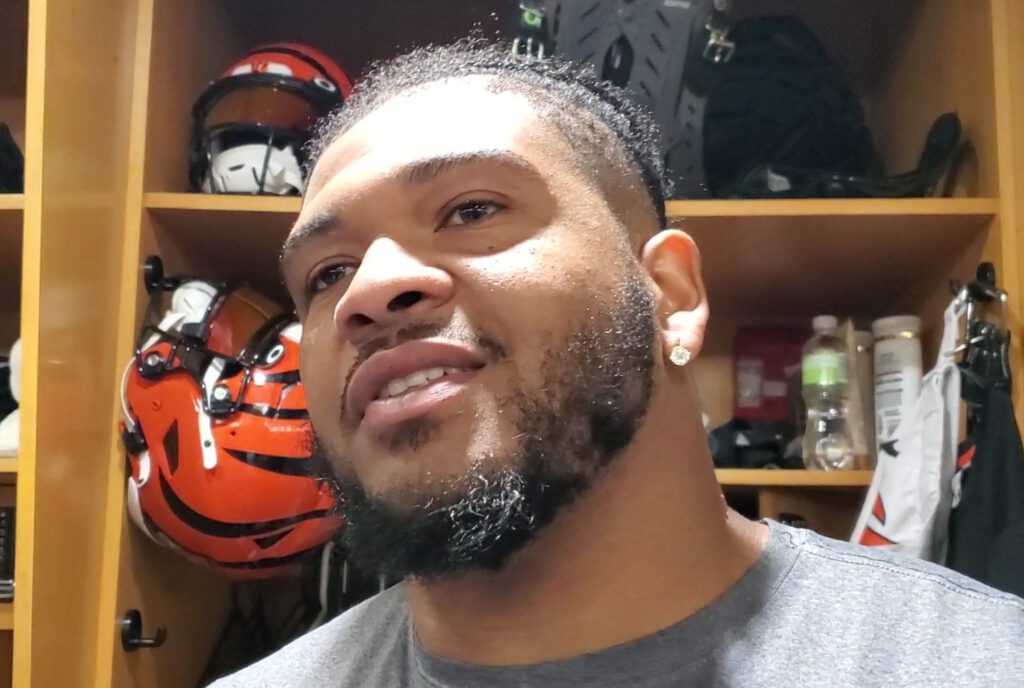 CINCINNATI — Bengals fans have been waiting for the offensive line to exert its will and dominance.

If the attitude of La’el Collins is any indication, then the Bengals might finally be on that track. That, and the play of their right tackle Sunday against one of the premiere defensive ends in football.

The Bengals gave the 29-year-old a three-year, $30 million deal on paper. But it’s more of a two-year, $20 million deal worth up to $22 million and $5 million guaranteed. The third year was added to help prorate the deal and spread out the cap charge.

Asked Thursday whether he thinks he’s finally reaching his potential at the position he was brought in to anchor, Collins left little doubt that he feels he’s heading in the right direction.

“Really, it’s just him getting his camp legs out of him and now he’s getting his season legs,” observed offensive line coach Frank Pollack. “He missed all of training camp. You can’t do that. I don’t care who you are. I don’t want to knock other sports but man, football you put pads on and you’ve got grown-ass men running into you. That takes getting your body calloused and keeping your feet and moving your feet. You can’t just go out there and say, ‘Oh, I’m good because I got it in the classroom.’ It doesn’t work that way. It’s a different sport.

“And so, I think his feet, he’s just getting more comfortable and having his feet underneath him with all the contact. And he’s just getting his hands (in position). He punched way better this last game with independent punching and when he does that, they’re devastating. He’s just got to continue to progress and keep his feet at the top of the rush, and that’s what he’s been doing every week. He’s been getting better in that regard.”

While the interior line of center Ted Karras, right guard Alex Cappa and left guard Cordell Volson has been notably improved since Week 3, the play of the tackles has improved significantly over the past two games.

The improved play of Collins and his pass protection has been evident on film. He had a nearly perfect game last week against Saints perennial All-Pro Cam Jordan, an effort so dominant that Collins felt he manhandled one of the best in the game.

“I think it was a tougher matchup for him versus me,” Collins said. “If you watch the tape (from Sunday), every time I played him, I beat his ass up. And that’s just the bottom line. And it’s going to be like that anytime I play him.”

On Thursday, it appeared Collins was enjoying a return to confidence at the position. But Collins insisted that his swagger never left.

“I never lost my confidence,” Collins told me. “When you’re playing with different things that at the end of the day, it’s your choice (to play through), and it’s your choice to go out there and step in-between those lines, nobody is going to feel sorry for what you’re dealing with. At the end of the day, when you step out there, you’ve got to be prepared. I think I’ve done a great job of making sure I’m ready to go (and) prepared.”

One of the biggest issues with Collins for the Bengals has been how to manage his back issues that have cropped up in his past, including this summer. Well, that management has resulted in Collins playing in every single offensive snap this season through six games.

The team came up with a plan, let Collins take Wednesday off and return to practice on Thursdays. This plan was put in place after Collins didn’t practice at all in the week leading up to the Jets game. He didn’t practice heading into the Miami game. It’s kept him fresh and – most importantly –
available for games against the Ravens and Saints.

“Hey man, this is for our benefit,” Collins said. “No sense in me going out there and trying to do too much and then not go out there and be able to play at the level I need to play at for us to be able to win. At the end of the day, I think we did a great job of working together on that. And I’m super grateful, obviously. I’m just going to continue to keep working and getting better.”

His head coach has seen the benefit.

“He looks to be feeling better with every week that passes since training camp,” Zac Taylor said. “He packs a punch. That’s what you see that you don’t always get to see in practice and walk throughs but you see it in games. When he puts his hands on you, people clearly feel it. I’ve never had to experience it first hand thank god. He’s just a veteran that does a really good job with his technique giving himself every advantage.”

Whether it’s comfort with his back, his teammates or the scheme, Collins is hitting stride.