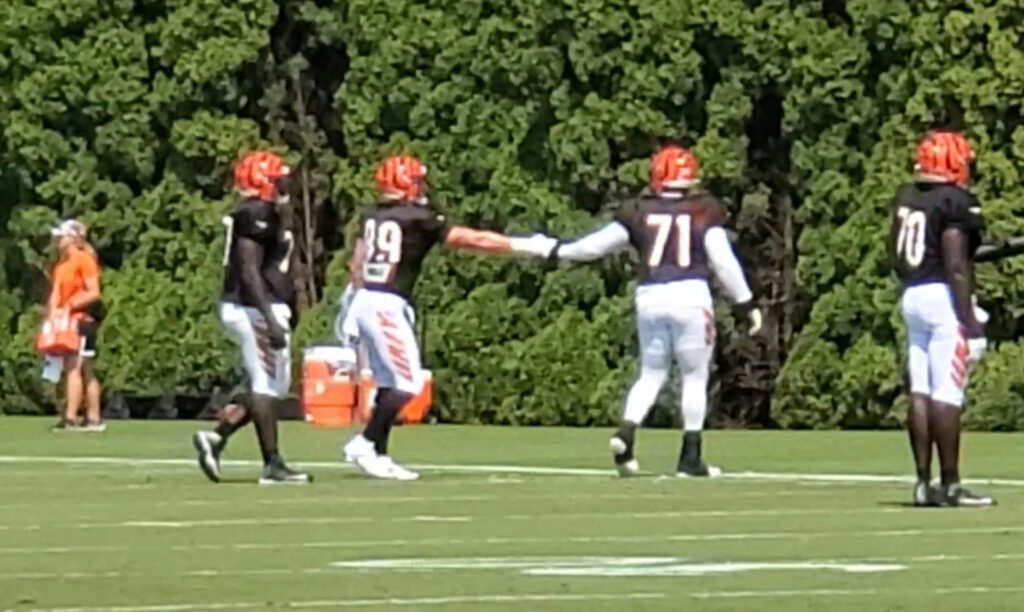 CINCINNATI — It’s nearly certain that La’el Collins had this Sunday’s game circled on his calendar since the schedule came out in May.

Two months after signing a three-year, $21 million contract to become the Bengals’ starting right tackle, he found out he’d be playing the team that let him go to free agency.

Was he surprised the Cowboys didn’t bring him back?

“Honestly I thought about a lot of different things,” Collins said. “To be back here with Frank and get coached by a great offensive line coach who also played the position, that was big for me. I got to a point of my career where I felt like I wasn’t getting the things I needed. Coming here was definitely the reason why.”

Collins did not express any resentment or bitterness toward Cowboys owner Jerry Jones, who told reporters he watched every Collins snap last week against Pittsburgh.

“That’s cool,” Collins smiled when told of Jones’ scouting this week. “I’m very grateful for Jerry, he’s a phenomenal owner. He changed my family’s life for generations. I’m forever thankful for that and the opportunity he gave me and believing in me. I was there seven years. The whole Jones family. I’m forever grateful for them.”

Collins insists the chip remains on his shoulder but it’s always been there.

“I’ve been carrying a chip on my shoulders since Day 1,” said Collins, who went undrafted out of LSU in 2015. “So for me, it’s all about going out and being me. Not tryin’ to be nobody else. Not tryin’ to be somethin’ I’m not. I’m not tryin’ to necessarily rise to an occasion or nothin’ like that. It’s just more about goin’ out and doin’ what I’m coached to do, goin’ out and playin’ as a unit, as five. That’s what it’s all about.

If there’s a silver lining to last week’s ambush by TJ Watt, Cam Heyward and Alex Highsmith, it’s that the Bengals offensive line has already seen one of the best pressure units in football.

This week, safe to say, Collins and the Bengals line don’t want Burrow sacked seven times or sacked on the first play of the game. The line did settle in and was much improved in the second half.

“We settled in. But when you look at this team and our offense, nobody blinked,” Collins said. “Our defense did a helluva job and kept us in that game and we went out there and did what we had to do to get back and give ourselves a fighting chance. The biggest thing was we just settled in and played ball.

“Every we want to start fast but sometimes it doesn’t happen that way. You’ve got to be able to stay neutral through it all. All the ups and downs can’t get you too high or too low. So yeah, I feel very confident.”

While the Cowboys don’t have the personnel of the Steelers front seven, they do have the reigning defensive rookie of the year in outside linebacker and edge rusher Micah Parsons. Parsons had two sacks of Tom Brady in Sunday’s 19-3 loss to Tampa Bay. Through his first 17 NFL games, Parsons has 15 sacks, tied with Joey Bosa, Aldon Smith and Jevon Kearse for second behind John Abraham 15.5 for most in NFL history.

“He’s a hell of a player. He’s young, he has juice and energy,” Collins told me. “The defense goes as he goes. They look to do a lot of things with him. I remember Micah coming as a rookie working on pass rush moves and telling him to do certain things. From that standpoint, he’s a talented player.”

Collins says he’s not into giving others on the offensive line tips unless, of course, they ask.

“They’re studying tape just like me,” Collins said. “We study tape together, we talk about things together, at the end of the day he’s just another opponent. We just got to go out and execute the game plan.”

Collins said it’s clear to him that Parsons has implemented the suggestions Collins gave him in Dallas last year.

“Absolutely, no doubt about it,” Collins said. “I think he’s spoken about it before. He’s definitely taken the next step.

“He’s coming into his own, you know what I mean? I think he’s really starting to get a feel for rushing off the edge. He knows what he wants to do. He’s still very raw, but super talented. One thing about it, it’s a physical game. This ain’t sitting at a table playing chess or checkers, it’s about who is going to hit who first.”

Dak Prescott is out indefinitely following surgery on Monday on his fractured right thumb. In his place is Cooper Rush, a quarterback Collins worked with in Dallas last year when Prescott went down in Week 7.

Rush was 7-for-13 for 64 yards last week in place of Prescott. In five games last season, Rush completed 30-of-47 passes for 422 yards, three touchdowns and one interception.

“He’s definitely a quality player, a great guy,” Collins said. “He’s there for a reason. He can go out there and do some special teams. Just like any opponent, you’ve got to make sure you’re ready to go.

Will Rush have the full complement of the Cowboys playbook as QB Sunday? Bengals defensive coordinator Lou Anarumo not only says will he, the Bengals are banking on it.

“Just how calm the guy was (in 2021), how accurate he was, and he made some really good throws in some clutch situations and Minnesota’s pretty darn good on defense, he was able to handle all the pressures that (Mike Zimmer) would bring.”

“You want to try to throw some wrinkles, like you would. And again, I’m treating this guy like he’s been there, he’s the starter. We’re not giving. Hey this is not a backup. But yeah, you’re definitely going to have some things in a game plan and I’m going to look like we did last week and maybe will change this week. And but at the end of the day, we are who we are, and we’ll do things that we do, just hopefully make them look a little different.

“I’ve been driving the thing home about this, guy’s a starter. This guy’s not a backup and I know he is, but we have great respect again for all He’s done so we’re not sleeping all. We didn’t sleep on the guy (Mike White) from the Jets, either. It just wasn’t our day but we’ve had two good practices so far, clean everything up (Friday in) Red Zone and get on the plane. Go down there and play our butts off.”

Collins isn’t the only former Cowboys player taking the field Sunday. Chido Awuzie signed with the Bengals for three years and $21.75 million before the 2021 season. Before that, he played his first four NFL seasons with the Dallas Cowboys, where he was teammates with La’el Collins.

“He’s a more mature guy. Obviously I’m not saying he wasn’t mature, but he’s very fine-tuned in the details of what’s he got to do. He’s a hell of a athlete. Always been that. Hell of a competitor. Always been that. But definitely a leader in this locker room.”

The start of the 2022 season was difficult for the Bengals wide receiver. He lost his father two weeks before the season began and on Sunday he was knocked out with a concussion in the first half. He returned to practice on Wednesday but was absent Thursday to attend his father’s funeral. Higgins said on Wednesday he should be good to go this week and ready to play in the Cowboys game on Sunday. His attendance Friday at walkthrough would pretty much assure that. Thoughts and prayers with Higgins and his family.