Bengals Beat: Tee Higgins Ready For More ‘Big Moments’, Believes Bengals Ready To ‘Show World Who We Are’ In Buffalo

Tee Higgins had a message for Jackson Carman, hopes to 'chop it up' with Damar Hamlin. 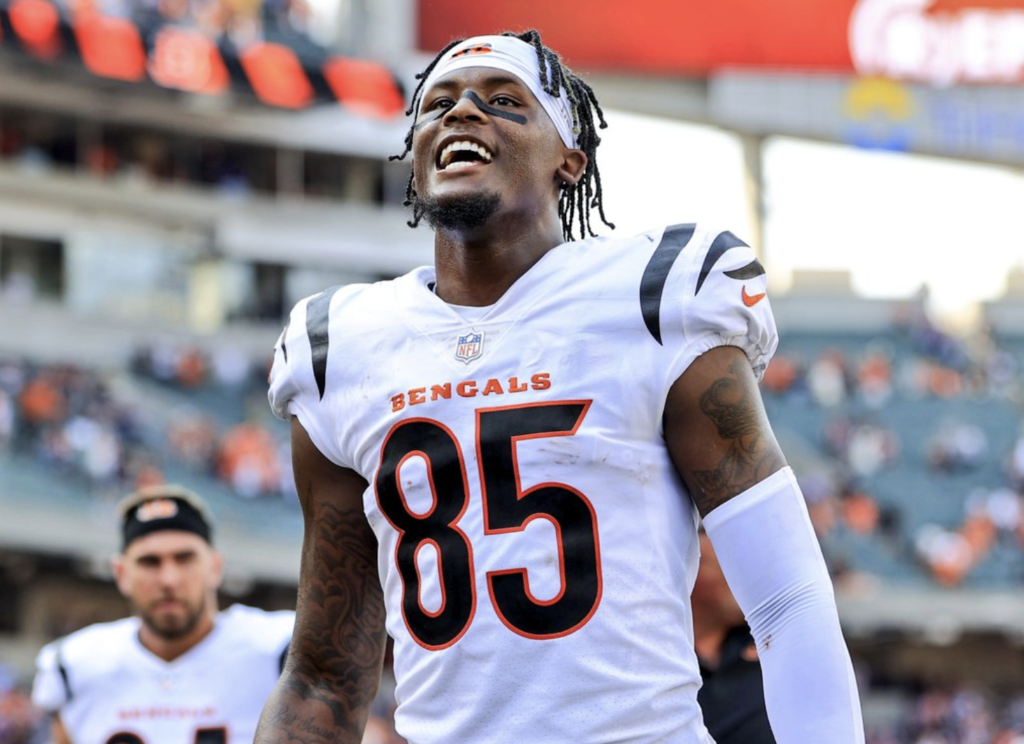 CINCINNATI — Tee Higgins was in quite the mood on Thursday.

After all, he just turned 24 the day before. He’s playing in his sixth postseason game of his career on Sunday in Buffalo and he’s on a great team that has definite Super Bowl aspirations.

What’s not to be happy about?

Maybe that’s why he threw a playful wave to the media hoard gathered in the west side lower stands of Paycor Stadium before practice. As for celebrating his big 2-4, he said work comes first.

“Nah, man. Work week. Gotta take care of business first,” said Higgins. “I didn’t watch film. I did that (Wednesday) at practice here in the facility. Other than that, I just went and ate dinner.”

Higgins and the Bengals are trying to get into that balance between all work and preparation during their time at the facility and keeping the mood light and playful, a balance this team has mastered over the last two seasons. The other balance they’ve mastered so far is a healthy confidence knowing no hurdle is too steep to clear.

Thus explains the whole “we ain’t underdogs to nobody” mentality they’ve embraced.

“But at the end of the day, it’s just another opportunity to go out there and show the world who we are. And that’s what we plan on doing.”

It’s been a trying and emotional three weeks for Higgins. On Jan. 2 at Paycor, his collision with Damar Hamlin ended with Hamlin’s collapse and the safety’s fight for his life. Hamlin is well on his way to recovery, making a pregame on-field reunion this Sunday a distinct possibility.

“I’m pretty sure we’re just going to (chop) it up, laughs and giggles and just be happy to see him,” said Higgins, who is hopeful of meeting up with him before the game.

As for that Monday night game, the game that ended on Higgins’ 13-yard crosser over the middle, Higgins said there’s not much to be gained from eight offensive snaps in nine minutes of game action.

“It was just nine minutes. There’s not much you can go and watch,” Higgins said. “It’s just another opportunity to go out there and be who we are and show the world what we can do. … You can go over some of the plays we had and game plan for them the first time. It’s pretty nice.”

What is known is that the Bengals have Joe Burrow, a quarterback Higgins says has already proven he can handle big moments, whether at home or in a hostile environment like Kansas City last year.

“He’s not going to quit,” Higgins told me. “He’s got that poise, even when we’re down. He’s going to come into the locker room and give us that ‘Let’s do it. Let’s go out there and win the game.’”

As for being 4.5-point underdogs in Orchard Park Sunday?

“I don’t really care about all that,” Higgins said. “As long as we just go out there and execute and be who we are, we’ll show the world we ain’t no underdogs.”

"As long as we go out and execute and be who we are, we'll show the world. We ain't no underdogs." Tee Higgins on what makes Joe Burrow special. pic.twitter.com/g4GqhaeP1K

Then there’s Higgins himself. He had four catches for 37 yards last week. But what Bengals fans might recall is how huge he played at the end of the Chiefs game in the AFC Championship. He had six catches on 10 targets for 103 yards, including a 44-yarder on Cincinnati’s first drive of the third quarter that led to a touchdown and cut the game to one possession.

It was Higgins’ two receptions – of nine and eight yards in overtime – that set up Evan McPherson’s game-winning field goal.

“I’m going to be honest. Some of my catches at the end. I’m just being honest, that’s what I remember the most, some of those big catches I made at the end,” Higgins said. “I’ve got another opportunity to do it this week, and hopefully I can go out there and do the same.

“I’ve been playing in big moments my whole career, dating back to college, playing in national championship games, so I’ve just got to go into this game with confidence and be who I am at the end of the day.”

How much confidence do those big moments last year in the playoffs give Higgins now heading into Buffalo?

“The utmost confidence, just going in and knowing I can’t be stopped,” Higgins said. “That’s my mindset every time going into a game.”

Pep Talk:
Higgins played on the 2018 national championship team with Jackson Carman protecting Trevor Lawrence’s blindside. Higgins said he had a message for Carman on Thursday.

“He’s been preparing well like he’s been starting all year,” Higgins said. “I talked to him (Thursday) actually like, ‘Your opportunity is here. Go out there and make the best of it and show them why you belong.’ So, I’m proud of him and excited for him to play, excited to see him play.

Turnover feast:
The Bengals continued their turnover trend last week in the Wild Card win over Baltimore. There was, of course, the most dramatic turnover in Bengals history created by Germaine Pratt, Logan Wilson and Sam Hubbard. Akeem Davis-Gaither picked off Tyler Huntley in the first quarter. The Bengals have 11 takeaways in their last four games, nearly three per game. If the Bengals can continue that Sunday in Buffalo against the turnover-prone Josh Allen, their chances for victory drastically increase.

“They come in bunches,” said Vonn Bell, who saved the game in Foxboro with a punch-out of the ball from Rhamondre Stevenson. “Guys keep on doing their job, plays gonna come. When you have an opportunity, make it. You don’t have to do anything out of the ordinary. Do your job, trust it, plays gonna come, go out there and feed off one another and be happy to play the game that you love at young age and a high level, going out and playing with your brothers and executing at a high level.”