Bengals Have Their Hands Full With Taysom Hill, Explosive Saints. 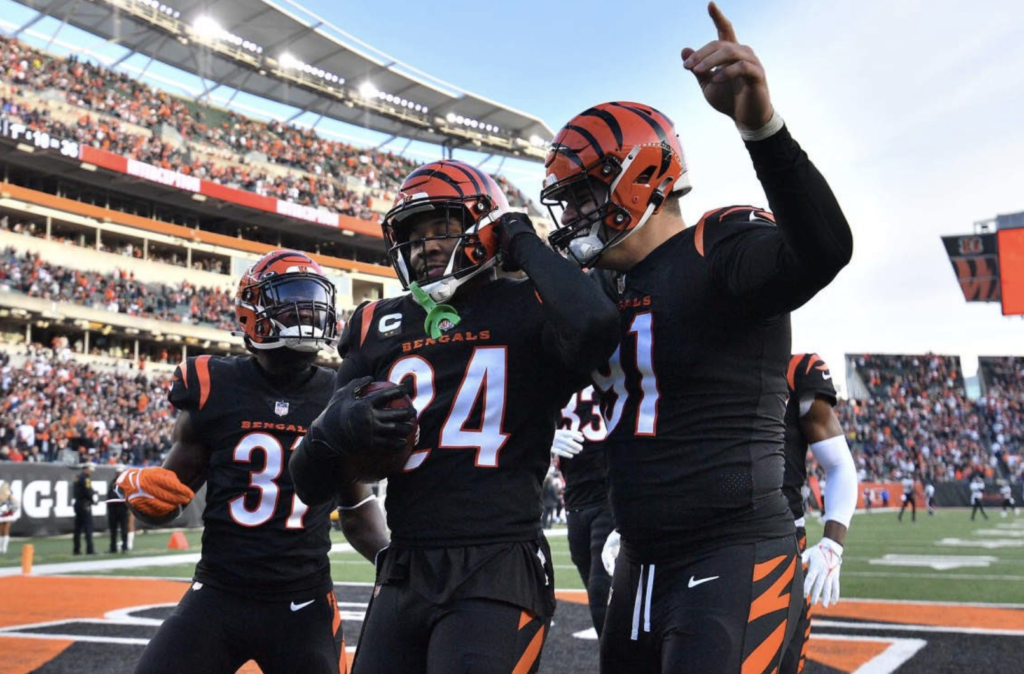 CINCINNATI — The Bengals are blessed with a deep and talented secondary. Vonn Bell is a huge part of that group and could be having the best season of his career.

Bell, 27, is in the final year of a three-year, $18 million free agent deal signed in March 2020. It’s turned out to be a huge bargain for the Bengals. And it might be time to seriously think about re-signing him because picturing the secondary without him right now is a scary proposition for the defense.

Bell has three interceptions this season, all in the last two games. All have been crucial turning points for the Bengals.

His two picks against Miami helped the Bengals hold off the Dolphins, 27-15, including one late in the fourth quarter that set up the game-sealing touchdown.

The Bengals were down 10-0 in the second quarter against the Ravens Sunday night and on their way for more when Bell came to the rescue. He interception at the Cincinnati 17 turned the tide and allowed the Bengals to go on a seven-play, 83-yard march that ended in the first score of the night for the Stripes. It single-handedly changed the momentum of the game and allowed the Bengals to get back in the contest.

None of this is a surprise to defensive coordinator Lou Anarumo.

“When we got him I think people knocked maybe his range that maybe this guy is just a box safety,” Anarumo said. “I never thought that. I never thought that at Ohio State. I thought he had range to make plays. Is he going to be Ed Reed? No, there is only one Ed Reed. He doesn’t have to be. He can be Vonn Bell. Even going back to last year that play on Tyreek in the first Kansas City game is as good of a range play as you’ll find.

“You’ve got the ball in the air with (Patrick) Mahomes throwing it and Hill’s down there and he knocks the ball out. That game is different if he doesn’t. People talk about Eli’s play in the AFC Championship game, but that one was just as big. We saw that and then everything else that comes with him made that one a no-brainer for me.”

He also intercepted the Mahomes pass after Jessie Bates deflected it in overtime to set up the field goal that sent the Bengals to the Super Bowl.

Beyond the contributions on the field, Bell is the quietest of leaders in the locker room. But make no mistake his presence is unmistakable.

“He’s at the high level or high end of all of that,” Anarumo said. ” He’s the first one in the weight room. Always physically nobody is going to outwork him. He’s going to be as strong and as in shape as any player on the field and then mentally he’s constantly working, constantly asking questions, constantly studying tape. He is at the high end of what you would call a professional and he’s just a great example for these younger players to see how somebody would operate. You want to be a professional?

“It takes sacrifice and he does that. It’s all the stuff that people don’t see. First one in the weight room at 5:30-6 in the morning every day. You want to talk about being a professional athlete and doing things and people say they get paid a lot of money they should do that. Well, we all know that’s not reality. He is a special guy and he does things the right way and the more guys you have around like that the more successful you’re going to be as an organization.”

How did Zac Taylor and the front office approach the free agent Bell in March 2020, when he was finishing his rookie deal with the team he’ll be facing Sunday for the first time.

“I think it was an opportunity that presented itself, to be quite honest with you. It didn’t happen the first day, if I remember correctly right out of the gate. When Vonn Bell is out there and available, it’s something you’ve got to talk long and hard about because we always had a high opinion of him. I remember writing the scouting report for him before we played New Orleans three times one year, preseason, regular season, NFC Championship game, all in New Orleans.

“I’d give the presentation on the DBs and I remember talking a lot about Vonn and how impactful he was as a player. Again, going back to my assistant receiver (coach) days, and then I am here as a head coach and getting the opportunity to add the guy, you feel like you’ve watched hours and hours of tape. I had very high opinions of Vonn and it’s worked out well for us.”

Will those high opinions inspire the Bengals to re-sign him when the time comes in the spring? Time will tell. For now, the Bengals could use a few more big plays from the versatile safety to help right their season and get them back to the playoffs.

Vonn Bell isn’t the only member of the Bengals defense returning to the Superdome Sunday. Trey Hendrickson and Eli Apple also made big contributions to a team that fell just a terrible non-pass interference against Nickell Robey-Coleman and the Rams in the 2018 NFC Championship from going to the Super Bowl against the Patriots. Hendrickson was signed for four years and $60 million before the 2021 season. Apple was resigned for one-year at $3.75 million after helping the Bengals in their Super Bowl run.

“We do deep dives,” Zac Taylor said. “The mole for Eli was Lou Anarumo, having worked with him. I knew one of Trey’s college coaches. We grew up together at FAU (Florida Atlantic University). Vonn Bell’s reputation dates all the way back to whatever you want to research about Vonn Bell. We got Vonn first obviously, so you get a chance to talk about Trey and Eli and obviously, he wanted to play with those guys. That usually is how it works. We try to utilize the relationships we have and then if you’ve got players that have played with those guys and players you trust their opinion and their approach and they know what it takes to win championships. Obviously, Vonn was quick to say Trey and Eli being in the building would help us win championships. That went a long way for us.

“I think it goes a long way. I feel like I’ve played New Orleans so many times and have so much respect for their defense, how they were coached, the types of players they had in their unit, how they played. So then when your research verifies that they’re about what we want to be around. I’ve played them so many times. They played for championships and so they know (that) walking in the door. Two of those guys have the Ohio State background that goes a long way with us. Those guys understand some of the intangible stuff that’s important. So, it’s really for us been a home run for all three of those guys.”

Hill, 32, has been a unique weapon in the Saints offense since they picked up the undrafted free agent in 2017, after the Packers released him after the preseason. He learned his crafted as an understudy of Drew Brees and coach Sean Payton started making more use of the BYU tight end in Wildcat formations.

“Very unique. Explosive, playmaker,” Taylor said. “Just remember from his time at college, him doing all that stuff as well. Yeah you’ve got a guy back there that’s an explosive runner, but again, he’s got the background throwing the ball too. You’ve got to treat that different than you would just a traditional wildcat because he can play quarterback. Then he can go in the game and play tight end and they can utilize him in a lot of different ways that way. He can block in the run game, he can run routes, he can throw. Those Swiss Army Knives are very difficult to defend and that’s a nice weapon for them to have.”

“Utmost respect for him both as a runner and receiver,” Lou Anarumo said. “He’s one of those guys you look at a duck on a pond, they are moving. It looks effortless but underneath they are working. This guy is as fluid of an athlete – he’d be a great corner, I know that. He’s a phenomenal athlete. Just a great player in our league. Utmost respect.”

Despite what happened in the Baltimore game at the end of the third quarter and the offense’s general failures through five games, don’t expect any changes from Zac Taylor and the coaching staff on the way plays are called or the fact that Taylor is calling them. Taylor insists the collaborative method remains proven and best.

"We're all in this together and I think that's what's important to have a championship caliber team." Zac Taylor says Bengals offense play calling will remain collaborative between he and Brian Callahan. He insists no change is needed. pic.twitter.com/fh7xh2hFTX

“I’ve just got a lot of respect for the guys that we have that work with us on the offensive side of the ball,” Taylor said Wednesday. “They’re all here for a reason. They’re all just insanely intelligent, much smarter than I am and so why not use that resource the best I can, whether we’re game planning over the course of the week or we’re taking suggestions during the game or in between series. Brian and I, we work side by side every hour of every single day. It’s not even long conversations. It’s just quick things to get your brain focused on what we need to focus on. And again, it’s always been a great process that’s really served us well and that’s just how we utilize it on that side of the ball.”

“I think that’s pretty unique to this place,” Burrow said. “I think that’s what makes everyone loves being here. There’s no egos from me to our coaching staff to Zac, to Brian, to Pitch, to our receivers. It’s a collaborative effort that everyone puts in so everyone can take ownership.”