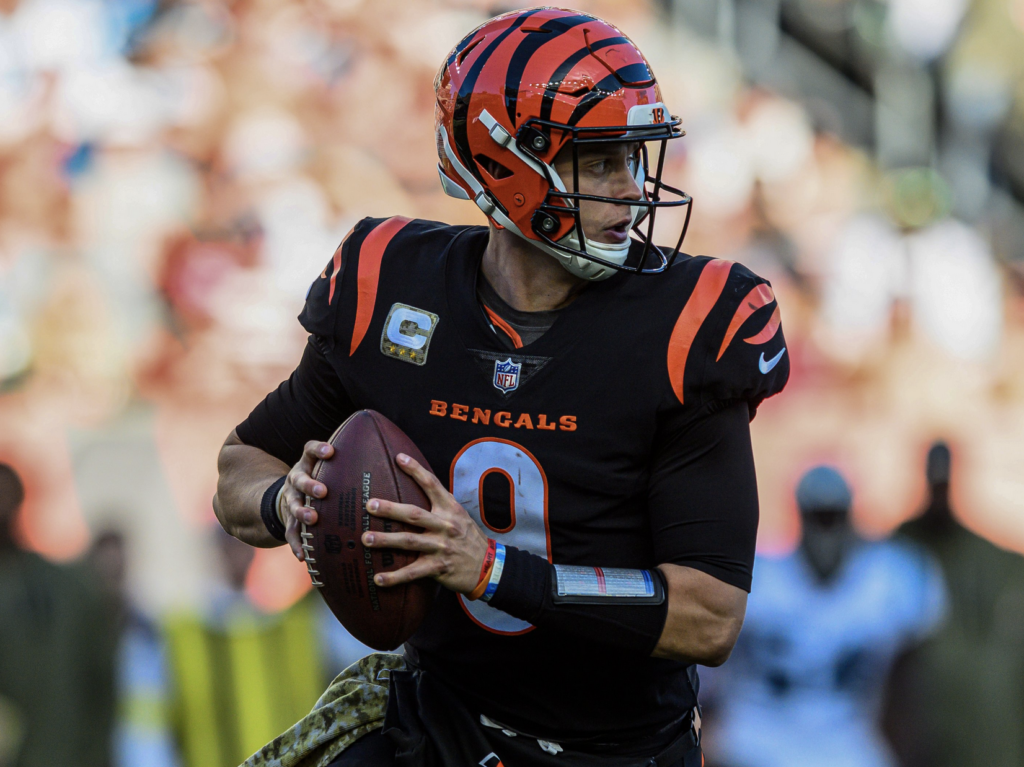 CINCINNATI — When Joe Burrow looks back at the Week 1 loss to the Steelers, he needs to look no further than the four interceptions and fumbled snap to know what went wrong.

In the first five games, his completion rate was under 70 percent, the floor of what he expects from himself. His lowest (62.3) came in that overtime loss to the Steelers.

Since Week 6 in New Orleans, Burrow has seen his completion percentage dramatically rise. The Bengals are 3-1 and the Bengals have reached 30 points in all three wins. The lone loss was Burrow’s first game without Ja’Marr Chase.

“We’ve had two games so far, one, well, not good and one really good,” Burrow said. “So, I think we have the guys out there to go and execute when we need to. A really good defense ahead of us so we’re excited about the opportunity and we’ll see when Ja’Marr comes back.”

Whether that is against Tennessee or Kansas City, Burrow and his weapons need another fast start like they’ve had against Atlanta and Carolina, not the speed bump they had in Cleveland. The Bengals have started fast only once in five road games this season, scoring 14 points in the first quarter against the Jets and jumping out to a 20-9 halftime lead.

"I'm really happy with where we're at." Joe Burrow explains why he feels – even without injured Ja'Marr Chase- Bengals offense is in good place. pic.twitter.com/aEqOEchuZ3

But in the last three wins, Burrow has looked like his late-2021 self, completing 84-of-107 passes, throwing seven touchdowns and no interceptions.

“(I’m) really happy with where we’re at,” Burrow said. “We’ve had a couple games that are not up to our standards. But I think if you look at the overall stats, we’re top five, top 10 in just about every category. We have a lot of room to get better but I think when people are saying you’re not playing great and you’re top five, top 10 in all those stats, I think that’s a good spot to be in.

“It’s just being consistent. We’ve had, like I said, two, three, four games that are not up to our standard. And we’ve had some (where) we’re scoring just about every time we touch the ball. And so, it’s just being more consistent.”

Sit back and enjoy 🍿

What stat means the most to Burrow when evaluating his game? It’s all about completing as many passes as possible.

“I definitely look at it because at the end of the day, you’re judged off wins and losses but you’re also judged off how statistically good you are,” Burrow told me. “I would say I would just look at the overall completion percentage has always been a big one for me I feel like that’s where I should be the best. You just look at the overall body of work I would say.”

And the 78.5 percent completion rate in those three wins?

Burrow has completed 233 of 333 passes this season, putting his percentage right at 70 percent, with eight games left.

The other areas that show Burrow’s progress are on third down and red zone. The Bengals are converting 49.5 percent of third down chances – good for third in the NFL – and 72.4 percent of TD chances inside the 20, putting them fourth in the NFL.

What did he learn from the Pittsburgh loss and the loss to the Cowboys the following week?

“I don’t know if it changed the way that I play,” Burrow said. “It just kind of reminded me how to win games. You have to treat each game individually. You can’t go out and just have a stock performance each week, every game requires something different of you to go out and get the win. I think we’ve been really good at that the last 5-7 games.”

“I’m not coming off an appendix surgery. I’m just going to be smarter with the ball, I’m not going to throw four interceptions,” Burrow promised. “That’s an outlier for me. So, that’s my plan going in.”