Mixon all in on "getting down and dirty" with his offensive line. 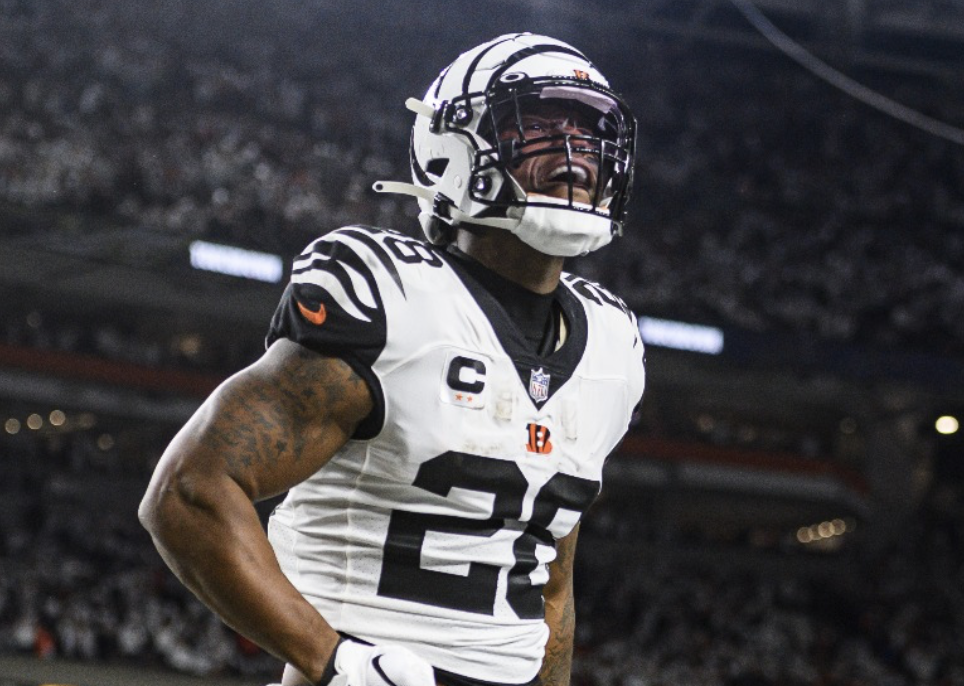 CINCINNATI — When your star running back calls a meeting with the group largely responsible for his success or lack thereof, you know he’s serious about getting things going in the right direction.

Joe Mixon has had meetings with his offensive line before, like in 2019, when things were sluggish to start. Sluggish is actually an understatement. Mixon’s season began with games of 10, 17, 60 and 62 yards. His first four games this season: 82, 57, 24 and 61 yards.

His breakthrough that season was 114 yards on 31 carries on Nov. 10 against Baltimore. He finished with a flourish, with games of 146 yards, 136 and 162 yards in three of his last four games. In 2019, he finished with 1137 yards for a 4.1 yards per carry average. This year, Mixon – averaging 2.7 YPC in the first four games – isn’t about to wait till November to get his run groove going.

So, when he called a pow wow with his road map guides last Wednesday before Thursday’s showdown with the Dolphins, Mixon knew there was much more potential to be tapped into, with a bigger goal at the end of the road.

“Yeah. For sure. Them boys put in the work. Last week, we even had a meeting. I called for a meeting with them just to see what they’re thinking on certain runs or what they think I should do on certain runs. I feel like that will definitely be beneficial down the road and taking that next step on coming together and building that chemistry on and off the field. I think that’s going to take us a long way down the road so I look forward to it.”

I’m very optimistic (about) the numbers coming and being able to produce like I know how and like our linemen know how they can do. I have no worry and no doubt in my mind that the running game is going to take off.”

Mixon is right to be confident about his prospects going forward. This Bengals interior line is clearly gaining push with every game. It’s obvious from watching the film and it’s obvious to the naked eye, like on the opening drive vs. Miami, when the rugby scrum ended in the end zone with Mixon’s first rushing TD of 2022.

“I felt like there’s more to come to that,” Mixon told me. “I look forward to getting down and dirty with those guys. I know we’re literally super close to taking off and the big plays will come. I’m as patient as ever, but when my time comes I’m definitely going to seize the opportunity for sure.”

But there are still bumps in that that road to be smoothed out. Like in the second half, when the Bengals – trailing 15-14 – were driving for the go-ahead touchdown and Mixon got stuffed for a one-yard loss. The Bengals settled for the field goal but there was a growing frustration from Mixon on the sideline that was obvious.

“It’s frustrating because obviously you want the stats and things like that,” Mixon acknowledged. “But I’m definitely encouraged because if you watch the film, we’re literally just one piece away or one block away. Whether it’s frontside, backside or me seeing something and actually hitting it faster. Everything goes hand-in-hand. But my third year when I was here, I probably had 200 yards, barely, in eight games.

“And then all of a sudden, I damn near had like a thousand over the back end. I mean, I’m not really worried about that. But we definitely got room to improve to get better. I look forward to coming to work and doing that.”

So what exactly did Mixon discuss with his “down and dirty” bunch up front?

“It was really just mastering what we have to be as an offense and what we want to be on the offensive side, like running the ball,” Mixon said. “We want to be physical. We want to get after the defenders and wear them down in the game, and obviously finish the game off pounding the rock. We’ve got guys on the perimeter that obviously we’ve got the best tandem in the league with receivers. But we’ve just got to keep on building, putting it together. We’ve got Joe Burrow. We’ve got a very unselfish offense. We definitely look forward to putting up numbers and obviously winning games, which is most important.

“It was pretty much just building that chemistry and having them see what I’m seeing on certain blocks, or if they could just torque a guy a different way or if they could just cut somebody off backside or I could just hit this a little faster or hit backside. Just little things that we didn’t see over the course of time. Like I said, I’m very optimistic. I haven’t lost (any) confidence in the run game and what I’m capable of and I know they’re capable of.”

All of these words from Mixon give Zac Taylor peaceful, easy feeling about his run game eventually finding its next gear and getting up to speed.

“He’s about all the right stuff,” Taylor said. “That’s why he’s elected to captain. He’s a guy that our coaching staff has a great relationship with, and so that’s why he’s a captain, those guys that take on those responsibilities. I think there’s a great bond between our running backs and our O-line room and our tight ends. That’s critical. Been encouraged by all the feedback we get from those guys.

“We’ve got a high level of trust with our players to where there’s never any concern of anything that’s being discussed. They know we’ve got open doors and plenty of times we talk through schemes with players and things that can be helpful on their end, on our end. I think that’s the best way to be successful going forward is for everyone to understand the why. What’s the intent of what we’re trying to do and how can we make it better. No egos there. That’s the best way to proceed for us.”

The Bengals are 2-2 heading into Baltimore, tied with the Ravens and Browns atop the AFC North. Mixon believes the Bengals are in position to take off and take control of the division, despite the 2-2 start.

“Exactly. As long as we do our part, everything falls into place,” Mixon said. “That’s what this game is all about. Winning is hard and we don’t take that for granted around here. Everything just falls into place and we just have to capitalize on our opportunity ahead of us.”

Tee Higgins and Germaine Pratt seem to be on track for playing Sunday night in Baltimore. Higgins had to have his left ankle taped during Thursday’s win over Miami and was walking with a slight limp through the locker room on Friday. Pratt played through his knee issue on Thursday, playing in 42 of 64 defensive snaps.

Don’t tell Zac Taylor that Ravens QB Lamar Jackson has improved his passing skills this season. To Taylor, the 2019 NFL MVP has always been an exceptional passer. He’s coming off a game in which he completed 20-of-29 passes but couldn’t put up any points in the second half of a 23-20 loss to the Bills in Baltimore. He threw for 144 yards and a touchdown but threw two interceptions, including one on fourth-and goal from the Bills 2. Jackson is completing 65 percent of his passes this season, a point above his career average and has a passer rating of 105.1 this season. Last year, in Jackson’s only game against the Bengals, he completed 15-of-31 passes for 257 yards and a touchdown in Cincinnati’s 41-17 win in Baltimore. He also ran for 88 yards on 12 carries.

“He’s always been an exceptional passer,” Taylor said of Jackson on Monday. “He was the MVP, whenever it was. Every time we’ve played him, he’s difficult to play with. I don’t look at him like, ‘Wow, he’s better.’ He’s always been top-notch and he’s always been a force to deal with. He’s given every team he’s ever played with problems. We’ve got to work like crazy to have great plans for him and the rest of the offense because of the problems that he poses. To say that he looks better this year, he’s always been a thorn for everybody he’s played against and been a tremendous passer.

“He throws from any arm angle, any body angle, any distance on the field with pinpoint accuracy and has a great knack, especially with Mark Andrews, they’ve got such a great chemistry together. You can see that forming with a lot of the other guys, (Rashod) Bateman and (Devin) Duvernay and Isaiah Likely also. Just a tremendous amount of respect for him as a football player. I’d hate to minimize that he looks better this year, because he’s always been a force to be reckon with.”

Joe Burrow Tuesday announced the launch of a nonprofit foundation – along with his parents, Robin and Jimmy Burrow – to help meet the needs of families who are working to overcome food insecurity and childhood mental health issues. The Joe Burrow Foundation will provide resources and support to the underprivileged and underserved in Ohio and Louisiana.

“I believe that everyone has a responsibility to do good,” said Burrow. “This Foundation allows me and my family to give back. So many of you made generous contributions to support food insecurity in Athens County, Ohio following my 2019 Heisman Trophy speech. We will build on our efforts to tackle food insecurity by also finding ways to offer up support in Greater Cincinnati, other parts of Ohio, Baton Rouge and Louisiana. My mom, a lifetime educator, experiences firsthand the effect of mental health issues on children and their families. We want to make a difference here as well.”