Burrow aims for a 3-0 start in his rivalry against Mahomes. 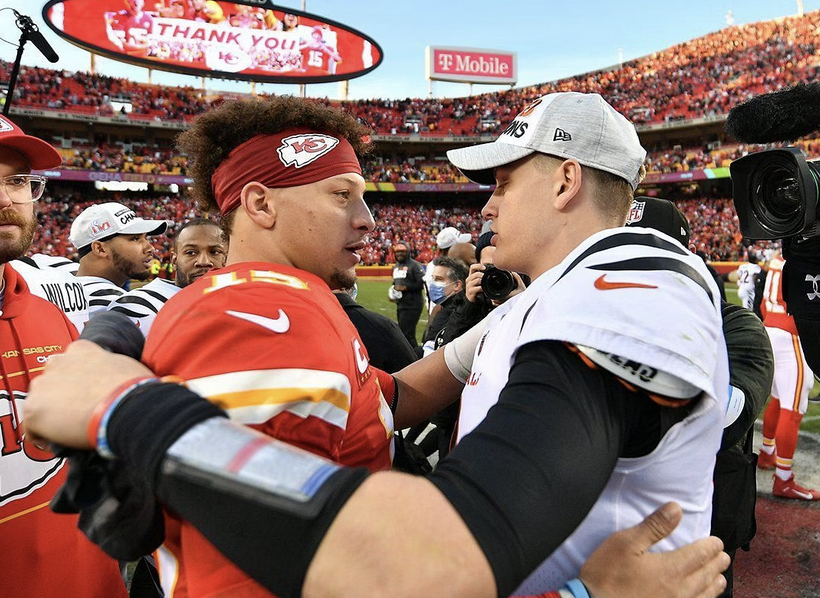 CINCINNATI — The Bengals have reached the meat of their beefy schedule. And these Bengals believe they have the teeth to grind through it and come out stronger on the other side.

Starting with Patrick Mahomes, Travis Kelce and the 9-2 Kansas City Chiefs, the Bengals play four teams in playoff position and another (New England) fighting for its playoff life.

Coming off two road wins, including their gut-check win over the Titans, the Bengals have momentum on their side as well as the confidence that comes with showing they can win without two star players on offense and their top defensive player in the secondary.

They are 3-0 since Chido Awuzie went down for the season with a torn ACL. They have had to lean on Eli Apple more and rely on a rookie cornerback who had no game snaps in the preseason and none in the first six weeks. This is why the Bengals feel so confident about the chemistry in the locker room.

Ted Karras telling Tennessee to do something physically impossible after getting a couple of cheap shots from Jeffery Simmons and the Titans defensive line at the end of the game Sunday is a perfect metaphor for where the Bengals are mentally right now.

They’ve got their growl and they believe it’s only going to get louder.

But there’s no doubt that their biggest test is coming up this weekend with a Chiefs team that is again hitting its prime with Patrick Mahomes, a quarterback that is the heart and soul of the top team in the AFC.

I’ve seen this before. So has Tyler Boyd.

“It’s going back to that quarterback fight,” Boyd said Monday. “I look at it like Manning and Brady. You can’t stop them. It comes down to whoever excels and takes advantage of their opportunities in drives and scores points. These are the types of games that we have to take care of the football and not turn it over.

As someone who covered the Patriots and Tom Brady for his entire run in Foxboro, and was incredibly privileged to have a front row seat for one of the best rivalries in NFL history, I can see exactly why Boyd sees the similarities.

Tom Brady and Peyton Manning. Those two names defined NFL offense for two decades. Between them, they have nine Super Bowl rings. They had an unparalleled rivalry that was must-see TV every time they squared off.

The Indianapolis Colts and Manning in the early-to-mid-2000s would always have the firepower and the great regular season records coming into the season. They were unquestionably the best offensive team in football with a hall of fame quarterback, receivers Marvin Harrison and Reggie Wayne, tight end Dallas Clark and star running back Edgerrin James.

The New England Patriots, even when they were winning 14 games, would come out every year and play the role perfectly of that team in the weeds that everyone would overlook because they didn’t have all the media darlings that the Colts possessed. The Patriots had Tom Brady but he didn’t put up the Madden numbers Manning did every week. They had the likes of Troy Brown, Kevin Faulk, and David Patten at receiver and Antwain Smith and Corey Dillon as backs.

But the oft-overlooked factor in this rivalry early on was New England’s defense. The Patriots and Brady dominated from 2001-2005 because they had so many playmakers, like Rodney Harrison, Tedy Brushchi, Willie McGinest, Ty Law, Vince Wilfork and Richard Seymour.

This is where the Bengals might just have the same advantage. It would be an even stronger argument if Awuzie wasn’t lost for the season but still, take a look at the speed of the Bengals defense with the likes of rookies Cam Taylor-Britt and Dax Hill, veteran safeties Vonn Bell and Jessie Bates and veteran corner Eli Apple.

Linebackers Germaine Pratt and Logan Wilson are playing at All-Pro levels and DJ Reader, BJ Hill, Trey Hendrickson and Sam Hubbard on the defensive line. And you have 5-foot-10 Mike Hilton bringing down the Derrick Henrys of the world.

The Bengals defense is about as loaded as any in the NFL. This is how Bill Belichick built his defense to handle Manning. This is why Lou Anarumo was able to do so much in the second half of the two games against Mahomes last January.

That’s why the Bengals rightly believe “they gotta play us.”

So who is Manning and who is Brady in the Burrow-Mahomes comp?

“It’s Burrow and Mahomes. I wouldn’t compare them,” Boyd said, hedging a bit on his initial comparison. “Those are two guys with records for fastest two quarterbacks to reach 10,000 yards. It’s hard to stop Burrow and hard to stop Mahomes. At the end of the day, Burrow is two up. Whichever one you want to pick, whoever got the most wins, there you go.”

Right now, Burrow does lead, 2-0. Brady won the overall series, 11-6, including the first six meetings. Brady won their first two playoff meetings before Manning broke through in Jan. 2007. After moving to Denver, Manning won both AFC title games in 2013 and ’15 to finish 3-2 against Brady in the postseason. It wasn’t until the Broncos beefed up their defense with the likes of Von Miller, DeMarcus Ware, Derek Wolfe and Aqib Talib and Chris Harris Jr. that Denver finally got past Brady and won the Super Bowl.

Burrow not only has the lead in the head-to-head but has a defense that compares favorably to New England’s unit in the mid-2000s. But Mahomes has two Super Bowl appearances to Burrow’s one and Mahomes already has a Super Bowl ring that Burrow narrowly missed in LA. Mahomes has reached the AFC Championship in each of his three previous seasons as Kansas City’s starting quarterback.

“I’m sure that’s the narrative that people want to make of it, but we feel like it’s just two good football teams,” Bengals coach Zac Taylor said. “We’ve got a lot of respect for Patrick Mahomes. He’s a great quarterback and everything that comes with that. But again, we just see it as we’ve got a really good football team that we’ve got to prepare for on all phases. They’ve done a good job this year. They’ve got a great history in November and December and have won a lot of football games. Our guys are up for the challenge and we’re excited for the opportunity.”

To be fair, who’s who in this rivalry comparison is still to be determined.

The Chiefs are defined by Mahomes and the offense. The Bengals have Joe Burrow and a myriad of offensive weapons but a defense that has risen with guile and determination, winning in places like New York, New Orleans, Pittsburgh and Tennessee.

Consider this rivalry from a defensive back’s point of view. Burrow (18) and Mahomes (16) have the longest streaks of games with at least one TD pass. Burrow, who likely gets Ja’Marr Chase back this week, has six touchdown passes and one interception in his two games against KC. Mahomes has five TDs and two interceptions. There’s a lot to consider and a lot of weapons to defend.

“They both are young in their age and they’re top in the league,” Vonn Bell said. “They just scan the field so well and always know what the defense presents them. You just have to give them the answer to the test later on through the progression. You can’t give it to them right off the bat, because they’re so good and dynamic. They’re always making the right reads and right checks to get guys in the best position to win. That’s what makes them tough.”

Brady beat Manning on his way to the Super Bowl in 2003 (AFC Championship) and 2004 (AFC Divisional) and Manning got Brady in the 2006 AFC Championship when the Patriots couldn’t hold a 21-3 lead indoors against the Colts. The rivalry shifted when Manning took over the Broncos in 2012.

We can only hope for a rivalry that comes close to Brady-Manning in excitement, longevity and unforgettable games.

The Bengals are hopeful of getting Ja’Marr Chase back this week against Kansas City after missing the last four games with a hip injury.

“Still the same, we’ll see where we are at on Wednesday and how we can integrate him into practice,” Zac Taylor said, before adding, “I think it was just more he was off of it for four weeks, last week allowed him to get on the grass and run routes. Now, not playing in that game, he could’ve had the contact, but it was really good to get him a week of back into football mode and now next week and again take it day-to-day to see where he’s at and I think we’ll all feel better about a guy coming off an injury whose actually had a week of practice.

“That’s what you get to do with the those IR guys often times, I know he’s a week earlier than that, but you get the 21-day window to get him back into the feel of things before putting them back out there on the game field. I feel like we’ve handled this the right way.”

Chase, at the time of his injury, led the Bengals in touchdowns (6), yards (605) and catches (47). While hopeful, Taylor insisted his optimism is contingent on Chase’s work this week.

“He continues to do his workouts with Joey (Boese) and the training staff,” Taylor said. “I think they will back him down (Tuesday) some to give him the best chance to do as much as we feel comfortable with him doing on Wednesday.”

As for Joe Mixon, he continues to work through concussion protocol after his injury in Pittsburgh on Nov. 20.

“He’s still in it, he’s not through it yet, but making progress,” Taylor said.

Zac Taylor did it in 2021 when he began the whole ‘Why Not Us’ mantra that led to Joe Burrow modifying it to ‘It Is Us’. Taylor might have done it again before and after the Titans game when he shifted the narrative of the Bengals schedule to ‘They gotta play us.’ What went into that?

“Just the belief we have in ourselves,” Taylor said. “We don’t need motivation going into any of these games. We always know what the narrative is that our schedule is difficult. We don’t really care about that, at the end of the day as long as we put in the work, we know we got the right people in the building. We can play with anybody in the league and beat anybody in the league. It doesn’t mean we can take a day off and go into a game, I’m not saying any of that. But we know we got everything it takes to be successful team in the league and that’s really where that statement comes from. Yeah, we are going to play great teams, but we are a great team also.”