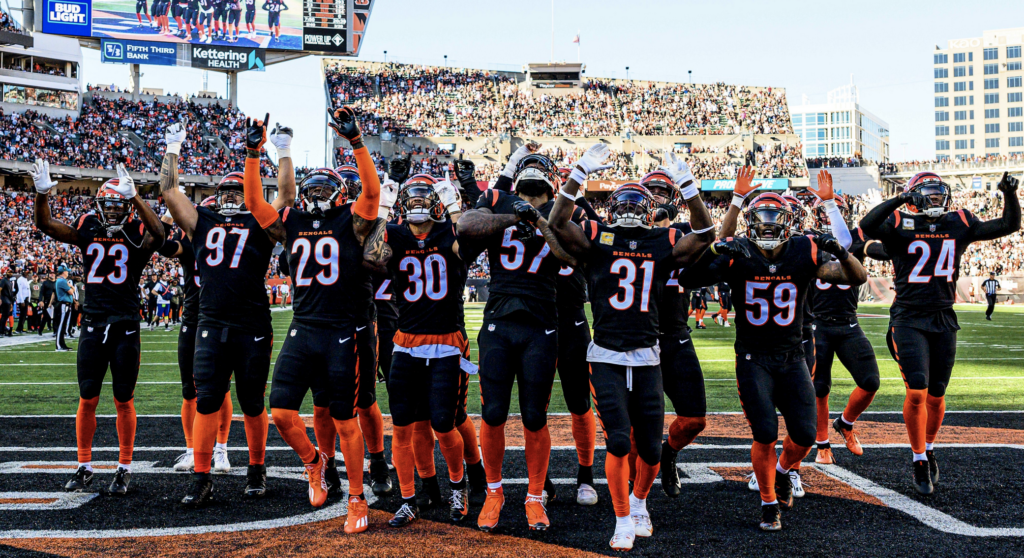 CINCINNATI — Sometimes in the NFL a tone needs to be set – not just for a game or two but for the rest of the season.

What happened at the end of the game in Tennessee might just turn out to be that tone. And the Bengals hope to be feeding off of it the rest of the season and into what they believe will be a long run in the playoffs.

Ted Karras’ now famous viral tirade directed at all of Tennessee after he took a couple of cheap shots reflected the “Take no crap” attitude of these Bengals.

These Bengals aren’t going to start fights but they’re all about finishing them.

That’s what happened in Tennessee at the end when Jeffery Simmons punched Karras a couple of times on the final victory formation snaps. Two Titans gave away the game at the end on an unsportsmanlike penalty that was called when long snapper Cal Adomitis was bowled over on Evan McPherson’s field goal attempt.

“I love Ted’s energy and passion and it was he was mad about the moment,” Bengals offensive coordinator Brian Callahan said. “He wouldn’t just come off the field doing that. I can’t imagine. But yeah, a big win and a little bit of extra on the way out. It was probably enough to get him ready to go fight everybody in the world. So I love it. I love that. I love what he’s all about. It’s a team needs those kind of things, needs that kind of energy and leadership. And then he brings it like that. It’s like he gets how he is every day. I don’t know if you guys know that, but he’s all the time like that and that’s how he is.”

Karras comes from a New England Patriots culture that bought in precisely to that mentality. Karras was around Devin McCourty, Matthew Slater, Julian Edelman, Rob Gronkowski and arguably the greatest competitor on the planet in Tom Brady.

You do your talking on the field. These Bengals will gladly laugh at your comments publicly but they have the receipts.

The Bengals have taken on that mentality. And it was again in full display this week when Justin Reid decided to dis the pass blocking ability of Hayden Hurst while confusing him with tight end Tyler Higbee of the Rams, the team the Chiefs just beat in Kansas City last Sunday.

“They have 88 — Higbee. No, it’s not. Higbee was with the Rams,” Reid said to reporters in Kansas City. “What’s his name? Higgins. It is Higgins. Higbee and Higgins. They are going to have him back. He’s a very talented receiver. More of a finesse type of guy. Not the best blocker. I’m going to lock him down. Straight up.”

Reid made a bad mistake worse when he took to Twitter to clarify that he meant to Hayden Hurst, before adding “any and everybody still getting locked up.”

That’s quite the claim to make about a receiving corps that gets Ja’Marr Chase back on top of Higgins, Tyler Boyd, Hurst and running backs Joe Mixon and Samaje Perine.

"I feel like I'm probably the last person you want to talk shit about." Hayden Hurst to Justin Reid. #Bengals pic.twitter.com/k3ky29cSMy

Higgins wouldn’t add to the conversation Thursday but Hurst didn’t miss an opportunity.

“Whoever he thought he was talking about, don’t really care,” Hurst said Thursday. “Laughed a little bit. I don’t really care. You can pick anybody in this locker room but I feel like I’m probably the last person you’d want to talk shit about because I have a long memory. It’s going to be fun. It’s funny. Obviously we see stuff. Again, you’re entitled to your own opinion. You can say what you want to say. But we know what we’re about in this locker room. Again, you have to deal with all of us.”

“We believe in ‘You come at one of us, you come at all of us’,” added Jessie Bates.

Jessie Bates on Justin Reid and the turning point of Bengals franchise when Vonn Bell laid out JuJu Smith-Schuster in 2020. #Bengals pic.twitter.com/hXBAb6ZlOY

In the Titans and Chiefs, you have the two teams the Bengals beat on the road in the AFC playoffs last January on the way to Super Bowl LVI. Maybe they just don’t believe the Bengals are really the cream of the crop. Maybe just are having a hard time accepting it.

But the Bengals just beat the Titans again, and again in Tennessee. The Chiefs? The Bengals beat them twice in a month last season but now they’re 9-2 and being heralded again as the top team in the AFC after Josh Allen’s Bills have stumbled a bit.

The Titans stirred the pot at the end of the game. The Chiefs? They’re going a different way with Reid’s preemptive dis of the Bengals offense.

The Titans were trying desperately to knock the ball away. The Bengals took the high road when talking about it this week.

“I don’t I never fault somebody for for doing everything they can to win the game,” Callahan said. “There’s still time left. They start to snap the ball, you know, and they they were they were trying to aggressively see if they could get the ball back in that spot. There was enough time for them to potentially get themselves in position if we were to screw something up there, you know, it’s not all that. Different than the Minnesota-Buffalo game where they’re on the one yard line and where they’re trying to sneak it out and, you know, you’re doing whatever you can to win.

“And I don’t I don’t blame guys for that. The extra stuff at the end of it was probably a little bit over the top. But, you know, if you’re trying to trying to see if you can fire off and swipe the ball or mess up the exchange and see if the quarterback can drop it, then, you know, so be it. I don’t think anybody has a real issue with that. It’s just more of the stuff afterwards that probably Ted was a little bit angry about. But yeah, not everybody does that. But some some people do. They’re not the only ones that have shown to do that in those moments.”

What impact will Reid’s words have? In Joe Burrow, Ja’Marr Chase, Tee Higgins and Hayden Hurst, you have intense competitors with chips on their shoulders. They all have a point to prove and pressing goals to reach.

Again, the Chiefs are the current-day Colts with all the hype around them. The Bengals are hoping to play the role of the Patriots, the team that is happy to lay in the weeds and strike when instigated.

Justin Reid has rattled the cages. Tune in Sunday to see if he regrets it.

Hayden Hurst and Tee Higgins not only were the subjects of Justin Reid’s disrespect this week, they were at the center of a friendly college bet involving their alma maters. Higgins went to Clemson and Hurst attended South Carolina. For the first time since 2013, South Carolina beat Clemson, 31-30, in the Palmetto State showdown.

Tee Higgins pays off his bet to Gamecock Hayden Hurst after South Carolina beat Clemson. Higgins chimes in "ask him who won" when we played in college. pic.twitter.com/gQdF3D1ZT2

And as a result, Hurst had Higgins wear his South Carolina jersey in the media availability portion of open locker room Thursday. Ironic, since Reid confused exactly those two players when trying to criticize Hurst as a below average blocking tight end.

In many ways, the hit that Vonn Bell laid on JuJu Smith-Schuster on Dec. 21, 2020 changed the direction of the Bengals franchise. Smith-Schuster danced on the Bengals logo pregame and some took that as a dis of a franchise that had always been the poor stepchild to the Steelers in the AFC Central and North divisions. That was the night Bell laid one of the cleanest and biggest hits in Bengals history on an opposing player. Jessie Bates remembers it well.

“That wasn’t a good time for Cincinnati,” Bates recalled Thursday. “We weren’t very good. Coming into that Monday night game and we beat the Steelers. That was almost the start of the turnaround. I’m sure JuJu sees that. He got knocked out on a play like that against the Jaguars. It was a great hit. I’m glad he didn’t get knocked out against us because that type of stuff is scary in the game of football. I’m sure JuJu will have his head on a swivel for Vonn Bell, for sure.”

Jessie Bates on Justin Reid and the turning point of Bengals franchise when Vonn Bell laid out JuJu Smith-Schuster in 2020. #Bengals pic.twitter.com/hXBAb6ZlOY