Bengals coaches own up to miscues, insist team "ready to regroup" and get ready for Dallas. 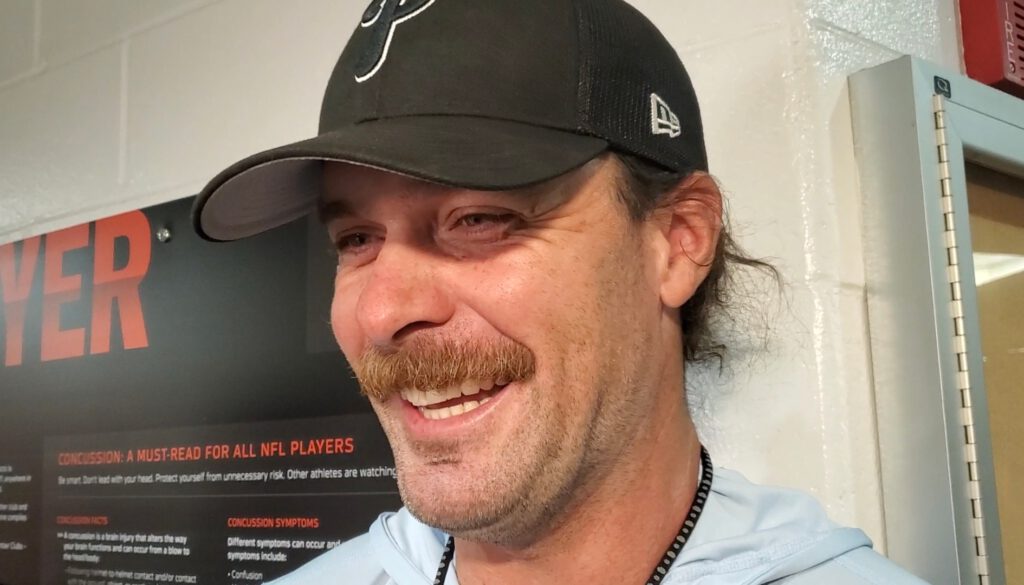 CINCINNATI — For the Bengals and head coach Zac Taylor, there were a lot of things that didn’t go their way in the final 15 minutes of Sunday’s 23-20 overtime loss to the Steelers.

There were things out of their control, like losing your long snapper for kicks and punts to a injured right biceps making a tackle on punt coverage earlier in the game.

Then there was the controllable, like taking your time and not letting the game speed up like it did on Ja’Marr Chase’s catch with 2:48 left in regulation that would’ve tied the game and given them the chance to win the game at that point.

“Just slow down. Slow down. What I could see was a bunch of incomplete hand signals,” Taylor said. “It’s literally the worst field position in football for me to be able to see over there to that far pylon through a bunch of people. So just trying to gauge that we’re not discussing an incomplete pass. We’re discussing a possible touchdown.

“Slow it down, let us see the call. I can just do a better job of taking the information I’m hearing and giving it to Joe. I was quick to spit out, ‘Hey, let’s get on the ball and snap a play here to beat their challenge potentially before realizing that’s not the issue. At the time, we still feel good about it. There wasn’t a great replay that we would have seen in the booth that would have told us touchdown.

“That replay didn’t show up until after the play was snapped. That part wouldn’t have helped us. Of course, there’s always regret when you leave seven points on the field and you don’t score. Again, it’s a unique situation that came up. I got to do a better job managing it the next time it does.”

Ultimately, of course, they did tie the game with two seconds left but missed the extra point.

That’s where Zac Taylor looked himself in the mirror and shared his thoughts with the coaching staff on Monday morning.

“Just letting the play settle on the 1-yard line to Ja’Marr and letting that be a touchdown as opposed to getting no points in four plays,” Taylor said. “That’s one you want back. That one just falls on me, to be quite honest with you. So that’s something to clean up.”

Taylor could’ve also slowed down on the mad scramble around the Joe Burrow fumble in overtime. The field goal unit was running on the field before they were told no one else could return the fumble other than Burrow himself, not Samaje Perine. The ball was placed at midfield, forcing a punt.

But instead of milking the clock down and taking seconds away, the punt team snapped with 15 seconds left on the play clock. That gave the Steelers just enough time to get down the field and kick the winning field goal.

“And then the snap at the end of the game on the punt,” Taylor said. “It’s just an unusual situation, the way that we got the punt team out there. It was a little bit of confusion with where is the ball going to be spotted, what down is it, what should be doing, going for it, kicking a field goal? Oh, we need to be punting?

“Kind of at the last second. And the clock’s running. We gotta punt. And so you don’t get a chance to sit there on the sidelines and say, ‘Hey listen guys. Let’s bleed this down.’ You’re communicating onto the field to do that. That’s an area of improvement. It’s kind of an unusual situation. I think someone in here asked me yesterday how much do you work on that situation with your backup long snapper. It’s not very often.”

"Just slow down" Zac Taylor admits the game got away from him a bit on Chase non-TD with 2:48. Biggest game-management lesson learned Sunday. pic.twitter.com/XcBcBCwEru

There was something valuable Taylor learned about his team on Sunday.

“That they responded to adversity like I hoped they would,” Taylor said. “No finger pointing when you’re down. No woe is me. Just buckled up and made plays to get us back in the game, which they did. Guys just kept trying to make one more play to help us win the game. And unfortunately it just wasn’t our day. The fortunate thing we thing is we have six days to get ready for the next one. And if we can find a way to get this win, we’ll feel good about that keep building on that. You got confidence in this locker room that it’s a talented group. They’ve worked hard. It’s important to them. Disappointed we didn’t win but they are ready to regroup and go after another one.”

Harris sustained a biceps injury that will put him out at least four months, if not for the rest of the season. But don’t think for a minute that will end his 16-year NFL career.

“I’ve had a long career,” Harris said. “I’m not gonna go out on an injury. So, gotta go out on a good note, you know, kind of the way I want to. I’m not gonna let an injury be the thing that takes me out of playing football.

“It sucks. I don’t know. Anytime I’m not out there, I hate it, especially in the middle of the game, not being able to come back and especially now. I’m going to be around the building regardless of what happens. I am gonna be hanging out with the guys, trying to help Cal (Adomitis) as much as possible, help as much as I can with the other special teams, so emotionally, it sucks. But you know, I’ll get through it. We’re football players. It’s what we do. Injurie, they happen. I just have been fortunate for the past 16 years to not really get injured.”

Cal Adomitis has big shoes to fill after Sunday’s injury to Clark Harris, someone Adomitis believes is the best long snapper in the history of the NFL.

“Life just comes at you fast and you just you do react and you fall back onto your habits and the things that I guess the things that you’ve worked to improve on through the years, and you just trust yourself that you’re prepared for the moment. And, you know, it’s been great to spend this whole OTAs and camp, you know, working with Clark because he’s he’s been, you know, he’s been an absolute class act and it’s been you know, it’s been great working with him. And he’s he’s in my opinion, I think he’s he’s the best ever do it as long snapper.

“You’ve got to learn real quick. There’s there’s a whole different standard at this level. And, you know, Clark, I don’t think he gets enough credit for the standard and the level he’s played at for, you know, as long as he has. And just the level of consistency and, you know, not only just how you snap, but you know how you practice and just how you behave in meetings and how you just have to be a consistent person because all coaches just want a sense of stability from a position like that.”

"Sometimes life comes at you fast." Cal Adomitis, who thanks Clark Harris for getting him ready for LS duties "he's the best to ever do it" pic.twitter.com/VyZ3vPZp86

The Bengals special teams coordinator wasn’t about to throw his third-string long snapper Mitchell Wilcox under the bus for the position he was placed in on Sunday. As a matter of fact, the blocked extra point had nothing to do with Wilcox, according to Simmons.

“That’s the first thing everyone sees,” Simmons said. “It is different. That’s what has the potential to throw the kicker off a little bit. It is slower and that’s the difference in the timing. That’s part of the automatic. It’s not only the location, but the speed of it. But it did not affect his hit on the PAT. When you watch it, the hit of the PAT is right down the middle before Fitzpatrick touches it. But it certainly does (matter) when the ball’s not going back as fast. We’re talking about hundredths of a second difference.”

And while Fitzpatrick blew threw the line on the PAT and past Drew Sample, Simmons said the responsibility on Sample on that play was “less than” 25 percent.

There was a lot to unpack from Sunday’s loss on Monday. The Bengals have moved on and hope to have learned from their mistakes.