No excuse for offensive impotency to start the season. 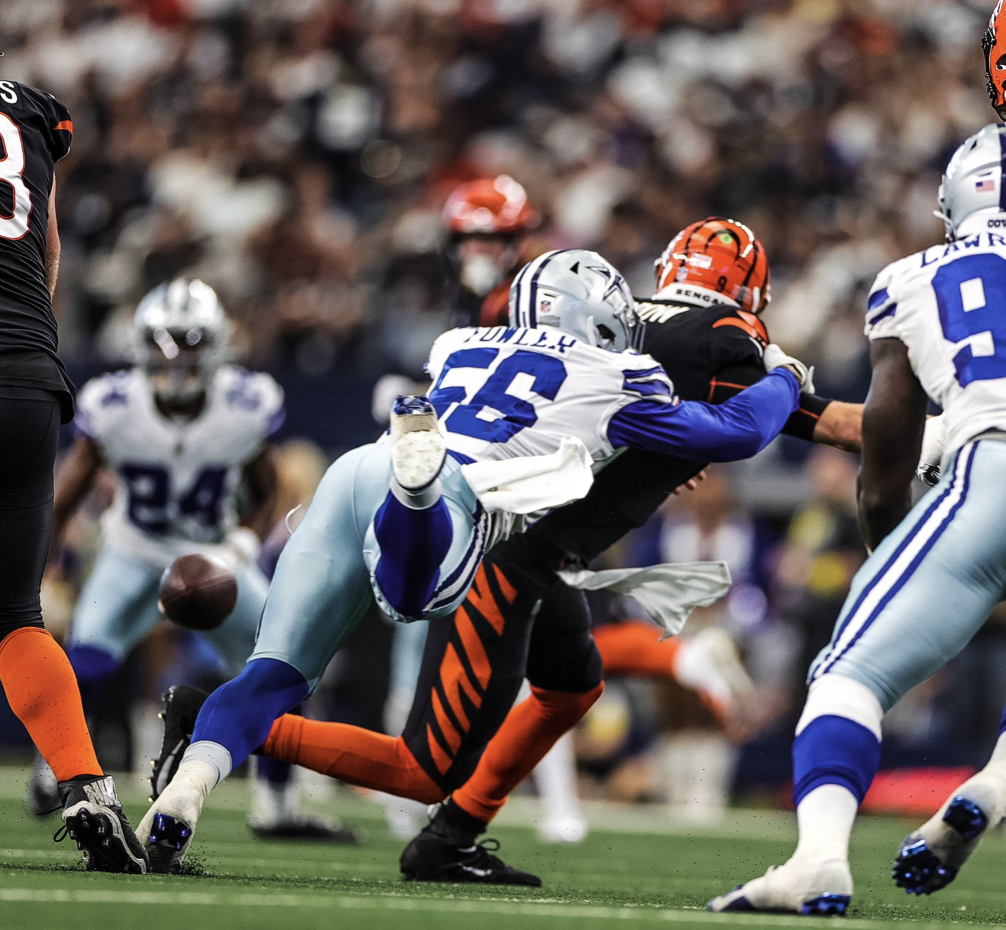 ARLINGTON, Texas — While the confidence is still there, the frustration is quickly mounting among players in the Bengals locker room. And it should. There’s no excuse for what happened Sunday inside AT&T Stadium in a 20-17 loss to the Dallas Cowboys.

What was projected as an easy part of their schedule has turned into an 0-2 hole against teams led by Mitch Trubisky and Cooper Rush.

The Bengals have not been able to get out of their own way early on in both losses. The fact that the Bengals have lost games, 23-20 and 20-17, after being down 17-3 at the half in both games is of no consequence or consolation.

They’ve been miserable to start games. And while the Week 1 loss could be written off as rust, what happened Sunday inside AT&T Stadium was an emasculation of the offensive line.

The Cowboys played with two safeties high the entire game (2-Tampa look) and dared the Bengals to try and beat them in the trenches. They failed, miserably. The Cowboys defensive front teed off all day, led by Micah Parsons, the player they knew would be after Joe Burrow in the week leading up to the game.

Dorance Armstrong, like Parsons, had two sacks and just took liberties with the Bengals tackles all day. Joe Burrow has been sacked 13 times in two games with the reconstructed offensive line that the team spent $74 million to fix. He’s been pressured 30 times over the first two games.

How about run the ball with a purpose? How about do what Dallas did coming into the game and blow teams off the ball to start the game and establish an attitude? There has been no attitude in the trenches. Remember, good teams run the ball effectively when teams are expecting it. This offense is gifted with an elite running back but who has nowhere to run.

The Bengals have handed the ball off but the holes consistently disappear or don’t even appear for Joe Mixon. Sunday he had 57 yards on 19 carries for three yards a pop, including a long of 10. Take that out, and Mixon averaged less than three yards, not exactly striking fear into teams playing a light box and taking away the deeper passes.

“I think last week was probably turnovers,” coach Zac Taylor said. “This week it was more first-and-10 efficiency. We had some false starts. We had a sack on first-and-10 play action. We had a screen that went for negative yards. We had a run that went for negative yards. We were backed up, there. It’s pretty easy in the first half to point to what the inefficiency was. It was our first downs, so now we’re not on schedule anymore and they did a good job of pinning our ears back, which is something we can’t let them do. They really excelled in that area. I thought we settled down better in the second half and we were a lot more efficient.”

The biggest highlight for the Bengals offense came when they needed it the most. Down 17-9, the Bengals put together a 19-play, 83-yard drive consuming 8 minutes, 54 seconds.

“That’s how it’s supposed to look,” Burrow said. “That’s what we need to get the whole game. Whatever we’ve got to do to move the chains on third down, find those completions and get those chains moving, we’re going to have to have a lot of drives like that, the way defenses are playing us. We’ve got to bank that one and remember how that feels.”

In the first half, the Bengals only answer for the pressure was to bring in D’Ante Smith or tight ends Drew Sample (before he injured his knee) and Mitchell Wilcox and running back Samaje Perine. It didn’t matter because when they did that, they were either missing assignments or committing false starts.

Ja’Marr Chase, for one, wasn’t pulling punches. This is a wide receiver who speaks his mind and calls it as it is. And this is what he saw:

Those deep balls to Chase aren’t hitting their mark because they’re not even getting airborne.

“Gotta take some shots. I don’t think we took any shots today,” lamented Chase. “That’s about it. We just didn’t take any shots, I don’t think.”

The most explosive player on the Bengals hasn’t been getting his shots deep because Joe Burrow doesn’t have time to throw deep because the run game can’t get going. There’s nothing to keep defenses honest.

“Every team kind of knows what you do,” added Tyler Boyd. “But at the end of the day, you have to go out there and stop it. They played a certain coverage, which we see every single day. We just have to all connect. From the line to the tight end to the running back. If we all aren’t sound, then we can’t win on plays. As long as we get everybody up to par, then we’ll be straight.”

Boyd, with more tenure than any active player on the team other than Kevin Huber, fired a warning shot.

“Just guys not being dialed in, not doing their jobs,” Boyd said. “If we just do the little thing right – if it is one person who doesn’t make a block, or one receiver who doesn’t run a certain route the right way – one person could jeopardize the whole play. You can’t point any fingers at all. Because we started together, we are going to end together. We have to find a way. We have to figure this out ASAP.”

Bengals WR Tyler Boyd says he's still "right" with his offensive line "no matter what" but things have to "tighten up" after 0-2 start pic.twitter.com/WbBjdUAgUD

Added Mixon, “We know who we have in our locker room, especially offensive-wise. The defense has been playing their ass off. They had little hiccups here and there, but at the end of the day, they are balling on defense. We have to do whatever we are going to do on offense to counter what has been going on. Everybody has to take initiative on each other and execute and start fast. We have to finish these games.”

“People are going to look back at two games last year and say something very similar,” Taylor said of a two-game skid to start the season. “These reactions always happen when you lose a game. It’s a long season. That’s what we tell our players. We’re just going to take ownership of these losses and continue to get better. We know that we have a good football team. We shot ourselves in the foot a little bit early on here in two games. Long season yet to go and our guys are going to continue to improve and play better and get some wins.”

The Bengals are 0-2 for the third time in four years under Zac Taylor. There’s no excuse for this start.