Zac Taylor insists Browns debacle is "not who we are" as Bengals flounder for answers. 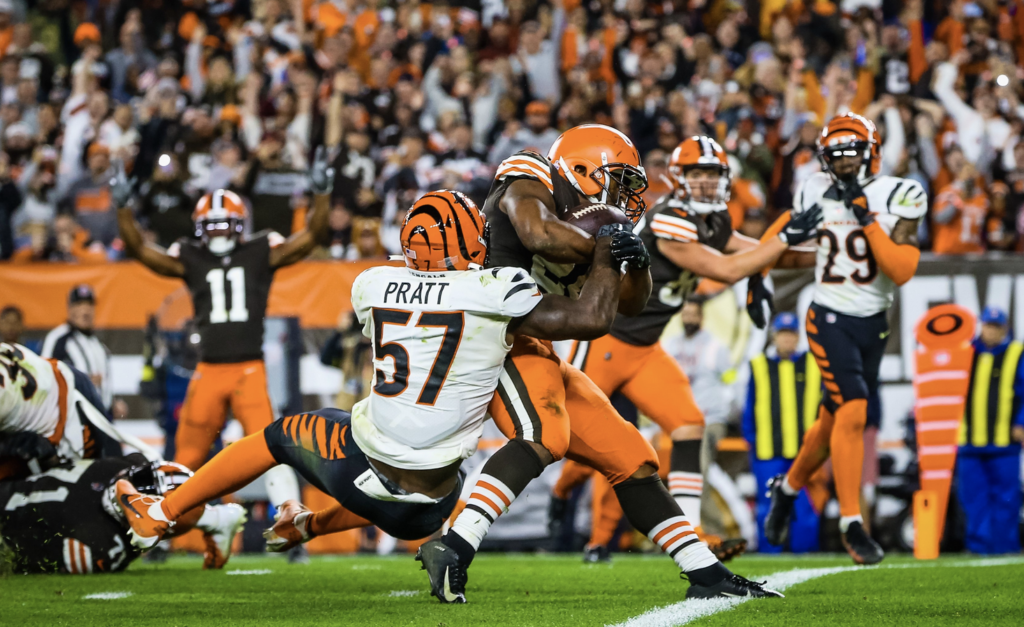 CLEVELAND — As Sam Hubbard said after Monday night’s 32-13 humiliation at the hands of the Cleveland Browns at FirstEnergy Stadium, pointing fingers and divvying up slices of the blame pie really doesn’t serve a purpose.

But neither does living in denial.

The Bengals cannot deny that even without Ja’Marr Chase for the first time this season, there was no excuse to come into Cleveland with so much on the line and completely whiff and show no resistance to a team that was waiting to have its season summarily ended before November.

Even after the game, one of their running backs – Kareem Hunt – said if they want to trade him before Tuesday’s 4 p.m. ET deadline, he’d be on board with that.

This was a Cleveland team without Denzel Ward, linebacker Jeremiah Owusu-Koramoah and a starting offensive lineman.

But they still had Myles Garrett and that alone was enough to destroy Joe Burrow’s rhythm early with a tipped pass that ended with an A.J. Green interception on Cincinnati’s first drive.

Garrett finished with 1.5 sacks, including a strip that led to a key first-half turnover. The Browns also had Nick Chubb, who again tormented the Bengals with 101 yards on 23 carries and two touchdowns.

Myles and Taven combine for a 𝘵𝘩𝘳𝘪𝘭𝘭𝘦𝘳 of a sack!

What happened to Chido Awuzie and his right knee on the collision with Browns receiver Amari Cooper is a terrible break. It leaves the Bengals without their top corner going forward. This on top of the Chase injury will be hard for the Bengals to overcome.

It felt like a double-dose of awful on Halloween. The offense played horrifically without Chase and the defense suffered a collective kick in the guy by losing one its most important pieces.

“Unbelievable, that hurts really bad,” added edge Sam Hubbard, who had his left middle finger mangled in the second half but played through the pain. “He is an unbelievable player and I wish him all the best. We are going to miss him and I do not know what happened. I just saw him on crutches and this is really tough. If you know anything about Chido, it means the world to him. He is one of the most reliable teammates that I have ever played with and not much to say other than he means a lot to this team.”

“Any time that guy goes down, it is going to have an effect, but we are a better offense than what we put out there, even without him,” Burrow told me. “There are no excuses for that.”

Burrow hit the nail on the head there.

What was a promising and nice 4-1 run heading into games against Cleveland and Carolina leading into the bye now is – at best – a 5-4 mark with the teeth of the schedule still ahead. Games that the Bengals should’ve put in the bank are gone.

The Bengals let the game get away early Monday and, while the Browns gave them chance after chance to fight their way back into it, Burrow and the offense looked entirely lost and without direction in the first half. When the Browns scored to open the second half, game over.

“It’s easy to see what this one comes down to, the way that segment of the game got away from us, this isn’t the type of team we are,” head coach Zac Taylor told me. “This is a 17-game season and this is one game. We weren’t at our best (Monday) at any phase. I’m confident that’s not not who we are, but we can make the corrections and flush this one away quickly, turn our attention to Carolina on the six-day week. Have a great opportunity to get this out of our system quickly and play next Sunday.”

All due respect to Taylor, almost half of that 17-game season is done and you are what your record says you are. You are a mediocre and remarkably inconsistent 4-4 team that hasn’t beaten a team in your division, including a pair of teams that are likely headed for rebuilding mode in the second half of the season.

The Steelers and Browns should be wins and the Bengals have managed to cough up both games because their offense had no answers in the first half of either game.

Suddenly, the Bengals feel like a non-playoff team. Yes, the injuries to Ja’Marr Chase and now Chidobe Awuzie are killers. But playoff teams find ways to fight through those and win a game against an inferior opponent, unless of course the Bengals are an inferior team right there with the Browns and Steelers.

What we’ve seen so far from the Bengals is more of the latter than the former. The Bengals right now look like a team that has squandered its chance to dominate the division and put themselves in the conversation with the Bills and Titans and Chiefs. The Bengals are light years from even entertaining that conversation.

In addition to the Awuzie loss and injury to Hubbard, Tre Flowers, another key piece from 2021, left with a hamstring injury. But Hubbard’s toughness, along with that of Logan Wilson and Trey Hendrickson does offer a glimmer of hope.

“I know the guys we got in our locker room,” Hubbard said. “There are so many leaders, I mean this is one of the best groups of guys that I have been around and I know that there will be no finger pointing. There will be a lot of people looking at themselves and figuring out what they can do individually to get better and that is how you get out of situations like this, I have been here many times before.”

"I know theres not going to be any finger pointing" Sam Hubbard who played through a mangled left middle finger. Tough effort in loss. pic.twitter.com/ZLHAWNeV8N

It will be up to Duke Tobin, the director of player personnel to decide if there are any deals to be made to account for the losses of Chase or Awuzie and whether he feels this team can recover to make a second-half run like it did in 2021.

2021 feels like light years ago after what happened Monday night in Cleveland.