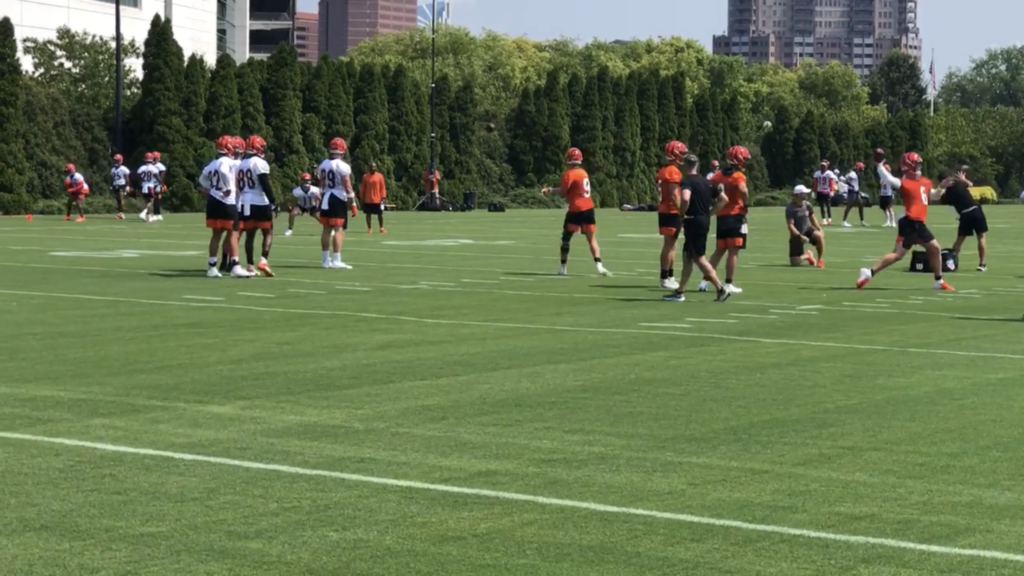 CINCINNATI — The Bengals took to the fields outside Paul Brown Stadium Wednesday in 90-degree heat with only media, staff and some observers on the Clay Wade Bailey Bridge off-ramp looking on.

The Bengals had full participation of those eligible to take part. The only four not suiting up Wednesday were DT Larry Ogunjobi, T Hakeem Adeniji, DE Wyatt Hubert, P Drue Chrisman and DE Cam Sample.

Some quick observations from the 90-minute workout:
Joe Burrow had a clean release and moved around in the pocket without a noticeable limp. He played with a brace on his surgically repaired left knee. He rolled out to his left and right several times and appeared comfortable doing so

Rookie kicker Evan McPherson out of Florida was good on all six field goal attempts at the end of practice, connecting on a long of 46 yards into a stiff breeze.

Second-year receiver Tee Higgins looks stronger and bigger this season, adding muscle to his 6-4, 215-pound frame. He won a 1-on-1 battle with veteran Ricardo Allen to make a catch outside the numbers.

Burrow’s much-anticipated improved arm strength and mechanics showed most on his out patters, firing clean strikes to Ja’Marr Chase and Higgins on quick-out routes outside the numbers and flares toward the sidelines.

The Bengals will practice in shorts and shells Thursday through Saturday, with Saturday’s practice being the first one open to the public. The players get the day off on Sunday. Taylor confirmed Wednesday that the first day of full pads will be Tuesday.

Vonn Bell had a couple of solid pass breakups, including one in which he was covering tight end Thaddeus Moss. This is not a surprise as Bell has drawn tight end coverage in the past with his demonstrated ability to play bigger receivers. Moss goes 6-3, 249.

Trey Hopkins, who blew out his left ACL in the second half of the season finale against Baltimore last season, reported Wednesday and took part in practice. He said he feels very confident that he’ll be ready to start at his customary center position once season begins.

Defensive tackle DJ Reader clarified a tweet he sent out recently criticizing the NFL policy on trying to force players to get vaccinated heading into the season or risk having their teams forfeit games if they are found to be spreaders of a COVID outbreak.

How do you feel about the current COVID situation?

“I’m actually fully vaccinated. So when I sent out that tweet, I was really saying that guys shouldn’t be forced,” Reader said. “They’re saying they’re not forcing guys, but there are all these stipulations and all these things you can’t do or what you’ll cause for your team or the other team. It’s just like it’s forcing it right in your face. I’m not a big person on forcing people to do things. Especially a vaccination. I have a child. I make sure I vet every single thing I do before I give it to my child as a father.

“As a human, I feel like you want to do that with a choice. It’s something that wasn’t part of your routine until this year. A lot of people have it and a lot of people don’t. But forcing somebody is just wrong and that’s how I’m going to stand on it. I don’t really have much to say about it. t. If they had said it was mandatory, that would be different. But you said it wasn’t mandatory and then you said it is mandatory. The emotions in me, I was really upset. The way it was pot out, the way it was said. All those things.”