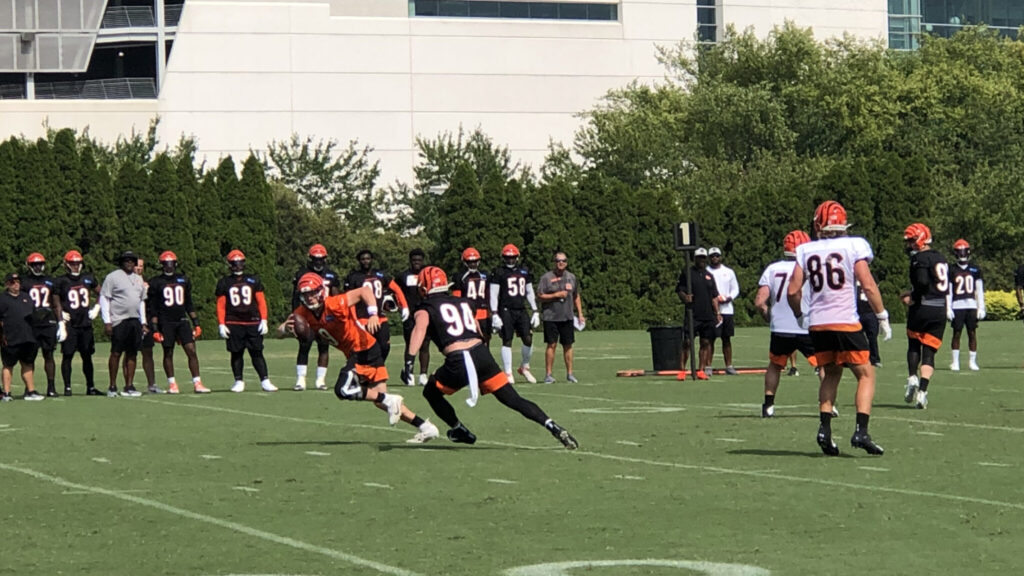 CINCINNATI — Another day, another hot, humid conditioning practice as the Bengals added shells to their shorts and helmets Friday afternoon outside Paul Brown Stadium.

The team worked out for one hour, 45 minutes and finished again with a kicking drill as Austin Siebert and rookie draft pick Evan McPherson squared off.

It was a stalemate at the key position that has drawn a remarkable amount of interest among fans early on this summer and figures to be one of the primary position battles to play out in the three-game preseason.

“I’m not trying to be a D-bag or or mean or anything. I’m just trying to get better myself.” Austin Siebert on kicking competition with rookie Evan McPherson. Both were 4/4 with longs of 53 Friday. And plenty to spare. #Bengals pic.twitter.com/lqVzU0LGkm

Both kickers connected from 37, 41, 47 and 53 yards and alternated between left and right hash marks. Both kickers showed off leg strength, connecting on all four with plenty to spare.

Friday’s practice was the final one before Saturday’s 3-5 p.m. workout inside Paul Brown Stadium for fans. That workout will be the only one this camp inside the stadium and will also be in shorts and shells. The players have Sunday off before a workout Monday. The first full pads practice is Tuesday outside PBS.

Some other highlights from the session:

Joe Burrow had an uneven day in goal-to-go passing situations. He could not connect with Tee Higgins or Tyler Boyd in the back of the end zone but did hit Ja’Marr Chase on an in-cut for a touchdown.

Burrow (featured in photo at top) also showed that his left knee can handle the rigors of escaping pressure in the pocket as he eluded Sam Hubbard.

#Bengals could get used to this. Burrow to Chase on in-cut for 6. pic.twitter.com/Y11fsDCikP

It was a good day for Bengals back-up QBs as No. 2 Brandon Allen connected with Mike Thomas on sideline patterns, with Thomas making diving toe-touch grabs.

Tyler Boyd made a point in his media availability before practice that both he and Joe Mixon are trying to take up some of the leadership void with Gio Bernard and A.J. Green gone. Mixon showed that off by congratulating Thomas on one of his catches and Chris Evans on another.

Asked Tyler Boyd about the leadership he and @Joe_MainMixon bring to these #Bengals pic.twitter.com/DWgHhKq5jF

Brandon Wilson showed the burst of speed in the kickoff return game that he featured many times in 2020, including his 103-yard kickoff return against the Giants at Paul Brown Stadium. Rookie free agent Pooka Williams Jr. also saw time returning kicks.