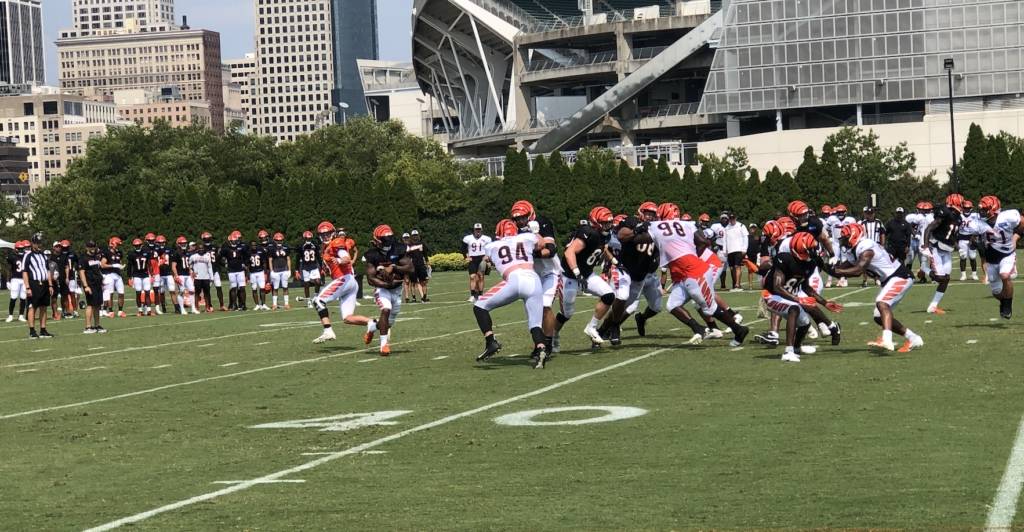 CINCINNATI — Joe Burrow said before Saturday’s practice on the scorching fields outside Paul Brown Stadium that he just needed real reps to start to feel a rhythm.

He kept true to his word, going 9-for-10 for 71 yards in a full 11-on-11 scrimmage, including a 29-yard out fade completion on 4th-and-5 to Tee Higgins to keep the second of three drives alive.

The drive was capped off by a nice 5-yard swing pass to Joe Mixon to the one (which ended with Mixon actually in the end zone) and a one-yard TD carry after officials placed the ball at the one.

The touchdown drive featuring six plays of positive yardage was the only highlight of the day as the offensive line struggled to find its cohesion with Burrow on two other drives.

Rookie D’Ante Smith, getting a look on the first team at left guard with Quinton Spain nursing a minor injury, was called for a false start when he didn’t hear Burrow’s cadence properly, leading to a three-and-out on their first drive. Smith was also called for a hold that stalled the third drive.

The middle of the Bengals offensive line was beaten on the third drive, with the middle of the line allowing defensive end Joseph Ossai, the third-round rookie out of Texas, to get through and ever so lightly hit Burrow.

That drive ended with the Bengals unable to convert a fourth down.

The Bengals offensive line had issues blocking for Joe Mixon, especially on cut-back runs where the backside was not seal, taking away Mixon’s ability to reverse field.

Thaddeus Moss caught a back-shoulder pass for a touchdown at the front pylon in individual drills following the 11-on-11 in a 30-minute team period featuring Burrow and Brandon Allen.

Moss was also on the hands team on the on-side drill, recovering a kick.