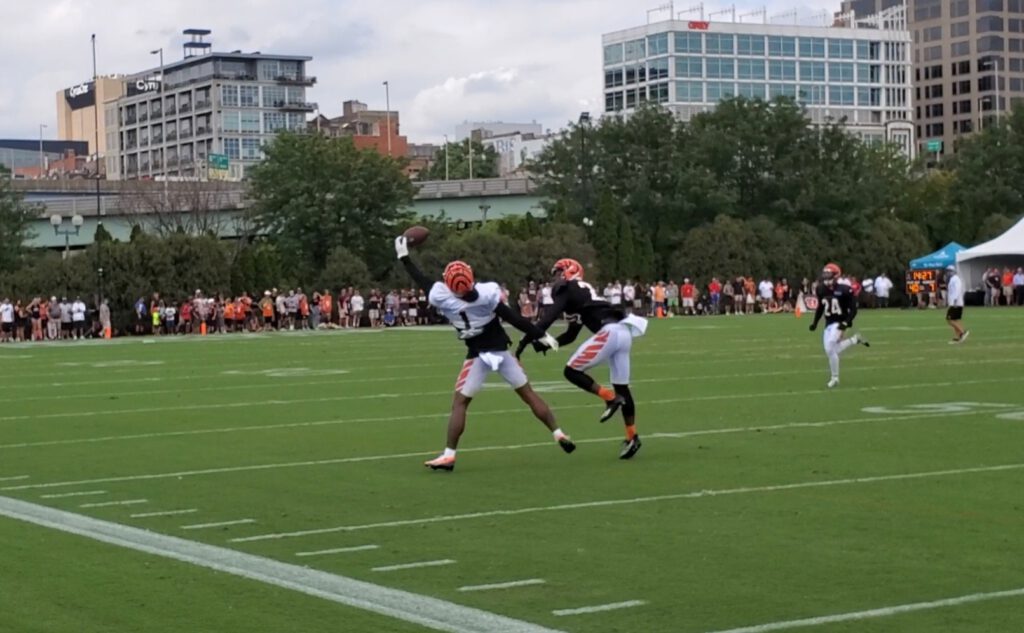 CINCINNATI – Wednesday was just what the doctor ordered for Brandon Allen, Jake Browning and the offense as they look for momentum going into Friday’s preseason opener against Arizona.

Allen completed a pair of touchdown passes in 11-on-11 drills and moved the offense with rhythm, enjoying its best day of camp.

Wednesday marked the last practice on the Kettering Health practice fields until at least Sunday, with a walkthrough on Thursday, game Friday and day off Saturday.

The day didn’t start off well as the first-team offense struggled on its first series of reps but quickly rebounded.

Looking back on Wednesday:

Chase had three catches that stood out, a one-handed grab on the sideline in front of Eli Apple while getting both feet down inbounds, a leaping grab over the middle for a first-down and a deep ball from Brandon Allen that he turned around for and shielded Chido Awuzie from while making the catch near the end zone. Worth noting that Jonah Williams looked solid, winning a clean rep and pushing Trey Hendrickson to the turf on the pass over the middle to Chase.

Chase is most certainly not suffering the drops that plagued him in his rookie season last year.

After a quiet first series, Brandon Allen over the middle to Ja'Marr Chase Wednesday #RuleTheJungle pic.twitter.com/JhFobDQehO

For the first time in camp, Bengals teammates, coaches and fans got the chance to see their brand new right tackle in full pads as Collins was cleared earlier in the day from NFI/reserve. Collins did not take part in the 11-on-11 scrimmages but did participate in individual drills. He will not play Friday against Arizona.

Maybe it was just the inspiration seeing Collins on the field in pads for the first time but Joe Mixon and the run game looked very crisp, running behind a good push from the offensive line, anchored by Ted Karras and Alex Cappa. With the right side sealed, Mixon broke off one of his trademark cutbacks off the center ‘A’ gap and raced up the middle for a big run. Chris Evans also broke a big gainer and Samaje Perine and Trayveon Willams had productive carries.

The rookie out of Kansas is looking very good in his first team reps with the offense and has shown secure hands in fielding punts. On Wednesday, Lassiter caught a short pass on the left side and outraced the defense to the sideline before being shoved out of bounds by Eli Apple. Lassiter is showing the kind of burst you want to see from a specialist and the execution of routes needed if called upon to fill in with the receiving corps.