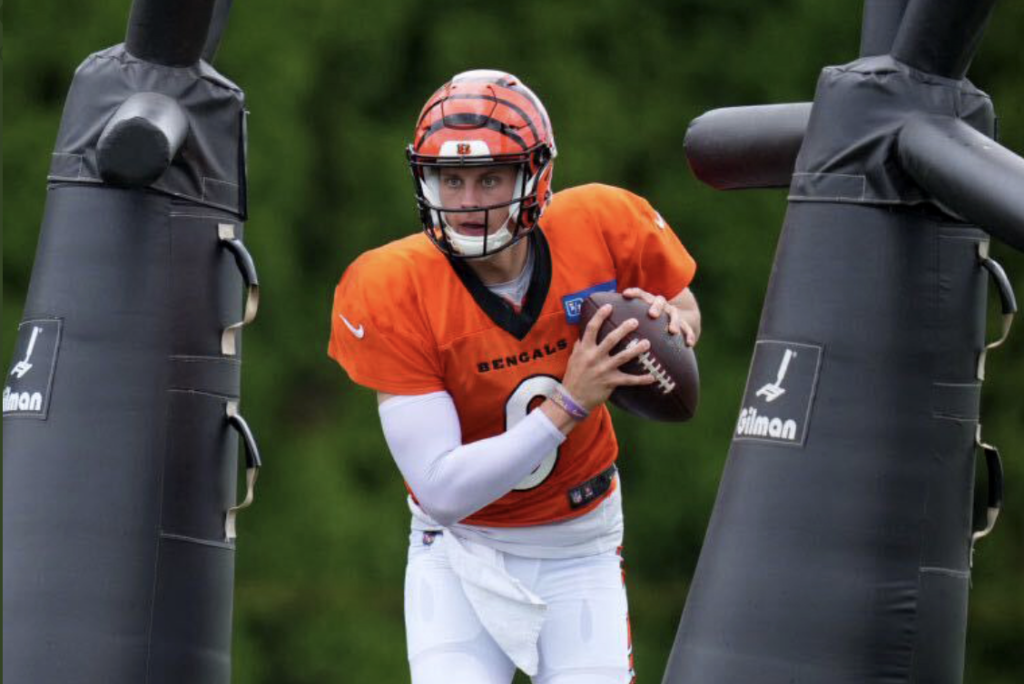 CINCINNATI – There are turning points in every season where you look back and consider its significance.

In January, the hope is that the Bengals look back on Sunday and recall how everyone’s energy around the team changed.

That boost of energy was palpable Sunday when Joe Burrow walked up the pavement Sunday afternoon in the light rain and tossed a football with Brandon Allen. Of course, the threat of rain and storms forced the team back inside for about 30 minutes which seemed an appropriate metaphor for the appendectomy that delayed Burrow’s start to training camp.

But when he came back out, No. 9 went through all the quarterback agility and mobility drills and looked good doing it, putting his passes on target to Ja’Marr Chase, Tee Higgins, Tyler Boyd and new tight end target Hayden Hurst.

Then in 7-on-7s, without his newly built offensive line in front of him, Burrow looked like he hadn’t missed a beat. After a pass breakup by Mike Hilton and a throw a bit behind Chase that was batted away by Chido Awuzie, Burrow clearly wanted to make a point to the team and likely himself that he is ready to go.

He stayed on well beyond the scripted 2-3 snaps in 7-on-7s and stayed out there for the entirety. He completed passes to Hurst and Boyd and then, just to make a further point, he stayed on with the second unit.

It’s here where Burrow shined. He dropped perfect passes in for Trenton Irwin of about 40 yards down the left sideline, Kwamie Lassiter II on an outcut toward the sideline on an intermediate route and then hit Stanley Morgan in stride on a go. Three perfect balls out of the hand of Burrow.

Burrow to Stanley Morgan on the money here. And Burrow dropped a perfect dime to Kwamie Lassiter. Accuracy is on point. pic.twitter.com/c2Pc3621bg

“He was out there throwing dots,” Irwin raved. “You all could see it. It was cool to have him back out there. I haven’t seen him throw the ball more than 10 yards since his (surgery). Actually I was expecting (the ball). It was man coverage and that was the route to win vs. man.”

Nothing creates great energy quite like your franchise quarterback looking the part in his first practice back.

“Great to see him back on the field,” Chase said. “He looks good. He’s just bringing positive energy back to us.”

“I thought he looked good,” head coach Zac Taylor observed. “It’s good to get him involved. He got some individual (work), got some 7-on-7 work. That’s a good step in the right direction.”

As for team work?

“Just taking it day-by-day so it was a good start,” Taylor added.

The Bengals aren’t going to push Burrow back into full 11-on-11s yet but the quarterback might have a different timeline in mind.

After all, a week ago, the twitterverse was abuzz about Burrow’s dad Jimmy telling Dave Lapham that it might be a “few weeks” before he actually gets on the field.

Ever since news of that podcast spread, Burrow has seemed to fast track his return, doing everything in his power to demonstrate that he’ll be more than ready for Sept. 11 against the Steelers.

Sunday was just one big step in that direction.

Other notable observations from Sunday:

The Burrow news overshadowed the significance of two key starters returning to full 11-on-11 contact. Tee Higgins practice in full for the first time since his shoulder surgery. He looked clean in and out of his breaks and caught several passes from Jake Browning, serving as the first-team QB with Brandon Allen watching from the sideline in concussion protocol and Burrow working his was back. Higgins best catch came in red zone when he ran a deep cross in the back of the end zone and leaped in between Vonn Bell and Chido Awuzie to make the TD grab.

Logan Wilson, also returning from a surgically repaired shoulder, was flying around the field with his running mate, Germaine Pratt. Wilson had good pursuit on a screen pass to Joe Mixon near the sideline and likely would have drilled him out of bounds in a game situation.

Jackson Carman needed an “extra day” of recuperation from Friday night, according to head coach Zac Taylor. Carman also apparently tweaked his elbow and will be practicing Monday with a protective brace. Carman was limited to just watching from the sidelines as rookie Cordell Volson took his spot on the first unit with Jonah Williams to his left and Ted Karras to his right. Alex Cappa saw full reps with the first team and Hakeem Adeniji was the right tackle.

The Bengals dodged a bullet when Ja’Marr Chase running a shallow dig into the end zone in red zone drills got tangled with linebacker Germaine Pratt. Pratt took the worst of it and fell to the ground before limping off. He would return. It appeared he just banged his kneecap with Chase, who was none the worst for wear after the collision late in practice.

Germaine Pratt gets tangled with Ja'Marr Chase in end zone and Pratt limps off. pic.twitter.com/ltZZ4FXKin

The catch of the day for me was Scotty Washington grabbing a pass from Drew Plitt late in practice in the red zone. Plitt threw the ball into tight coverage and Washington, playing a tight end/receiver hybrid role, reached out and grabbed the ball away like it was a crown jewel.