Competition heating up in the trenches as Bengals search for "consistency" on offensive line. 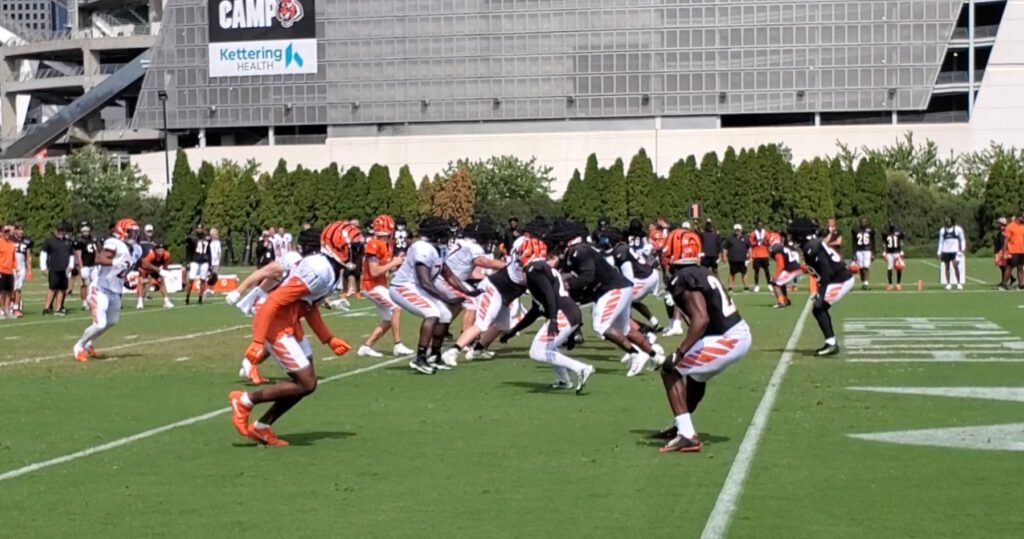 CINCINNATI – What if Frank Pollack and the Bengals offensive coaches don’t want to start Jackson Carman at left guard? What if Cordell Volson shows promise but still needs significant work on his NFL technique (as Pollack suggested Monday)?

What do the Bengals do then?

Well, we found out Monday when Trey Hill took reps at left guard with the second team offensive line.

Hill eventually moved over to center when Lamont Gaillard went down and Hill moved back to his more traditional center spot, allowing Jackson Carman (sporting a brace on his right elbow) to jump in and get some reps in 11-on-11s late in practice.

“I thought he’s doing a lot of good things,” Pollack said of Hill. “He’s another guy that’s competing for that left guard spot. He’s been valuable for us at center. He’s starting to get some more guard reps. He’s done a nice job. He’s grown a lot as a player. He’s right there in the mix with everyone else at that left guard spot.

The point here is that, as Zac Taylor also noted before Monday’s practice, the left guard situation is still fluid and still in competition mode. Nothing has been won and no role has been awarded.

The Bengals are relatively confident in four of their five projected Week 1 offensive line starters against the Steelers, in left tackle Jonah Williams, center Ted Karras, right guard Alex Cappa and right tackle La’el Collins. It’s just the one spot where no one has stepped forward to lock down after Jackson Carman was put in that role in spring and the start of camp.

Volson certainly looked strong to open the second half against Arizona but after Pollack broke down the tape, he noticed areas where Volson can improve his technique, something that becomes crucial at the NFL level, with coaches breaking down every vulnerability and trend in a lineman’s game. That’s one of the biggest adjustments going from a small school like North Dakota State to the NFL.

“Rookie in his first game. Up and down,” Pollack said. “He plays hard. There’s no question there. He’s got to be more of a technician. Play faster with his hands and feet. Typical first game stuff.

“He’s hard on himself. He’s a rookie. He’s growing. He’s learning. It’s a big step to go from a smaller school to the NFL. I lived it myself and he’s a much better player, much farther along. This is a man’s game; a man’s league. He’s done a nice job. He’s a professional. He’s shown he’s got plenty ability and strength to match with these guys at this level. It’s just about sharpening that sword and fine-tuning his skill sets.”

“I think he does a good job anchoring in pass protection,” added Zac Taylor. “When he locks up on somebody, he’s a strong guy, he’s got great grip and they have a tough time getting around him. For any young lineman it’s assessing different looks and targeting the run game and not wasting any movements and be where you’re supposed to be to help your teammates and so those are the things that I see him continuing to make progress in.

“I think Jackson’s made a lot of progress there as well. It’s a good competition, both guys have shown really well and we’re just looking for the overall consistency for someone to grab ahold of that job and move on with it.”

What this means is that the Bengals are going to have a younger player starting with a group of four veterans.

On Monday, Volson executed a block on the right side with right tackle Hakeem Adeniji that sprung Joe Mixon into the end zone in red zone work. The blocks on the right side drew a smile from former running backs coach Jim Anderson, who has been taking in some of the Bengals practices.

What will the determining factor be in the final decision?

Other notable observations from Monday:

The predictable scuffles that break out as camp winds down and players grow tired of the grind occurred Monday when offensive linemen got into with defensive edge rushers in post-practice drills. Edge Noah Spence and offensive tackle Devin Cochran tangled while in the midst of a battle. There was yelling and shoving before Pollack interceded and scolded everyone “there are no winners” in the drill. But afterward, Pollack said he wasn’t all mad about it.

“It tells me guys are competing,” Pollack said. “Guys care. It’s what o-line, d-line do. They bang on each other all day they get toward the end of camp they are tired of banging on each other for a few weeks. They get agitated. They are salty. They are competitors. Shit happens. It’s just being able to be mentally tough and play the next play and let’s go. You can’t let that escalate and be a distraction. I mean, that’s been going on for, what, 80 years? Ninety years in the NFL?”

Sam Hubbard, who was dressed in full pads, was limited again Monday to just individual work. There has been no injury designation or mention on Hubbard, as the coaches insist they are just managing many of the veterans to make sure they are fresh and ready for the season. It is somewhat odd that Trey Hendrickson has been going full speed while Hubbard has been on the sideline during 11-on-11s. Worth watching later in the week when the team returns on Wednesday.

With rookie Cam Taylor-Britt out nursing a core injury and Chido Awuzie getting Monday off from full 11-on-11 reps, Tre Flowers has been getting more looks on the outside like he did against Arizona. On Monday, filling in for Awuzie, he jumped a fourth-down red zone route intended for Ja’Marr Chase and took it 99 yards to the house.

Brandon Allen returned Monday from concussion protocol and looked solid in 11-on-11s. His best work came in marching the team down the field late in practice. His best throw came on early 11-on-11 work when he found Tee Higgins down the right sideline.

Then, late in practice, one play after a throw a bit behind Chase for an incompletion, Allen hit Tyler Boyd in stride from 25 yards out for a TD. Joe Burrow had another day limited to 7-on-7s and ran five gassers on the east practice field. Burrow worked on out patterns to Tee Higgins and wheel routes to Joe Mixon while completing a 40-yard pass to Tyler Boyd.