With Joe Burrow back on sideline watching, Bengals ready to pick up intensity with pads. 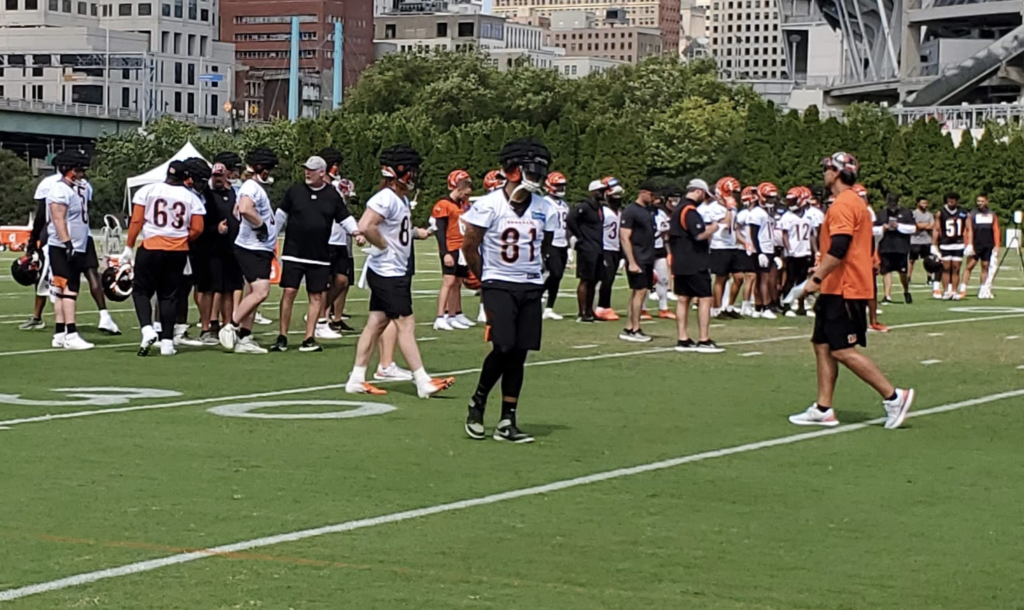 CINCINNATI – As full padded practices begin for the Cincinnati Bengals Tuesday, here are some observations from Monday and how they carry weight going forward.

Who Dey nation and the Bengals locker room was all a flutter when Joe Burrow made his way out to practice Monday for the first time since his appendectomy. He was given a silver medical scooter by the staff to make his way around in.

On second thought screw the scooter, just give me a cart. I'm good. Joe Burrow off to watch practice #RuleTheJungle pic.twitter.com/5OwwMQq8Hm

And certainly, while the intention of giving him smaller, more maneuverable individual transportation, he eschewed it for a traditional cart that he could simply step on the gas and go. Burrow spent all day out at practice watching but not participating. Expect him to do the same as padded practices begin.

“It was great, just seeing him walking in and just him being okay,” Tyler Boyd said. “Every guy on the team knows he’s a strong individual. And we know he overcomes adversity very well. And we know he will bounce back, but he gotta get right first. We’re here behind him no matter what. And we’re gonna compete with who we got.”

“Him and Jessie because missing those key guys it just doesn’t feel all the way complete yet,” Boyd continued. “So, once we get those guys back and the full connection kind of combined in one, I think that’s when we’re starting to get our mojo back, not to say we don’t, but just to have even more confidence knowing what we’re capable of when we got all of our key players on the field at the same time.”

The biggest thing Burrow (and everyone else) might have their eyes on is the offensive line. Alex Cappa took his first reps Monday with the starting offensive line at his expected spot of right guard. He was next to Isaiah Prince as La’el Collins continues to work his way back from a back issue sustained in early July.

As for the left side of the line, Jackson Carman came out midway through 11-on-11 drills Monday and stood on the sideline for the rest of practice watching. Rookie Cordell Volson got first-team reps at left guard while Jonah Williams and Ted Karras have been the anchors so far in camp, carrying on from their work in spring and OTAs.

One thing that stood out Monday was the up-tempo nature of the last shorts and shells practice for a bit. The defense was flying around, making life difficult for all aspects of the offense for all three quarterbacks.

Ja’Marr Chase and Tyler Boyd had nice grabs early in 11-on-11s, with Chase making a leaping grab on the far sideline over Chido Awuzie. But Eli Apple had good coverage in a red zone rep, during which Chase cut at the near sideline inside the 10 and made a catch. But Apple’s presence made it difficult for Chase and he couldn’t get his second foot down in bounds.

A pair of Kansas products continue to get work fielding kickoffs for Kansas grad Darrin Simmons. Pooka Williams and Kwamie Lassiter II were deep fielding kicks. Lassiter has also impressed with occasional first-team reps on offense, making a couple of solid grabs on sharp routes Monday. Lassiter is someone to keep a close eye on as we near the first preseason game on Aug. 12 at PBS against Arizona. He figures to challenge veterans Trent Taylor and Trenton Irwin for a roster spot. Also, Chris Evans was not deep fielding kickoffs from Evan McPherson Monday. Instead, Simmons was getting a good look at him on kick coverage, as Simmons and the team know already what to expect from Evans as a returner. Evans shined at moments last year (in Detroit) in kick coverage and is expected to do the same again this season.

Akeem Davis-Gaither picks off Brandon Allen and takes it to the house Monday on a good read over the middle #RuleTheJungle pic.twitter.com/3nDvxo7adR

On the last 11-on-11 snap of practice, rookie Delonte Hood picked off Drew Plitt on a far sideline pass intended for Lassiter.

The defense celebrated by mobbing Hood, who has impressed in his second-and-third team reps. Hood stands as a definitive dark horse for the back of the roster and could stick if he shines on special teams.