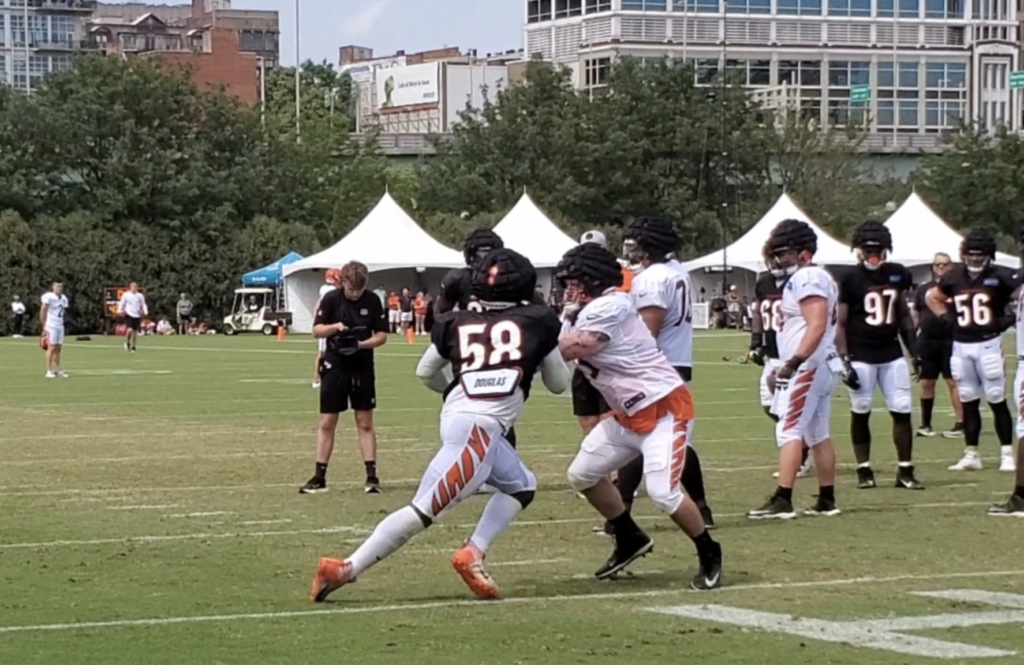 CINCINNATI – Bengals players and coaches won’t be on the practice field Wednesday but instead will have meetings throughout the day.

The day is another designed for film study and review and coaching up technique, the details that have become a priority in today’s NFL as teams try to optimize coaching time with more restrictions on practice time on the field.

The Bengals return to full padded practice on Thursday and Friday before a full players off day on Saturday.

Here, in the meantime, are some of the biggest takeaways from Tuesday’s Day 6 of training camp on the Kettering Health practice fields outside Paul Brown Stadium:

Eli Apple left practice early, favoring his left leg slightly. He headed over to the exercise bike and spent 10 minutes on it before returning to watch the rest of practice from the sideline. Tre Flowers missed his second practice and instead watched again from the sidelines in sweats and a bucket hat. Both were termed day-to-day by Zac Taylor.

Taking Apple’s place in 11-on-11s was rookie corner Cam Taylor-Britt. He had a mild confrontation with tight end Hayden Hurst after one snap as Hurst went to the ground. Nothing more serious came of it. Taylor-Britt, the second-round pick out of Nebraska, had his struggles in 1-on-1 drills, getting turned around on one route and allowing four straight completions at one point. He looked more competitive in team drills and clearly has impressed enough to earn time with the first team when Apple went down.

Tee Higgins was a full participant in individual drills Tuesday on the first day of padded practice but because he has not been cleared for full contact, he was told to take off his jersey after drills and spend the rest of practice on cardio, something he jokingly expressed his annoyance at toward the end of practice. Zac Taylor said after practice there is no reason to rush him into any contact at this point.

Zac Taylor said he told Joe Burrow to not worry about attending practice like he did on Monday, where every camera was zoomed in on his ill-fated scooter ride around the fields. Instead, he chose a traditional cart and appeared quite deliberate and slow getting up and down from the seated position before settling in to watch his three backups run the offense. Taylor still has not set a timeline for his return to practice as Burrow continues to heal from the appendectomy. Burrow’s only responsibilities for now are attending as many meetings as he’s up for and staying in touch with the team on his recovery.

The meatiest observations from Tuesday came in the individual battles between defensive and offensive linemen. Nose tackle DJ Reader squared off against Ted Karras in a draw, as Karras showed quick feet and Reader showed a good bull rush. Karras also had a good confrontation with Josh Tupou. Jackson Carman fended off rookie Zach Carter. Joseph Ossai had a good initial move on Jonah Williams, who adjusted and looked solid.

Ossai is also getting first-team looks behind Trey Hendrickson and Sam Hubbard in team periods. BJ Hill took on Hakeem Adeniji. Alex Cappa was not in on those drills but did participate in 11-on-11 snaps that stress more unit coordination and communication, especially on run plays for Joe Mixon.

Trent Taylor, Trenton Irwin, Pooka Williams and Kwamie Lassiter II were all spotted fielding punts from Kevin Huber and Drue Chrisman. Both Huber and Chrisman had their moments, connecting for booming punts. But both also had punts that left a little to be desired and room for improvement, something Darrin Simmons will likely be using Wednesday’s teaching day to stress.