Bengals lean on young players on defense and veterans on offense for depth in first 53-man roster. 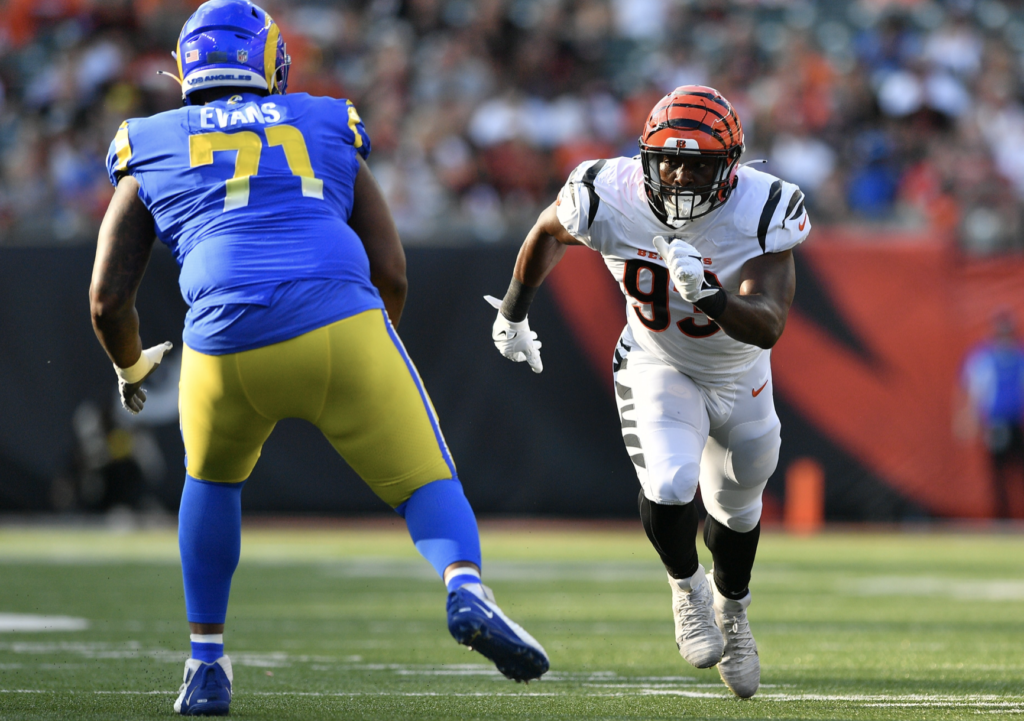 CINCINNATI – If we’ve learned anything about NFL cutdown day, it’s that we truly never know what NFL teams are thinking when filling out the back end of their rosters.

Spots that were assumed safe were met with surprising cuts.

Veterans assumed out the door were given another year to run it back with the defending AFC champions.

In other words, those roster projections are great for filling content on websites but it’s pure guesswork to try to figure out what team personnel executives are thinking as they approach 4 p.m. ET on deadline day.

If you’re the Bengals and you’re debating the quality of your punter or your third guard or your fourth corner, that’s a pretty good indication you have a deep and quality roster.

Sure, the Bengals could use more experience behind the starters at cornerback and on the offensive line. But, assuming health, this team has far fewer issues than their primary competition in the division and the AFC heading into the season.

And remember, the roster going into Week 1 is always a work in progress, and bound to change over the first two to three weeks as team needs and injury designations are made.

So, without further ado, my biggest takeaways from Tuesday’s initial cutdown:

Chrisman showed the bigger leg and was the presumptive winner Saturday night after one fair catch and a second punt that traveled 65 yards and bounced into the end zone. One does wonder if that checked at the 4 where it hit would the conversation be different? Probably not. Why? Here was Zac Taylor’s reply Tuesday. “Kevin’s had a really strong last couple of weeks of camp. He’s been consistent; we know what we’re getting there. We think we’ve got a strong football team and he brings a consistency to that that we’re aware of and we think he’ll do a really good job for us.” In other words, stick with what you know and don’t gamble for the upside of 5-10 yards in potential gross average. Yes, there is the fact that with one more game played, Huber will set the all-time Bengals games played mark, breaking the tie of 207 with Ken Riley. Special Teams coordinator Darrin Simmons insisted last week that had “zero” impact on the decision.

George’s story is an interesting one, particularly given the fact that he fills a depth need at outside corner. The undrafted defensive back out of Vanderbilt impressed the coaching staff with his ability to quickly pick up the system and improve his coverage skills. With Cam Taylor-Britt sidelined at least for the first four weeks, George slots in behind Chido Awuzie, Eli Apple and Tre Flowers. Assuming Apple is ready for the season, George is fourth on the depth chart.

“I think he had a strong last couple weeks of camp and continued to make plays when his number is called. He got his hand on the ball a number of times. That just continues what Duke and the scouting department have done here with their eye for undrafted talent. They do a really good job of putting us in position to acquire some of those guys and bringing in the right ones that have a chance to make the roster and there’s just a history of a number of years – well before I got here – of undrafted guys getting an opportunity here and making the most of it.”

Sure, Browning had two terrific fourth quarter drives against the Giants and Rams and I had him narrowly edging Allen for the backup QB spot. But barring a severe falloff in physical ability, Allen was always going to be the choice because of his familiarity with the offense, coaching staff and Burrow, himself. That was value enough not to make him a vested cut. Browning, if he clears waivers, will be brought back on the practice squad.

“Jake did a really good job of putting him in a position to be in the conversation,” Taylor told me. “I really like what Jake is about, his approach the game. You can start to see his comfort level continue to grow the more reps he got. It’s hard for these guys that don’t play in games, a number of games over the last several years, to finally get back into the rhythm that they probably had when they were at (University of) Washington and in high school, and all the things that about him. So, I think that he’s continued to improve and that he’s got a bright future in this league.”

Maybe keeping Trayveon Williams is indicative of the added priority the Bengals will place on the run game this year. The Bengals will likely have three backs active on game day, with Joe Mixon, Samaje Perine and Chris Evans getting the load. But they love the way Williams runs downhill with a low center of gravity. What’s particularly curious is how the Bengals plan to break up the back-up reps behind Joe Mixon, if they again bring in a third-down back in certain situations.

“Just needs experience,” Taylor said. “He really, over the last couple years, hasn’t got a lot of work on first and second down stuff. And so, you get an opportunity in these training camp games, to utilize that as his experience and he’s obviously got some returns for us. We’ve used him in a specific role on offense so far. But these preseason games are the ones that you really get a chance to evaluate him and Trayveon. Get them carries, get them protection reps. Get them chance to do all the things that we ask Joe and Samaje to do to see if how capable they are of handling that load if needed.”

It’s pretty clear the team likes the attitude of the second-round rookie out of Nebraska. They are confident that he won’t far too far behind and that he’ll make the most of his rehab stint that begins with the IR on Wednesday.

“During those four weeks, it’s just got to be strictly rehab and just meeting,” Taylor said. “So, I’ll tell you this about Cam, his approach has been really good since this since this happened. He’s here early in the morning, getting his stuff done. He meets extra. He’s doing everything we asked him to do. So, I’m optimistic that when his time does come that he’s able to come off the list and he’ll be ready and doing everything that he possibly could have done to put himself in a position to go compete and get some playing time.”

The Bengals have embraced this on the backend of the roster. This is most notably evident with Dax Hill. He is a rookie that will have a prominent, if not leading, role on the defense. Throw in Zach Carter, Jeff Gunter, Tycen Anderson and Allan George on defense and presumptive starting left guard Cordell Volson on the offensive line, and you get the point. The interesting part is how key the veterans, like Jessie Bates, Joe Mixon and Tyler Boyd, are in bringing the young bucks along.

“It’s critical. And I think the veterans that know the things that we wanna get accomplished, they know how crucial these young guys are going to be to that,” Taylor said. “It doesn’t necessarily mean they’re taking your job. But they might need to take some snaps of you and play a role to help you. I think that’s true to every position that we have right now going.

“I think to get more specific, I think that d-line room does a really good job of bringing those guys along. Zach Carter and Jeff Gunter, just as you watch those interactions, and what they’re learning from those guys, I think that’s a really good example of those veteran d-linemen knowing how critical these guys are going to be to our depth because you’re going to need it at some point. That really, you can speak about the entirety of our team that way. Really proud of the way that the guys have taken those guys under their arms.”

There were certainly eyebrows raised when two talented rookies (Kendric Pryor and Kwamie Lassiter II) and two experienced players (Mike Thomas and Trenton Irwin) were cut from this group. Pryor and Lassiter are certainly candidates to return on the practice squad which is why it’s premature to lose your mind over cuts. The Bengals certainly would like to keep a player like Pryor but when you keep a rookie free agent, it’s usually out of serious depth need. The Bengals feel like Trent Taylor and Stanley Morgan is enough. And while Thomas is the most surprising of the group, as one of three vested veterans cut along with edge Noah Spence and safety Trayvon Henderson, he could re-sign immediately. Thomas doesn’t need to clear waivers. He’s a free agent and can re-sign anywhere, including with the Bengals, which is the hope of Zac Taylor and personnel chief Duke Tobin.

“I think anytime where in the past we’ve kept anywhere from 5-7 receivers there’s a lot of positions like that where guys are trying to do the number count and predict how many we’ll keep so it’s never fun breaking that news, but those guys have certainly had strong camps for us,” Taylor said. “They do what we ask them to do. I think Troy (Walters) does a really good job managing that group and helping all those guys get better and they understand that. Certainly, if the practice squad works out for those guys, we’ll willingly continue to work with them.”