Most talented roster in Bengals history ready to make history of their own. 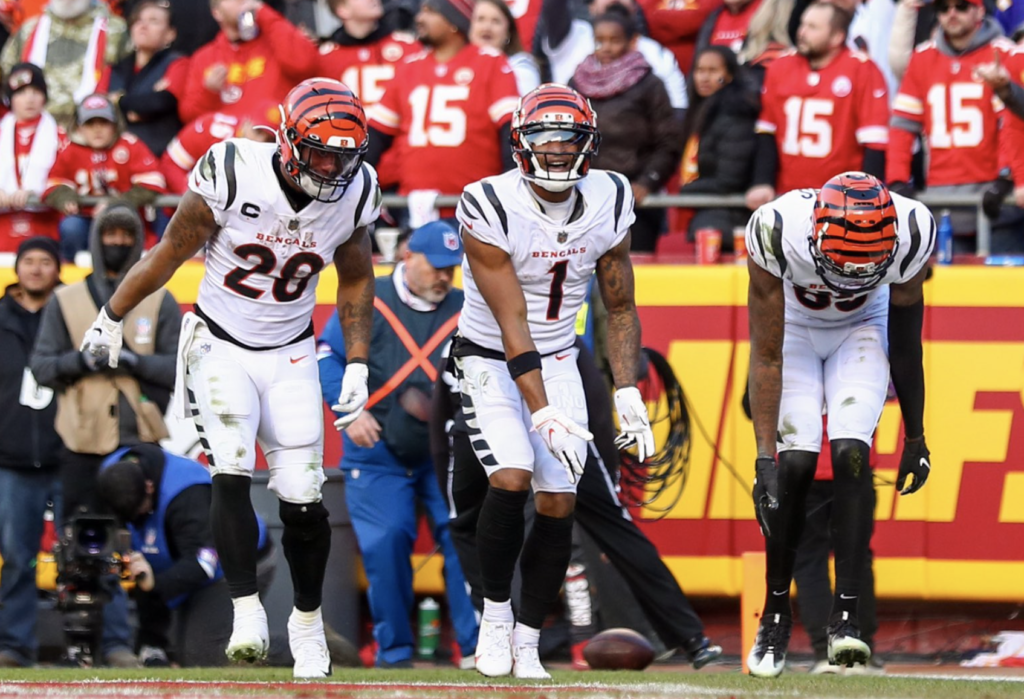 CINCINNATI — As much as last season ended on a high note and nearly culminated with the first Super Bowl championship in franchise history, there was a lot the Bengals left on the table during the season.

This year, the Bengals will be finishing all the scraps.

There was the no-show for three quarters against the hapless Bears before the offense woke up. But it was not enough as a rally was thwarted by a Tee Higgins fumble in a 20-17 loss in Chicago.

There was the near-miss against the Packers as the Bengals rallied frantically in the final minutes to tie the game, only to have an Evan McPherson field goal attempt fly off the right upright with 21 seconds left. Then in overtime, McPherson had another chance and he thought he had that one nailed, only to have it sail wide over the left upright in a 25-22 loss.

There was the 11-point blown lead against Mike White and the feeble New York Jets at MetLife Stadium in October. Bengals lose, 34-31.

Who can forget the comeback from 20-6 down in the fourth quarter against the 49ers on Dec. 12 at Paul Brown Stadium? The Bengals not only tied the game, they forced overtime and had a 23-20 lead but left points on the table when they chose not to aggressively pursue a first down on the way to a potential game-winning touchdown. Instead, they trusted their defense against Jimmy Garoppolo. Bad move. The Bengals couldn’t hold George Kittle and Brandon Aiyuk in check. They lost, 26-23.

They suffered a blowout at home to Cleveland. They fought back against the Chargers only to have a Joe Mixon fumble alter the comeback bid. The seventh loss of the season was in Cleveland on Week 18 when they had the AFC North clinched.

The Bengals flip two of those four and they wind up 12-5 and with the No. 1 seed. The Bengals roster is better and deeper this year. Here’s thinking they do.

Sure, it’s fool’s errand to do this but that’s what we do when we’re trying to predict the unknown in the NFL.

Nothing is every guaranteed in the NFL, especially Week 1. But a Steelers team starting Mitch Trubisky at quarterback in the first game without Ben Roethlisberger should not scare a defense that is getting Jessie Bates back in time for the season opener. George Pickens will get some yards and a possible score and tight end Pat Friermuth is good for a score. That should be it.

The La’el Collins-Chido Awuzie revenge game. Cowboys offensive line is hurting – literally – after the loss of Tyron Smith spurred Dallas to sign 40-year-old Jason Peters to the practice squad this week. Bengals have more weapons than Dallas. This is an early road test for the Bengals to show they can handle having a bullseye on their back. Dak Prescott acknowledged what playing the Bengals means.

This is really what the final should’ve been last season. Rookie first-round corner Sauce Gardner against Ja’Marr Chase should be popcorn-eating worthy. The rookie up against one of the premier athletic receivers in football. If Chase can handle Jalen Ramsey, what could he do against Gardner. As we saw at UC, Gardner is fearless and confident. And extremely long. Chase goes for 10 catches and 95 yards and 2 TDs.

Tyreek Hill had some big numbers against the Eagles in the preseason finale as the Dolphins obliterated the Eagles in South Florida. His speed is still world class as Lou Anarumo pointed out before the Week 17 win at PBS and the AFC Championship. Now in aqua blue, Hill still strikes fear in the hearts of defenses. But if there’s one team that can handle speed and not lose their composure, it’s the Bengals.

This would seem to be the first hiccup as the Bengals meet a team that is desperate to put behind them the memory of not one but two ugly, ugly blowout losses in 2021, including the 525-yard performance by Joe Burrow in the Week 16 boat race in Cincinnati. That game essentially ushered out the Wink Martindale era in Baltimore. Burrow and Martindale, the Giants new defensive coordinator, chatted before the Bengals-Giants preseason game at MetLife. This game is also on Sunday night football. There’s a ton on the line for the Ravens in this game.

This likely won’t be the 51-point shellacking the Saints laid on the Bengals at Paul Brown Stadium in Marvin Lewis’ final year in 2018. But Joe Burrow and Ja’Marr Chase surely will be out to remind the LSU fans how great a run it was in 2019.

This needs to be a business-like take down of an inferior team. Sure the Desmond Ridder story is a nice one. Who knows? Maybe he gets a chance to start for a rebuilding Falcons team by then. Or maybe it’s still Marcus Mariota. Either way, this needs to be a no-doubter.

Remember the Thursday night blowout 30-13 win in Cleveland in 1986? For the first time since Boomer and Bernie ruled the division, the Bengals and Browns might be the two best rosters in the division. Will the Browns be done in by their terrible karma surrounding a mind-numbing decision to guarantee $230 million to Deshaun Watson, a quarterback with enough baggage to keep a 747 grounded? He won’t be playing in this game as Watson was suspended 11 games to start the season. Don’t let Nick Chubb emasculate your defense and this should be a Halloween win for the Stripes.

Again, an inferior team at home. This is a team the Bengals should handle. Yes, the sight of Baker Mayfield could cause some stomach turning but still, the Bengals should have matured by now and be able to cover the group of Panthers receivers – led by DJ Moore and Robbie Anderson – who are not quite the set Mayfield was throwing to in Cleveland.

By this time, rookie Kenny Pickett has been handed the reins of the Steelers offense. It shouldn’t matter as the Bengals capture their second straight series sweep.

Titans play keep away from Bengals offense with Derrick Henry exacting a measure of revenge for the AFC Divisional upset in Nashville last January. While the Steelers did make the 2021 playoffs, this begins the mettle of the Bengals schedule to end the season, where they play six playoff teams from 2021 in their final eight games.

Bengals find a way against Patrick Mahomes for a third straight time, only in this game they won’t have to fight back from a 14-point hole three times or a 21-3 deficit. The Bengals, in their first game of December, need to find a way to run the ball behind the line they paid for in the offseason. First team to score a defensive TD wins the game. Here’s thinking it’ll be the Bengals.

Bengals see Deshaun Watson for the first time and they’re ready for him, showing him different fronts and pressures all game long. Bengals get another defensive touchdown and hang on for their 11th win of 2021.

In a Super Bowl preview, Tom Brady gets his offense going in the second half and Bucs need this game at home badly as they battle with Green Bay and the Rams for home field advantage. Brady admires the way Joe Burrow has handled the national media attention, reminding him of what he was like in his young days in New England. Trailing 24-20, Brady drives 65 yards and hits Mike Evans with 10 seconds left for the game-winner in one of the most exciting games of the year in the NFL. This will be the game that motivates Burrow into the postseason. Alex Cappa returns to Tampa for the first time since signing his deal with the Bengals.

In a rock fight against the Patriots defense led by Christian Barmore, the Bengals exercise some patience early by running the ball 25 times in the first half on Christmas Eve at Gillette Stadium. Bengals close out the Patriots in Foxboro for the first time since James Brooks ran wild at Foxboro Stadium in 1986 in a 31-7 Bengals win. This is Ted Karras’ revenge game.

Trey Hendrickson sacks Josh Allen in the end zone late to seal a dramatic Monday night win that gives the Bengals home field advantage throughout the playoffs. Chris Evans comes out of nowhere to catch a wheel pass for a touchdown. Von Miller does record a sack of his own in the losing effort. For the second straight year, Evan McPherson drills a field goal at the gun for a critical Week 17 win.

For the second straight year, the Bengals sit their starters and the Ravens are playing to save the job of their head coach John Harbaugh. Trayveon Williams runs wild for 122 yards on 21 carries and two touchdowns and Brandon Allen directs a touchdown drive late in the third quarter as the deepest Bengals roster in history posts its best record.

Sure, 14-3 is a lofty record given the stiff competition within the AFC and how many teams improved. But this Bengals team is special, at least on paper. With Burrow back healthy and Jessie Bates back, the “sky is the limit” as Burrow said last week.

A great regular season isn’t the end goal, of course, but another division title and a first-round bye should be. Also, the Bengals have never won consecutive division titles, another streak that should end this season.