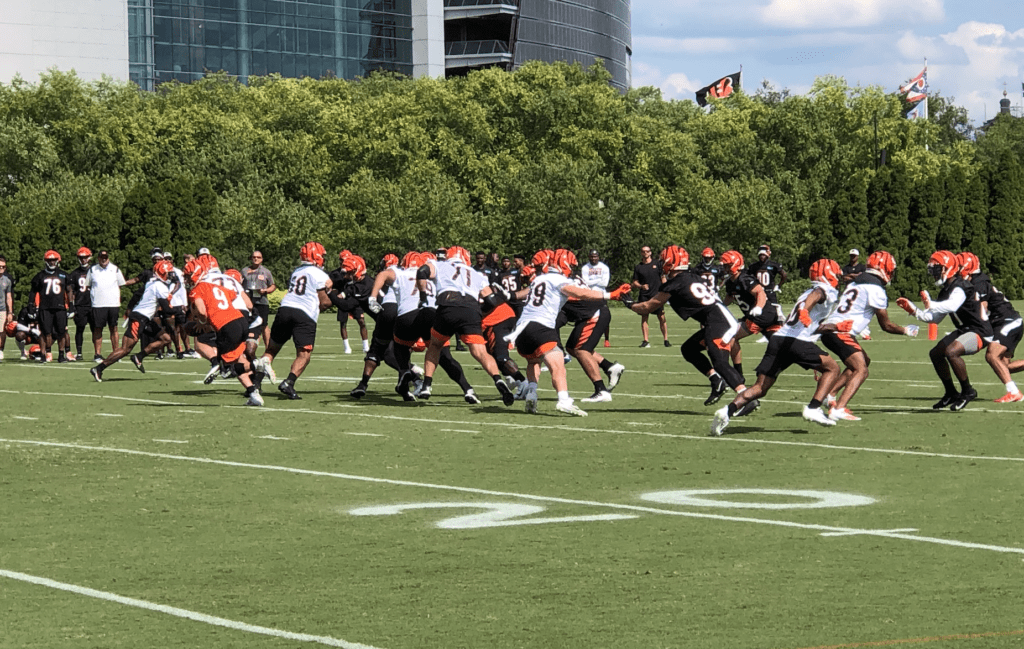 The Bengals couldn’t ask for a better preseason test right out of the gate than a matchup against the team that won it all in February, and is the odds-on favorite to defend their crown in Los Angeles in Feb. 2022.

The caveat, of course, is that most Bengals starters don’t figure to see much of the field for too long.

The Tampa Bay Buccaneers are the first team in the salary cap era to return all 22 starters from a Super Bowl win. The last team to pull off the feat were the 1977 Oakland Raiders that captured Super Bowl XI. That team lost in the AFC Championship to the Orange Crush Broncos.

Tampa Bay coach Bruce Arians confirmed this week that 44-year-old Tom Brady and most of the starters will play Saturday. This is of particular note since Brady is coming off offseason surgery himself, having his MCL repaired after playing the 2020 season with the injury.

Arians also announced that Brady should be joined by most of his starting unit, which also includes tight ends Rob Gronkowski and O.J. Howard and his stellar receiving corps of Chris Godwin and Mike Evans. Brady’s running back is Ronald Jones II.

The Bengals and Zac Taylor last faced Brady in Week 15 of the 2019 season when the Bengals hung tough in the first half against the Patriots. But two poor decisions by Andy Dalton were picked off by Stephon Gilmore and the Patriots pulled away, 34-13.

This figures to be a great test – at least for a series or two – for a Bengals defense that believes it is much, much faster on the edges and can apply coverage in the secondary much tighter. If the Bengals can show some resistance to Brady and the Tampa offense on the first drive, perhaps Arians will decide to leave Brady on the field for one or two additional drives so both the Tampa offense and Bengals defense can get some more reps against each other.

W2LF when Bengals are on defense:

One reason the Bucs caught fire in the postseason last year was their offensive line gave Brady enough time to pick and choose and kept him upright. That will be of utmost importance in the preseason opener to ensure that Brady doesn’t take any unwarranted hits coming off MCL surgery. Bengals DLine has been one of the more encouraging developments in camp, especially with the return of NT Larry Ogunjobi. Throw him in with DJ Reader and you have the start of something really big. How will Lou Anarumo rotate in Mike Daniels, Josh Tupou and the massive Tyler Shelvin? The tackle spot is one of the deepest on the roster.

Anarumo has some options in the secondary that he hasn’t had in the past. With the likes of Mike Hilton, Chido Awuzie and Trae Waynes to go with safeties Jesse Bates III and Vonn Bell, the Bengals figure to be in a nickel look most of the time. Will we see Hilton or Waynes come off the corner and blitz? Probably not but worth watching how they line up. Anarumo emphasized this week that he won’t be calling any fancy schemes, just line ’em up and let them get their game legs under them, which is a sound approach. What we should really look for in this game is how well the Bengals tackle, especially in space. That was a killer the first two years of the Zac Taylor issue and needs to improve drastically.

"Make sure y'all get that on camera."

Akeem Davis-Gaither, Germaine Pratt and Logan Wilson are the top three linebackers in this unit. They all figure to have spots, barring some unforeseen developments. This is the time for Markus Bailey, Jordan Evans, Joe Bachie and Keandre Jones to shine.

W2LF when Bengals are on offense:

This is the group, more than any other, that Bengals fans rightly have the most doubt and concern about heading into 2021. One big reason Burrow isn’t playing right out of the gate is the uncertainty of the offensive line and who plays where. The tackles seem to be set with Riley Reiff (RT) and Jonah Williams (LT). But it’s the interior that needs drastic improvement and it’s been a revolving door in camp, as the Bengals search for the right blend that will stick and keep Joe Burrow upright on a consistent basis. Assuming Trey Hopkins, like his quarterback, is fully recovered from his own ACL reconstruction, he’s the starting center. The powerful Quinton Spain (6-4, 330) and Xavier Su’a Filo are holdovers from 2020 and could be the bookend guards. Guard Michael Jordan and center Billy Price have the most to prove in the preseason. Watch them very closely Saturday. Also, watch rookie guard D’Ante Smith, who has had some very good moments in camp.

The running back has shown encouraging burst and no rust from last year’s foot injury that caused him to miss the last 10 games of 2020. He has clearly been the strongest looking weapon the Bengals have when they have the ball. He may only get 5-6 carries in one or two series but to seem him burst and run like the Joe Mixon of 2018 would do wonders for an offense that has struggled to find any sort of rhythm in camp until lately. Will we see samples of Mixon running offensive line coach Frank Pollack’s vaunted wide zone Saturday and getting the ball in space in the pass game?

With Joe Burrow ruled out, this is a chance for Allen to cement his role as Burrow’s backup, something he’s shown quite ready to assume both by his play in camp so far and his performance against the Texans last December. Allen has shown that the Bengals were right to hold onto him and not go out in the free agent market to get a backup for Burrow, should something happen. Allen is someone in house with a great systemic knowledge of the offense and that should be on display Saturday, assuming he gets the start and plays at least a half, though Zac Taylor has hinted that he likes to give his backups a full run through of the game to simulate a regular season contest.

Three receivers to watch for different reasons. Tate has been opening a lot of eyes with his work on sideline patterns, his ability to high-point catches and compete for the ball. At 6-5, Tate is not only a great target, he’s added hands and competitiveness to go with it. Chase has been your typical rookie first-rounder in camp. He’s shown glimpses of his ability to separate at the top of routes but not off the break. That’s got to improve and given his exceptional ability and the chance to work with Burrow again, likely will. He’s also had some ball security moments in practice. Again, that improves with technique and drills and nothing to panic about.

5. Spinning around and catching balls off a JUGS machine at close range is not as easy as Ja’Marr Chase makes it look pic.twitter.com/dXzzZOl834

He’s also shown the flare to make catches over the middle, showing great late hands that don’t tip the defender. With Taylor, he’s got the makings of a Julian Edelman in stripes. Speed, burst and intermediate route skills that could make him an invaluable depth option and an ideal candidate in the punt return game.

Kevin Huber is on hand to get his reps. Fifth-rounder Evan McPherson has shown the slightest of edges in the kicking game in camp over Austin Siebert. The two figure to get equal looks on PATs and FGs. Will Pooka Williams get a chance to show flare as a returner?