Players and coaches like what they see of each other in the very early stages of offseason practice. 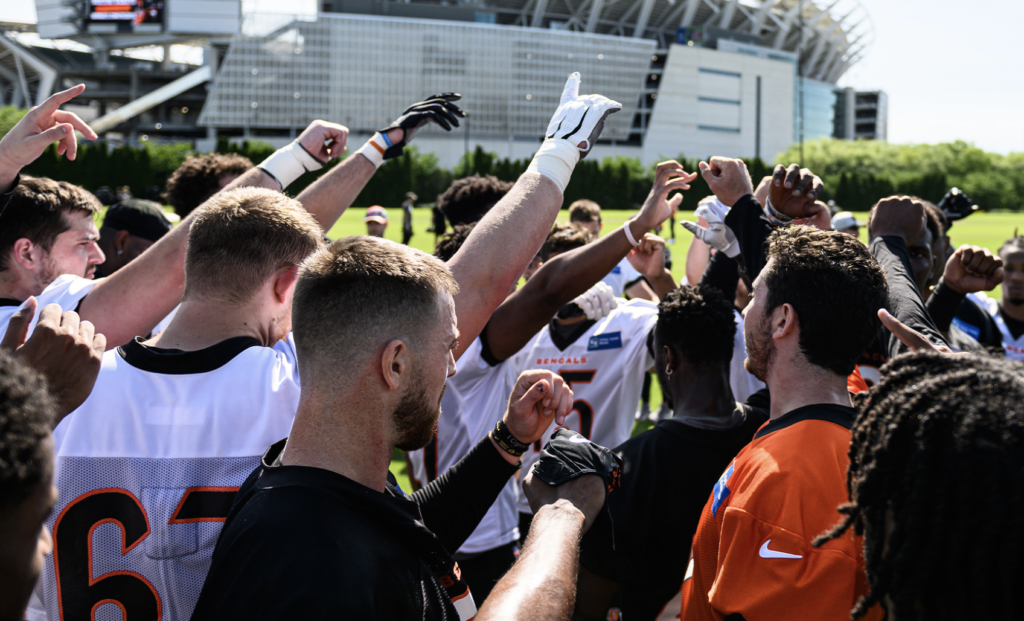 CINCINNATI – Chemistry is a funny thing in pro sports. Great teams talk about it as a key factor in the winning formula.

For mediocre and bad teams, chemistry is either all they have or not in the mix at all.

Springtime in the NFL is the perfect time to start mixing those ingredients together so that when training camp rolls around in late July, the recipe for success is ready to cook.

This week, as the Bengals began their offseason practices for the first time since Super Bowl LVI, those ingredients were all on the field together and there were good vibes all around.

“It’s big for us. We’re a young team. This playoff run was good for our experience and confidence,” Mike Hilton said. “Guys came in ready in the middle of May and are excited for the season to roll around.”

These Bengals believe they have right blend thanks to a busy offseason by their front office along the offensive line, a draft that has restocked the defensive secondary and additional signings like Hayden Hurst that replace the departed C.J. Uzomah, who by the way, was Mr. Personality on the 2021 Bengals.

“It’s a small thing but probably one of the more important things of the play,” Karras said. “It’s been good so far and smooth with Joe. We’re going to keep working every day. We want it to be a smooth operation. My job is to make him feel comfortable and we’re going to set out to do that.

“He’s a great leader, fun to be around, enjoys coming in, brings a lot of energy. You can always tell who’s bringing some energy. It’s easy to have energy Day 1 of practice (on Monday). You go to Day 2; it was still the same so excited to see what it looks like (going forward).”

La’el Collins was brought in to anchor the right side of the offensive line. He knows chemistry is important but hard work and dedication to the craft is an even bigger priority.

“We know we have the tools and the potential to do it but potential without hard work means nothing,” Collins said. “So, we gotta continue to put the work in each and every day. Obviously, there was a great season last year, but our eyes are pointed forward and we’ve got a lot of work to do to get to where we want to go.”

But don’t take it from Karras and Collins, go to the leader of leaders on the Bengals.

Burrow had the crackers and snacks out at his home in March to bring Collins, among others, to town.

“That’s something I want to do every year,” Burrow said. “I want to make sure the guys we are looking to bring in feel at home in Cincinnati and with the team because that is the culture we are building in the locker room. We are really, really close as a team, coaching staff, players, strength staff, trainers. I just want to portray that to the guys that are thinking about coming here and that we want to sign.”

Once the new faces acclimate to each other on the field, that’s when the chemistry turns to comfort. And once comfortable with each other, teammates always perform at a higher level because there’s an unwritten communication and expectation.

“Just a lot of new faces. That’s a very eager group, especially the new guys that here, free agents, draft picks,” head coach Zac Taylor noted this week. “It’s been a fun group to be around. They love ball.

“We talk about wanting guys who love ball. That’s a group that to a man loves ball and they’re soaking up everything Frank (Pollack) has to say, so it’s been fun to observe them down there in the drills, watch them in the meeting rooms. We’re really happy with the character of the group.”

This is an exciting time for Taylor. The coach is getting his first look at a group that has Super Bowl expectations, and it’s his job as top chemist, to make sure the ingredients are mixing properly, even several months away from the Sept. 11 opener against the Steelers at Paul Brown Stadium.

“You know it’s fun,” Taylor said. “It’s just good to get all the pieces back in here. We like being around each other, so I enjoy that part of it, the offseason process, just putting last year behind us. New group, new team, we just have to start from the beginning, start from scratch. So that’s our overall general message.

“I wouldn’t say we brought it on slowly. There’s a lot of information that was thrown out on the first two days. Part of it is, we want them to hear through this offseason process so it’s not foreign to them when they come back to training camp. You’re not going to get a ton of reps on stuff you’re installing. It’s a lot of classroom work. These guys are going to have to take it into their own hands, study, understand it, watch old film, watch old practice clips, and then be ready for training camp.”

The Bengals Thursday announced the signing of fifth-round pick Tycen Anderson out of Toledo. The safety joins fellow defensive back Dax Hill as the first two picks to sign. The other four picks remain unsigned, including Cam Taylor-Britt, Cordell Volson, Zach Carter and Jeffrey Gunter. Meanwhile, the team’s roster stands at 88 with 17 undrafted college free agents, six draft picks and 65 veterans on the roster.

Players are understandably excited for the increased exposure of five prime-time games in 2022. The Bengals host Miami on Thursday night, Sept. 29 at PBS. That’s followed up in 10 days with a Sunday night game in Baltimore. On Halloween, the Bengals play in Cleveland on a Monday night. Their third AFC North road primetime game comes on Sunday, Nov. 20 at Pittsburgh. Their final scheduled primetime game is in Week 17 against the Bills at Paul Brown Stadium, the final Monday night game of the 2022 regular season.

“We’re definitely going to have more respect than we did last year,” Ja’Marr Chase said. “Last year, we didn’t really care about what people were saying because we know we were at the bottom. Now, we have to have the mentality that we’re in the middle (to) the top, we have to keep that mentality to keep moving on.”

Added Mike Hilton, “Whoever we play on Sunday, Monday or Thursday, we’ll be ready.”

Count Ja’Marr Chase as someone excited to see what the new offensive line can do in terms of providing Joe Burrow more time to pass. It was Chase who broke wide open from Jalen Ramsey in the Super Bowl and had a chance at the game-winning touchdown if only Burrow wasn’t rushed and hit by Aaron Donald on fourth down.

“I feel like we have a good group of guys around us and now that we have a new O-line, I feel like those guys are going to lead a little longer, their game is more developed,” Chase said. “They know how to act and then you’ve got Joe being himself and then all the young guys coming in. They’re watching the old guys lead by example. I think that’s something big. That’s something Iike to do is lead by example, not talk and lead.

“Now, we just have the expectation that we’re one of the best (offenses) in the league. We want to keep that expectation rolling.”

Chase is also someone who has never backed down from high expectations. He and Burrow met those expectations in 2019 on their way to an undefeated national championship with LSU. Chase is embracing that again in 2022.

“That’s not something we think about,” Chase said of the target squarely on the backs of the Stripes. “We go out every game trying to win. Every game is a tough game in the NFL. We’re not worried about the ‘X’ on our back. Everybody’s got an ‘X’ on their back.

“I feel confident about how far we went last year. That’s all the confidence we need right now.”

One of the things the Bengals new right tackle has noticed about his quarterback is how he reads the field, if given time to read it and of course, pass.

“Just the way he sees the game,” Collins said. “When you’re able to see that out of a young player, you know there’s a special (ability).”

Frank Pollack was Collins’ first offensive line coach in Dallas when Collins broke into the NFL as a rookie in 2015.

“It’s pretty much the same,” Collins noted. “There’s some new techniques that’s he’s instilled since I’ve been away from him. But it’s still the same things as far as the way we approach it and the way we get into certain blocks. We’ve got a great group of guys, guys that love to come to work and we’re just going to continue to build our chemistry and get strong, each and every day.

“Everything starts with technique. We’re really focused on that and that’s what’s really great.”

In your weekly “We’ve got your back, Jessie” update, Mike Hilton, who keeps in regular contact with the star safety, offered yet more encouragement for Bates.

“Everybody in here wants Jessie back, and for the long term,” Hilton said. “We’re going to put our trust in the front office to get this done because everybody knows how much Jessie means to this team, to the defense. He’s the guy we look forward to coming back soon.”

Asked Mike Hilton about Jessie Bates. Hilton still has faith Bates will play this season after "business" drama is over. #Bengals pic.twitter.com/JRaTiCnFjA

Some eyebrows were raised this week when No. 58 Joseph Ossai was not on the practice field but rather working on the side on the rehab field with team rehab specialist Nick Cosgray. The second-year edge rusher had additional cleanup performed on his surgically repaired knee, injured in the preseason opener last August at Tampa Bay.

“Yeah, a couple more weeks,” Taylor said. “He had another procedure done to help the process and we’re going to, it’s going to a take a couple more weeks, but he’s certainly on track to be able to play in training camp and do some good things for us.”