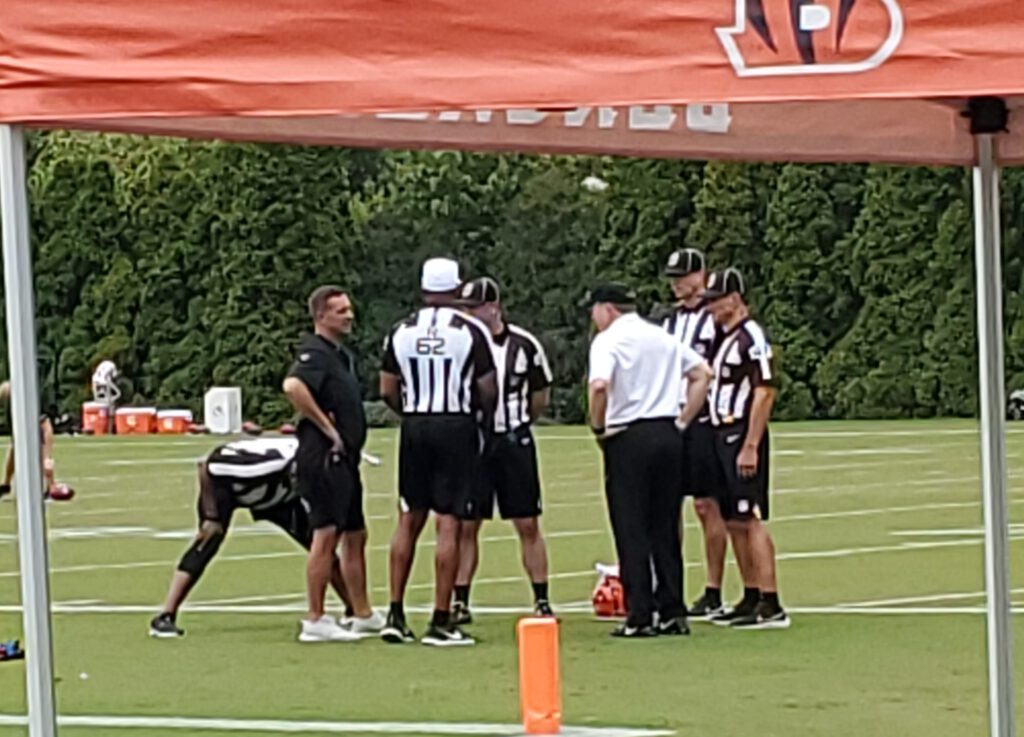 CINCINNATI – Weather could impact training camp practice for the Bengals Friday as severe thunderstorms are forecast to pop up during the day.

It was certainly a stormy day for offensive line coach Frank Pollack and the offense on Thursday.

Brandon Allen had difficulty getting the offense into any sort of rhythm. The offensive line first team featured D’Ante Smith at right tackle, Alex Cappa at right guard, Ted Karras at center, Jackson Carman at left guard and Jonah Williams at left tackle, with Hakeem Adeniji filling in for Cappa at times. La’el Collins remains on the sideline in sweats as an observer.

The defense, on the other hand, led by edge rushers Trey Hendrickson and Sam Hubbard, appeared in midseason form. Hendrickson was fired up and demonstrative, celebrating his success and the success of the defense on several occasions.

Both Hendrickson and Hubbard up the field against the offensive line and into quarterback Brandon Allen’s face for whistled sacks.

“It’s training camp. He’s getting ready to play,” Bengals defensive coordinator Lou Anarumo said. And generally during the season it’s against the scout team and it’s a little more scaled down. We’re working good on good, and he’s gonna work like it’s the game. That’s his job. As I said, he’s an elite edge rusher in our league, and we’re happy he’s ours.”

One example of the great day Bengals D front had against Brandon Allen pic.twitter.com/dYBJ8AjYlQ

DJ Reader and BJ Hill also looked dominant in several reps. Joseph Ossai also looked impressive in his reps with the second team and occasional looks with the first.

“We’re treating him as a rookie,” Anarumo said.

The communication was strong in the secondary, with calls being yelled out that were easily heard from the sidelines and defensive backs in tight coverage.

Speaking of Super Bowl LVI and THAT call, Logan Wilson was back on the field Thursday in full pads, participating in 7-on-7 drills and moving around well after fully healing his shoulder that was repaired in the offseason.

He said he is over the holding call against him while covering Cooper Kupp on LA’s game-winning drive.

Other takeaways from Thursday:

The biggest injury note of camp so far occurred Thursday when tight end Drew Sample left midway through on a cart, after having his left knee closely examined. He was spotted trying to stand up and move on it slightly but had to sit back down.

Bengals defensive coordinator Lou Anarumo had a discussion that lasted several minutes with Super Bowl LVI referee Ron Torbert. Anarumo said he did not discuss the Logan Wilson holding on Cupp but rather the points of emphasis this season and what officials have been told to closely monitor and flag this season so that he can pass it along to other coaches and players in coaching techniques.

“I’ll just say this, it was nothing about last year,” Anarumo said. “It was just really asking more about what is the emphasis of the year, because there’s always an emphasis from the NFL on what penalties they’re looking at specifically. So, I just wanted to hear from him and how he saw it so I could relay it to the players.”

Willie Anderson was on hand speaking to the team and taking in practice. The most dominant right tackle in team history chatted up owner Mike Brown before practice.

For all the struggles of the offense, Evan McPherson was … Evan McPherson again on Thursday, drilling all six field goal attempts, including four of 50-plus yards.

After staying away on Tuesday, Joe Burrow returned to practice on Thursday on a cart, taking in the full two-hour session. At one point, Burrow did get up and stand and watch 11-on-11s before heading back to the cart. He gave his starting center Ted Karras a lift from practice.

Practice ended with the defense beating the offense in the red zone drills, holding the starting unit out of the end zone. The result? The offense ran four gasser sprints while the defense ran only two.

The team will hope to beat the storms Friday and get one more full pads practice in before the players enjoy a day off on Saturday.