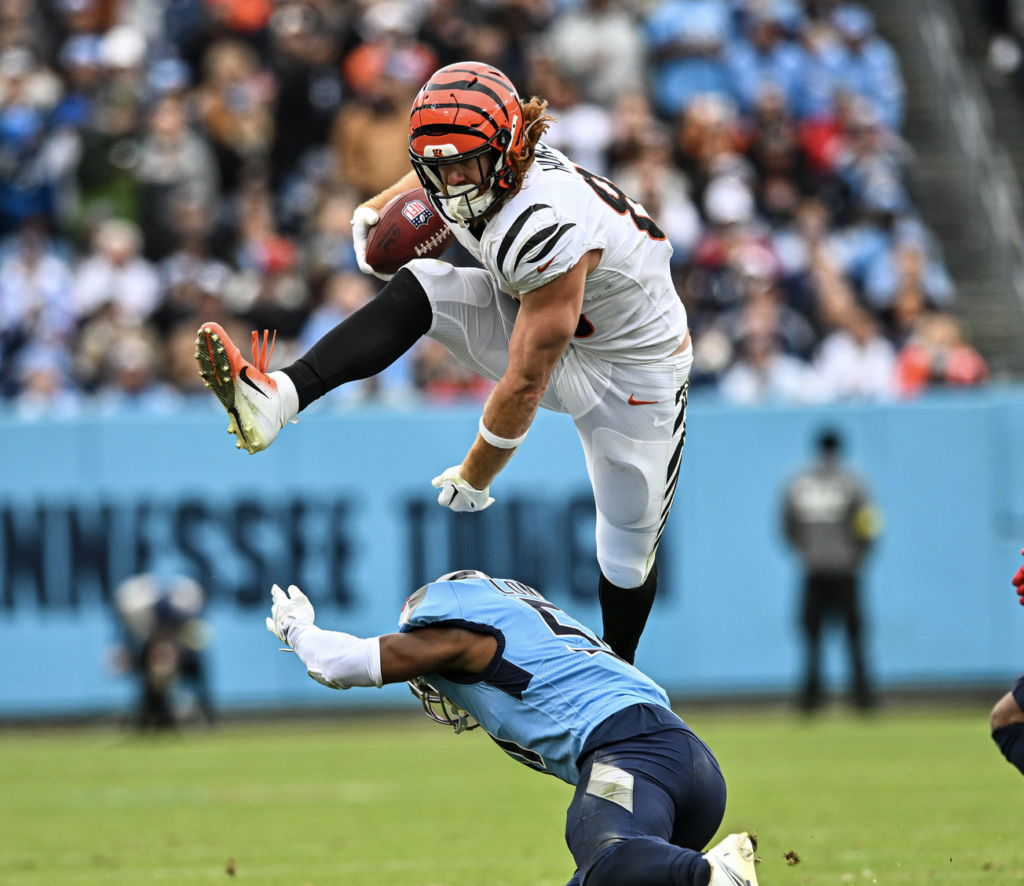 NASHVILLE — The grind was kind to the Bengals on Sunday in Music City.

Joe Burrow connected with Tee Higgins on a 27-yard touchdown pass early in the fourth quarter and the Bengals held Derrick Henry in check to post a critical 20-16 win over the Tennessee Titans Sunday before 69,441 at Nissan Stadium.

As a result, the Bengals have their first three-game winning streak of the season and stand 7-4. For three quarters, it was a rock fight.

Higgins finished with seven catches for 114 yards and a touchdown. But it was key plays by Trayveon Willams, Trenton Irwin and Samaje Perine on offense and a defense that held Derrick Henry in check all game. Henry managed just 38 yards on 17 carries.

The Bengals had early momentum, driving down the field on the game’s opening drive and appeared to have a first down at the Tennessee 22 on a Burrow-to-Tee Higgins 22-yard slant completion. But Chris Evans was called for a pick and offensive pass interference that wiped out the gain.

The Bengals were pushed back to their 44 and had to punt. From that point, the Bengals lost the field position battle and allowed the Titans to start at their 40 and 46 on consecutive drives.

The Bengals special teams committed penalties on three first half Tennessee punts, pinning the Bengals offense inside its 10 twice.

The Titans finally capitalized with a drive to the Bengals 15. The Titans settled for a 33-yard Caleb Shudak and a 3-0 lead. DJ Reader had a productive and disruptive first half, batting down a pair of Ryan Tannehill passes.

But on the next drive, Henry, who had just 13 yards rushing on seven first-half carries, thanks to a strong effort by the Bengals defense lost containment. Henry caught a screen pass at the Tennessee 35 and rambled 69 yards to the Bengals six, where Cam Taylor-Britt forced the fumble. But Treylon Burks pounced on the ball before Jessie Bates could get to it for his first career touchdown and a 10-3 Titans lead.

The Bengals answered with their only touchdown drive of the first half when they marched 92 yards in nine plays. Trayveon Williams had a key 24-yard outstretched grab of a Burrow pass down to the Tennessee 7. On the next play, Perine ran off the right side for a seven-yard touchdown to tie the game, 10-10.

The Titans nearly took the lead into halftime as they drove down to the Cincinnati 15. But Shudak missed a 35-yard field goal wide left.

The Bengals forced a three-and-out to start the second half, highlighted by a Sam Hubbard sack of Tannehill.

The Bengals took advantage of good field position but could not capitalize with a touchdown, settling instead for a 38-yard Evan McPherson field goal and their first lead, 13-10.

The Titans answered when Tannehill hit Burks for a 51-yard bomb on a post pattern down the middle of the field, beating Taylor-Britt to the Cincinnati 12. But the Bengals defense held and Tennessee settled for a 24-yard Shudak field goal that tied the game, 13-13.

The Bengals came back with their second touchdown drive, highlighted by a sensational catch by Trenton Irwin on third down that extended the drive. Irwin caught the ball and got both knees down on a third-and-12 at the Tennessee 43 for a 16-yard gain. Burrow then connected with Tee Higgins on a jump ball down the right sideline for a 27-yard touchdown and a 20-13 Cincinnati lead.