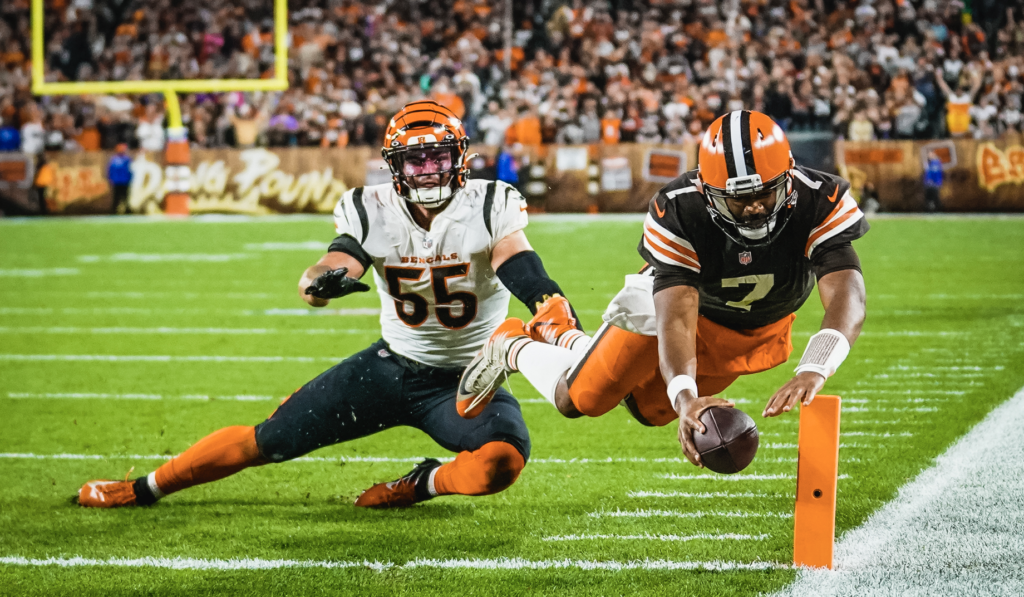 CLEVELAND — The Browns made like Michael Myers and carved up the Bengals in a brutal Halloween slaughter on Lake Erie.

Nick Chubb ran for 101 yards on 23 carries and two touchdowns while Browns quarterback Jacoby Brissett dissected the Bengals defense for 278 yards on 17-of-22 passing as the Browns embarrassed the Bengals, 32-13, before an energized FirstEnergy Stadium crowd Monday night.

The Bengals were embarrassed in every possible way. Adding injury to the Halloween insult, the Bengals lost cornerback Chido Awuzie to a right knee injury and corner Tre Flowers to a hamstring injury. The loss of Awuzie appeared far more serious as he was carted to the locker room in the second quarter.

The NFL trade deadline is Tuesday at 4 p.m. ET.

In the first game without Ja’Marr Chase, they looked utterly unprepared and didn’t score until Joe Burrow threw a meaningless 13-yard score to Tyler Boyd when they were already down 25-0 late in the third quarter.

Burrow added a 41-yard touchdown to Tee Higgins in the fourth quarter and finished with 232 yards on 25-of-35 passing and two touchdowns. He also threw an interception.

The Browns won the toss and deferred and the Bengals appeared ready to capitalize like they did in Atlanta, marching down the field with a pair of third down conversions, one to Chris Evans down the right sideline for a first down.

After a first down toss to Tyler Boyd, the Bengals appeared in business at the Cleveland 27. But it was all downhill from there. Burrow’s pass to the left was tipped by Myles Garrett and intercepted by AJ Green at the Browns 16.

The Browns marched the ball down to the Cincinnati 35 but BJ Hill blocked Cade York’s 53-yard field goal and the game remained scoreless.

The Bengals offense was wholly incapable and ineffective the rest of the half.

The only touchdown came after the Browns converted on a 78-yard, 10-play drive, highlighted by a controversial no-call when it appeared Vonn Bell – on a safety blitz – was clearly held by Kareem Hunt on third down.

The resulting 29-yard pass over the middle to Amari Cooper on third-and-5 from the Cleveland 27 put the Browns at the Bengals 44. Seven plays later, Nick Chubb took a direct snap in the Wildcat and ran it in from the Cincinnati 4. On the extra point, the Bengals had 12 men. The Browns decided to go for two points and Chubb easily scored for an 8-0 lead two minutes into the second quarter.

Worse than that, the injury bug hit the Bengals in a nasty place as they lost their top corner Chido Awuzie to a right knee injury on Cleveland’s next to last drive of the first half as he collided with Amari Cooper at the Cincinnati 25. He immediately grabbed his right leg and stretched it out on the sideline and was replaced by Tre Flowers.

After getting checked out in the tent, he was carted off the field and ruled out with a right knee injury.

The defense kept the Bengals in the game when they got to Jacoby Brissett one play after the Awuzie injury. He fumbled on pressure and Akeem Davis-Gaither gathered in the ball and the Bengals were at midfield.

The Bengals advanced 15 yards but Evan McPherson pushed the 47-yard field goal wide right. The Browns capitalized with a quick 26-yard drive that ended in a Cade York 55-yard field goal at the gun and an 11-0 halftime lead.

The Browns put the game away with two third quarter touchdown drives, one of 75 yards to open the second half and the second on a Brissett to Amari Cooper 4-yard pass to the far corner with three minutes left in the third quarter.