Bengals will face Chiefs at Arrowhead next Sunday in AFC Championship rematch. 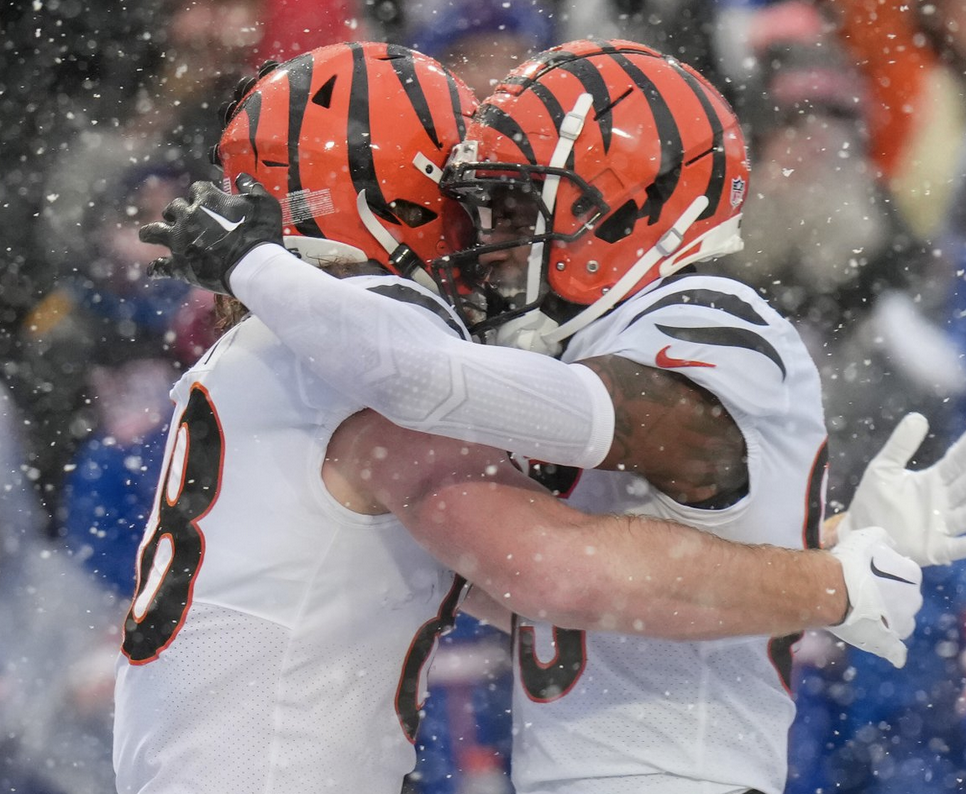 ORCHARD PARK, N.Y. — The Bengals played their most complete game of the season when it mattered most.

Joe Burrow was perfect at the start, Joe Mixon was a hammer on the ground and in the pass game, the offensive line was nearly perfect and the defense held the Bills to just seven first half points. It all added up to a 27-10 win over the Bills at a snowy Highmark Stadium to earn an AFC Championship rematch in Kansas City next Sunday at GEHA Stadium at Arrowhead.

From the play calling to the execution, the Bengals played a near-perfect game in a hostile environment.

Burrow finished 23-of-36 for 242 yards and a pair of touchdowns while Mixon rushed for 105 yards and a touchdown on 20 carries.

Burrow came out on fire in the snow. He completed his first nine passes for 105 yards and two touchdowns.

On the first drive Burrow completed four passes for 65 yards, including a 28-yarder to Chase who found a soft spot in Buffalo’s secondary at the 3. Burrow scrambled from pressure and found his star receiver, who did the rest of the work for a 7-0 Cincinnati lead.

The Bengals forced a three-and-out and Burrow was just as razor sharp on his second drive, completing all five passes for 40 yards, including a perfect fade to tight end Hayden Hurst in the end zone for a 14-0 Bengals lead.

Buffalo finally answered on their second drive, marching 75 yards in 15 plays over 6:15 of the second quarter. The Bills made it 14-7 when Josh Allen ran it in on a sneak from one yard back.

Damar Hamlin, who watched the game from behind glass in a suite, cheered on his teammates. The Bills looked for some momentum as the Bengals entered the red zone late in the second quarter when the video board showed Hamlin standing up and cheering on the Bills.

The Bengals appeared to have answered with Burrow’s second touchdown pass of the day to Chase in the back of the end zone. But replay overturned the touchdown and the Bengals had to settle for a 28-yard Evan McPherson field goal and a 17-7 lead.

The Bengals were able to drive 65 yards, despite starting center Ted Karras suffering a right knee injury on the previous drive. Karras remained in the game and did not miss a snap.

The Bills opened the third quarter with a 65-yard drive in 14 plays that ended with a Tyler Bass 25-yard field goal, as the Bengals red zone defense came up with its biggest stop of the day.

The Bengals answered with a 12-play, 75-yard drive in 6:25 that ended with a Joe Mixon one-yard plunge after replay overturned the initial ruling that they he was short. The touchdown put the Bengals up, 24-10.

The Bengals made it a three-possession game when Evan McPherson drilled a 20-yard field goal with 11:22 left in the fourth quarter.