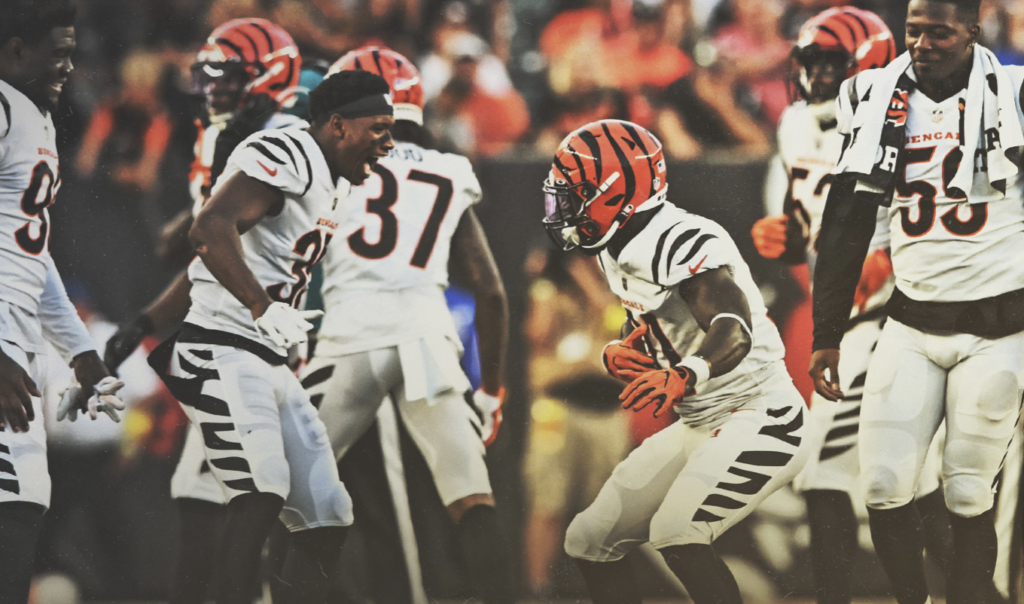 McPherson finished the preseason 9-of-10, with his only miss coming from 58 yards against the Giants in the second game.

Jake Browning found Justin Rigg for a touchdown pass of three yards with 4:34 left to seal Cincinnati’s first preseason win and finish the preseason with a 1-2 mark.

Browning to Rigg for the TD‼️

Cincinnati’s next game will be the season opener Sept. 11 against the Steelers at Paycor Stadium, where on Saturday an announced crowd of 62,499 let the Bengals know how much they’re adored.

"I did not expect to see that many people for the last preseason game" Zac Taylor gives it up for Who Dey Nation #RuletheJungle pic.twitter.com/G9b0qz1wjC

The bigger challenge comes Sunday and Monday as the Bengals cut their roster down to 53 players by Tuesday’s 4 p.m. ET deadline.

REVERSE UNO CARD! Delonte Hood recovers the ball to put us on offense ?

Dax Hill: By not dressing the rookie spent the pregame chatting up Jessie Bates on the side instead of being exposed to any potential injury. It shows the first-round pick had nothing left to prove and will be ready to play big snaps against the Steelers on Sept. 11.

Cordell Volson: He suited up but only for emergency purposes. He didn’t play and will be the starting left guard for the Bengals Sept. 11, barring injury. His competitiveness combined with Carman’s ongoing struggles (see below).

Kendric Pryor: The rookie undrafted free agent had five catches on six targets for 65 yards. Pryor had two great games at Paycor Stadium in the preseason, making the most acrobatic grab of the preseason late against Arizona. Should be good enough to seal a spot on the practice squad and an outside chance at the 53-man if the Bengals keep seven receivers.

Trayvon Henderson: Flying all over the field in the first half. Had a pick-6 in his hands over the middle but dropped it. Forced a fumble in the second quarter as Jake Funk appeared to be barreling toward the Bengal end zone. Bengals recovered and moved the ball out from their 4.

Trent Taylor: Fielded his first punt chance high and tight – and securely – and returned it 31 yards to the Rams 40, setting up Cincinnati’s first points of the night.

Trenton Irwin: Nine catches on ten targets for 93 yards. Irwin had a pair of catches in the two-minute offense that helped Jake Browning move the Bengals into the red zone before an offensive pass interference call on Thaddeus Moss wiped out his own touchdown. Bengals settled for a field goal at the gun and a 9-0 halftime lead.

Drue Chrisman: Chrisman had a strong day, likely good enough to push him past 14-year veteran Kevin Huber. He had a 41-yard punt that generated a fair catch in the first quarter and a 65-yarder in the third quarter that bounced at the Rams 4 and bounced into the end zone for a 45-yard net.

Jackson Carman: Couldn’t have gone much worse. He’s not likely to get cut but the second-rounder from 2021 had a dubious first half in his first game back from COVID. He whiffed badly on a block that allowed Dayton native Michael Hoecht to pancake Brandon Allen on a sack that knocked the Bengals out of the red zone and forced the second field goal of the day. He committed a hold on a first-and-10 from the Bengals 22, pushing the Bengals to first-and-20 from their 12. On Cincinnati’s first drive of the game, he stumbled moving to his left and got trampled on a Chris Evans run. When you play the entire preseason finale and you were the projected starting left guard, you’ve fallen quite a bit.

Kwamie Lassiter II: His odds of beating out a veteran like Trent Taylor in the punt return game were likely long to begin with but his muff of a routine punt on LA’s second punt of the game all but sealed his fate, especially when Taylor took his 31 yards on the first punt of the night. On the bright side, he caught five of seven passes for 42 yards and his toughness certainly shone through when he took a massive hit from defensive back Grant Haley at the Rams 15 and held on for a 10-yard gain a first down. Two plays later, the Bengals added their only touchdown of the night and the win was sealed.