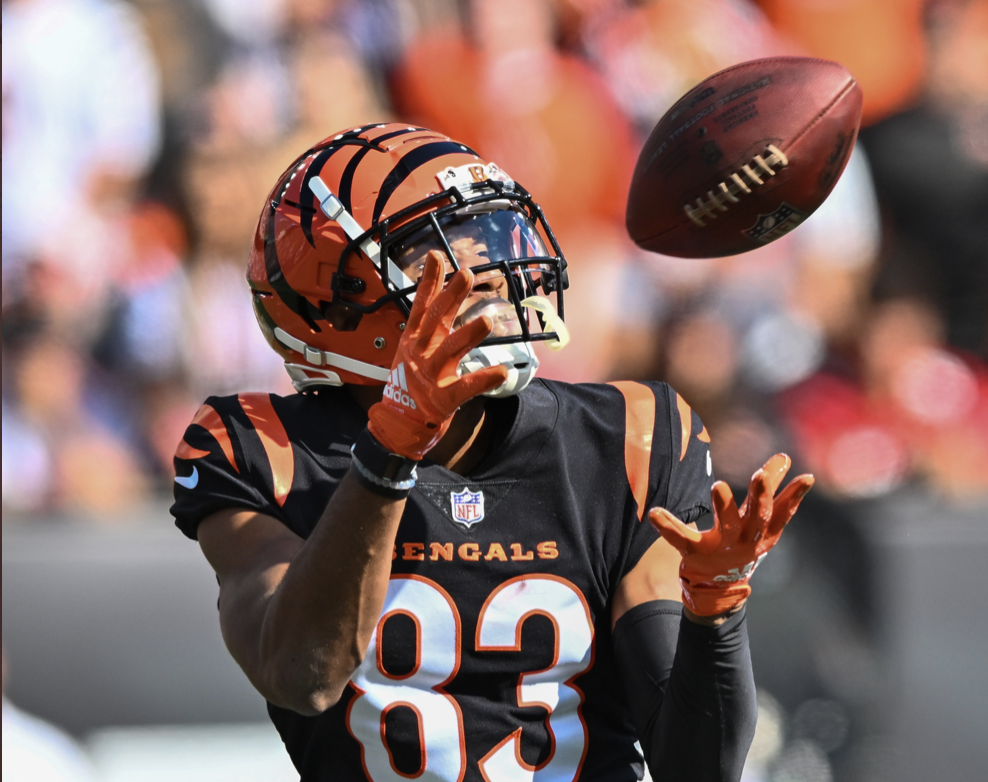 CINCINNATI — This is the offense every Bengals fan was expecting.

Joe Burrow had 345 yards passing at the half, and finished with 481, while Tyler Boyd hauled in eight passes for a career high 155 yards – including a 60-yard touchdown to open the game – as the Bengals outgunned the Atlanta Falcons, 35-17, before 66,158 at Paycor Stadium Sunday afternoon.

Ja’Marr Chase overcame a leg issue at the end of the first half and finished with 130 yards on eight catches and two touchdowns.

The Bengals finished with 537 total yards on offense.

The Bengals’ defense ran their record to seven games without allowing a second-half touchdown, the longest streak in the NFL since the Chiefs in 1997.

La’el Collins left the game for a period of time with a left ankle injury before returning and Trey Hendrickson walked off under his own power in the third quarter with a neck injury and did not return.

The win moves the Bengals above .500 for the first time this season at 4-3, with their next game coming on Halloween night in Cleveland against the Browns.

The Bengals won the toss and elected to receive, taking immediate advantage of that decision.

Burrow completed a pair of quick passes, one to Tyler Boyd for a first down and another to Hayden Hurst. After a run up the middle of seven yards by Joe Mixon, Burrow took the snap from the shotgun and had good protection, firing a perfect post route to a wide open Boyd at the Atlanta 20. Boyd jogged in for first score of the day.

The Bengals held the Falcons to one first down and forced a punt. Burrow again looked sharp with a pass over outside linebacker Lorenzo Carter to Hurst for 11 yards. He followed that up with some help from Joe Mixon, who followed Burrow to the right as the quarterback was being pressured. Burrow found him on a check down for 22 yards to the Atlanta 33.

Burrow connected with Ja’Marr Chase on a perfect back shoulder toss for 15 yards to the Falcons 18. Another Burrow dime to Chase put the Bengals at the 1. After a false start from left guard Cordell Volson, the Bengals made it 14-0 on a 1-yard plunge by Joe Mixon.

Burrow remained on fire on the third possession as he completed several passes downfield before Burrow hit Chase for a 32-yard fade to the right pylon and a 21-0 Bengals lead.

The Falcons then put together the type of drive they’re known for, a 16-play, 75-yard drive that consumed 10 minutes, nine seconds of the second quarter clock. The drive ended with a 1-yard TD run by Tyler Allgeier.

The Bengals responded quickly, capped off by back-shoulder pass from Burrow to Chase at the Falcons 25. The Falcons defensive backs overcommitted and Chase outraced them to the end zone for a 28-7 lead.

The Falcons used Damiere Byrd’s speed to burn Eli Apple and Mariota had enough time to loft a perfect 75-yard bomb that beat Apple. Jessie Bates could not get over in time to catch Byrd.

The Falcons took advantage of a short Kevin Huber punt, returning it 54 yards to the Cincinnati 25 and setting up a 43-yard Younghoe Koo field goal at the halftime gun.

After forcing the Falcons three-and-out to start the second half, Joe Burrow led the Bengals down the field but couldn’t convert third-and-inches and fourth-and-one and turned the ball over. But the Falcons wouldn’t score in the second half and the Bengals managed to put together one more scoring drive to end any hopes of an Atlanta comeback.

Burrow drove the 62 yards on seven plays, capped off by a one-yard Burrow sneak for a touchdown to put the Bengals up 35-17. The Bengals spent most of the fourth quarter simply adding to Burrow’s offensive numbers.