Bengals two Louisiana stars come through in clutch as Bengals get back to .500. 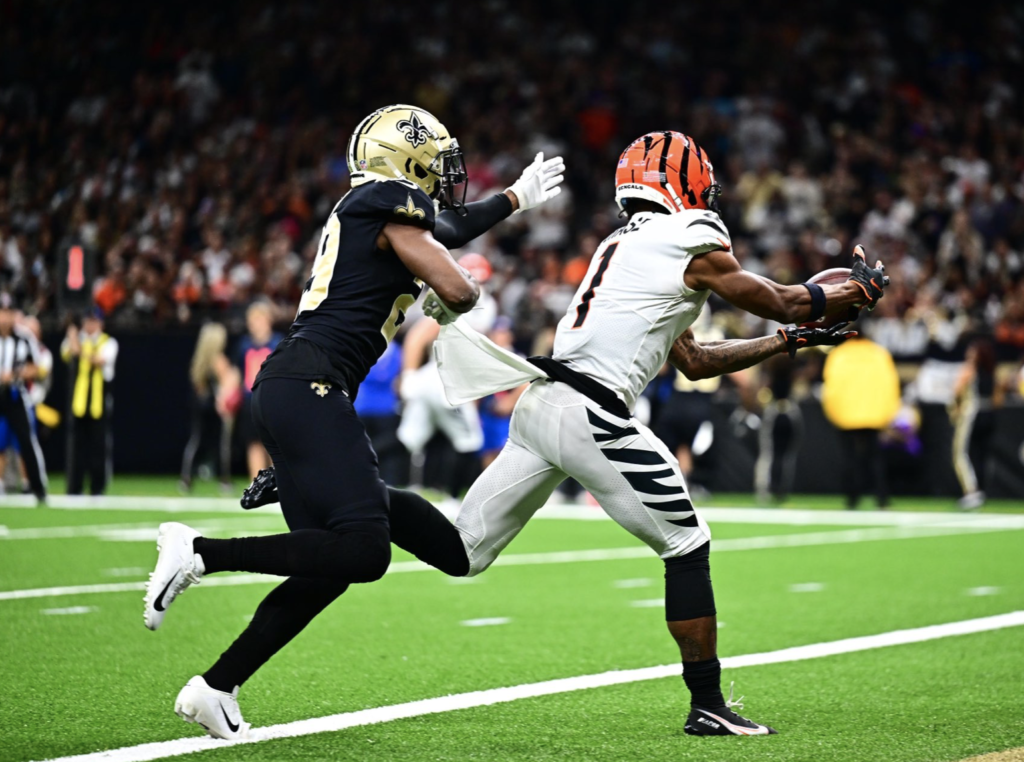 NEW ORLEANS — Joe Burrow and Ja’Marr Chase made their return to the Bayou a dramatic and successful one.

Burrow’s second touchdown pass of the day to Chase on a sideline route was a 60-yard completion down the left sideline with 1:57 remaining to give the Bengals their first lead of the day in a 30-26 Cincinnati win.

Burrow, who also ran for a 19-yard score, finished 28-of-37 for 300 yards and three touchdowns in his return to the building where he completed a 15-0 national championship season for LSU in 2019. Chase had seven catches on 10 targets for 132 yards and two touchdowns.

After holding Andy Dalton to a three-and-out, Burrow got the ball back on the Cincinnati 40 and immediately found Chase on the left sideline. Chase broke two tackles and jogged into the end zone.

The Bengals allowed Dalton to move the Saints into Bengals territory before BJ Hill and Sam Hubbard sacked him on third down at the Cincinnati 48 to force 4th-and-17. Dalton’s 4th down pass fell incomplete at the 10.

Playing a team led by former Bengals quarterback Andy Dalton and featuring big plays from Taysom Hill, Mark Ingram and Rashid Shaheed, the shorthanded Saints held the lead for most of the game before an energized Caesars Superdome crowd.

The Bengals lost linebacker Logan Wilson to a right shoulder injury and defensive tackle Josh Tupou to a calf injury. Wilson suffered the injury in the third quarter while Tupou was injured on final drive of the first half.

With just under five minutes remaining, the Bengals drove for the potential go-ahead score, Burrow took back-to-back sacks, putting the Bengals in a third-and-27 at the New Orleans 41. The Bengals settled for a 52-yard field Evan McPherson field goal.

The Bengals suffered through another terrible start. The Bengals went three-and-out after Joe Mixon missed a block on an A-gap blitz over center after Burrow moved him into position for the pressure.

Instead of running the ball, Zac Taylor called for a pass play and Demario Davis broke through and brought Burrow down for a sack on third-and-1 from the Bengals 34.

After the defense forced Andy Dalton and the Saints offense off the field, the Saints punted and Trent Taylor committed his first big mistake with the Bengals, fumbling the ball at the Bengals 23. It was recovered by Adam Trautman at the Cincinnati 32.

It didn’t take long for Dalton, Taysom Hill and the Saints to respond. Alvin Kamara had a seven-yard run up the middle. Hill found Marquez Callaway for seven yards and Dalton completed the drive with an 18 yard slant to Tre’Quan Smith inside Mike Hilton for a touchdown.

The Bengals went three-and-out on their next possession but finally found their rhythm on their third drive of the first quarter.

Burrow, making use of shorter over-the-middle routes, found Tyler Boyd and Ja’Marr Chase for third down completions. And on third-and-goal from the Saints 9, Burrow had the protection to make his progressions and check down to a wide-open Mixon at the 5. Mixon did the rest by crashing into the end zone.

But the Saints came right back and answered on the first drive of the second quarter, gashing the Bengals defense with several chunk plays, including Mark Ingram’s 14-yard run leading up to a direct snap to Rashid Shaheed’s jet sweep around right end for a touchdown to make it 14-7.

After the Bengals decided not to go for fourth and less than one at their 34, the Saints again ran wild through the defense. Kamara had a 24-yard run and that was followed by a 31-yard run by Hill to the Bengals 20. The defense stiffened long enough to hold the Saints to a 35-yard field goal by Wil Lutz and a 17-7 Saints lead.

Needing desperately a touchdown, Burrow delivered a 10-play, 75-yard drive, capped off by a 19-yard scramble under pressure. Burrow escaped the pocket and raced to the end zone to cut the lead to 17-14.

But the defense could not get off the field. On the last drive before the half, Eli Apple surrendered a 20-yard completion to Callaway on third-and-10 and a 15-yard completion on third-and-11. The Bengals allowed three different third-down conversions on passes before holding for a 30-yard Lutz field goal.

The Bengals defense appeared ready to get off the field when they had Andy Dalton backed up for third-and-25 from the Saints 23. But Trey Hendrickson was called for roughing the passer at the Saints 12 when he pushed Dalton to the ground.

That set up the Saints to kill another five minutes of the third-quarter clock with a drive that consumed half of the period to begin the second half. The drive ended with a 37-yard field goal.

Lutz added his fourth field goal of the day from 31 yards as the Saints grinded out another 14-play scoring drive.

In between, Joe Burrow hit Ja’Marr Chase with a 15-yard slant that capped a seven-play, 74-yard scoring drive.