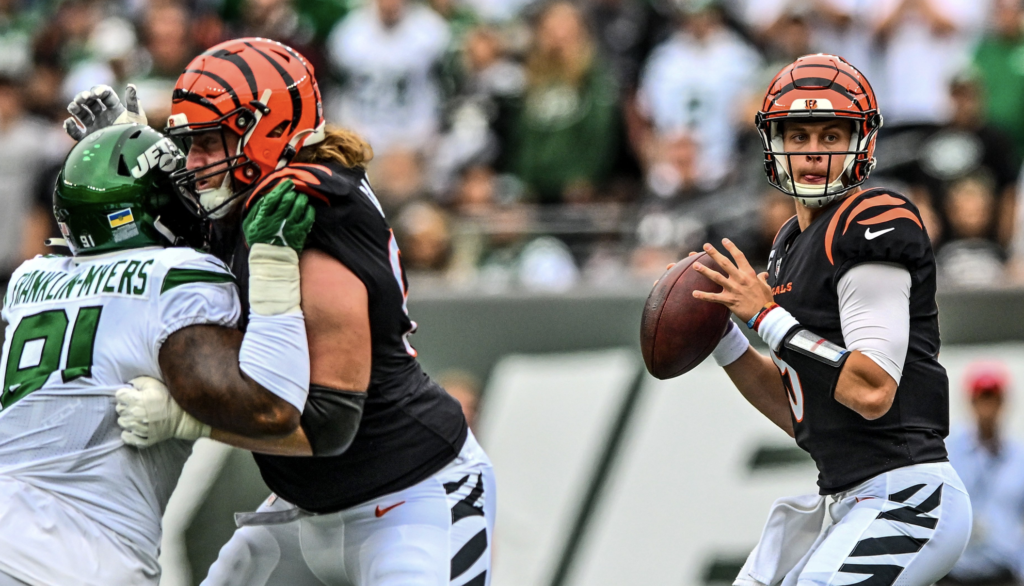 EAST RUTHERFORD, N.J. — The Bengals have finally taken flight with a win.

After back-to-back three-point losses to open the season, the Bengals got three touchdown passes from Joe Burrow and three strip sacks from Trey Hendrickson to beat the New York Jets, 27-12, Sunday at MetLife Stadium.

It was just the second win ever in 16 games in the Meadowlands for the Bengals.

The win came at some expense as DJ Reader left late in the first half with a left knee injury and did not return.

The Bengals mixed things up a bit to start the game and to jump start their offense when they won the toss to begin the game and elected to receive to start.

It paid immediate dividends as the Bengals marched 75 yards in 11 plays, capped off by a 12-yard touchdown pass from Joe Burrow to Samaje Perine.

Burrow had 95 yards passing on the opening drive as the Bengals had to overcome a false start and a holding penalty on Cordell Volson on a quick pitch to Tyler Boyd for a touchdown. After a two-yard Mixon run, Burrow scrambled to his left and found Perine in the front of the end zone.

The Bengals took a 14-6 lead on their first truly explosive pass play of the season on the last play of the first quarter. Burrow dropped back and found Tyler Boyd over the middle. Boyd ran into safety Jordan Whitehead and bounced off him and sprinted the final 40 yards for the score.

Another explosive play, a 45-yard bomb down the right side to Tee Higgins (with Sauce Gardner in tight coverage) plus a dirty shot to the head from safety Lamarcus Joyner put the Bengals at the Jets 15. But the Bengals stalled and settled for a 22-yard Evan McPherson field goal.

Higgins, who made a spectacular catch on the play, left the game for a short time to be evaluated for a concussion but returned later in the quarter.

The Bengals had the opportunity to add to their lead when Logan Wilson picked off Joe Flacco and returned it to the Jets 18 before fumbling and Tre Flowers recovered. But the Bengals offense stalled again in the red zone, settling for a 43-yard McPherson field goal.

The Jets took advantage of good field position at the end of the half and Greg Zuerlein connected from 50 yards at the gun to narrow Cincinnati’s advantage to 20-9.

The Bengals came out and not only stopped the Jets on their first drive but recorded their second turnover, as Trey Hendrickson and Joseph Ossai got to Flacco for a strip sack that was recovered by B.J. Hill at the Jets 24.

The Bengals took advantage when Burrow threw his third touchdown, a 5-yard dart to Ja’Marr Chase. Burrow took a big hit from Carl Lawson on the play.

The Bengals sealed the game when Trey Hendrickson recorded his third sack of the game on Joe Flacco when the Jets had fourth-and-6 at the Cincinnati 14 with 10:09 left.

Former Cincinnati Bearcats All-American corner Sauce Gardner showed why he was the No. 4 overall pick, with great one-on-one coverage for most of the day, especially on Chase.

Jessie Bates intercepted a tipped Flacco fourth down pass with 55 seconds left as the Jets were driving in the red zone.