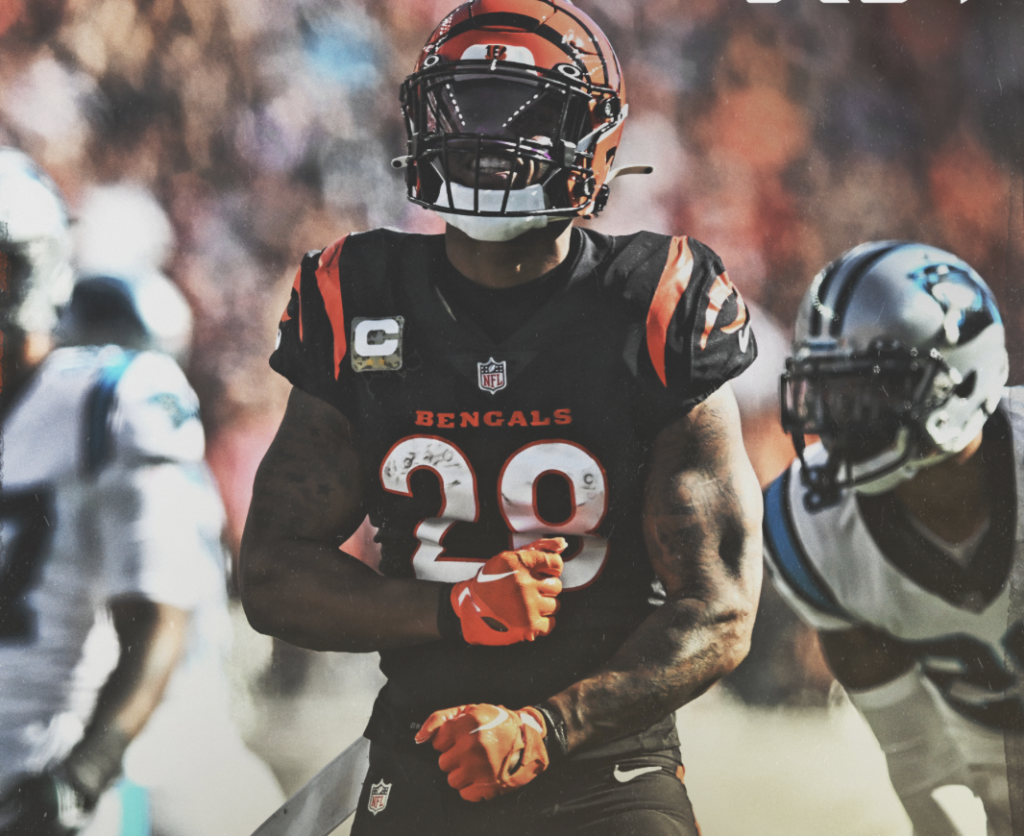 CINCINNATI — Joe Mixon made sure the Bengals ran into the bye with momentum, feel-good vibes and a record-setting mark.

The Bengals star running back scored a franchise-record five touchdowns, four on the ground and one receiving, while the defense smothered Carolina’s offense early as the Bengals routed the Panthers, 42-21, Sunday on a spectacular day before 66,160 at Paycor Stadium.

The Bengals head into their bye with a 5-4 record, a half-game behind the Baltimore Ravens, who play Monday night in New Orleans. The 5-4 record matches Cincinnati’s mark at the bye in 2021, when the Bengals won five of their next seven games to win the AFC North.

Mixon, who finished with 153 yards on 22 carries, fell just one touchdown shy of the NFL record held by Gale Sayers, Dub Jones and Alvin Kamara, who most recently set the mark on Christmas, 2020 for the Saints.

By halftime, Mixon had already tied the franchise record of four touchdowns, shared by Marvin Jones, Larry Kinnebrew and Corey Dillon. The Bengals raced out to a 35-0 halftime lead as Carolina’s only first down came with 3:28 left in the first half when Cam Taylor-Britt committed an illegal contact foul.

The Bengals didn’t need much from Joe Burrow, who ran for a touchdown and threw for another, finishing with 206 yards on 22 of 28 passing. He was 5-for-5 for 59 yards on the opening drive, a drive that ended with Mixon’s 2-yard run, capping a 9-play, 90-yard scoring drive.

Burrow’s day was done when he was pulled with 3:42 left in the third quarter for back-up Brandon Allen.

There was unfortunately more bad injury news for the Bengals. In the first half as running back Chris Evans suffered a right knee injury and did not return.

Then on Carolina’s first touchdown, a Baker Mayfield pass to tight end Tommy Tremble on the opening drive of the third quarter, Dax Hill fell hard on his right shoulder, went to the medical tent for approximately 10 minutes and then left for the locker room.

Mayfield connected on a 21-yard touchdown pass to Terrace Marshall over Cam Taylor-Britt down the left sideline in the fourth quarter to cut the lead to 42-14.