Bengals will face Bills in Orchard Park in Divisional Round. 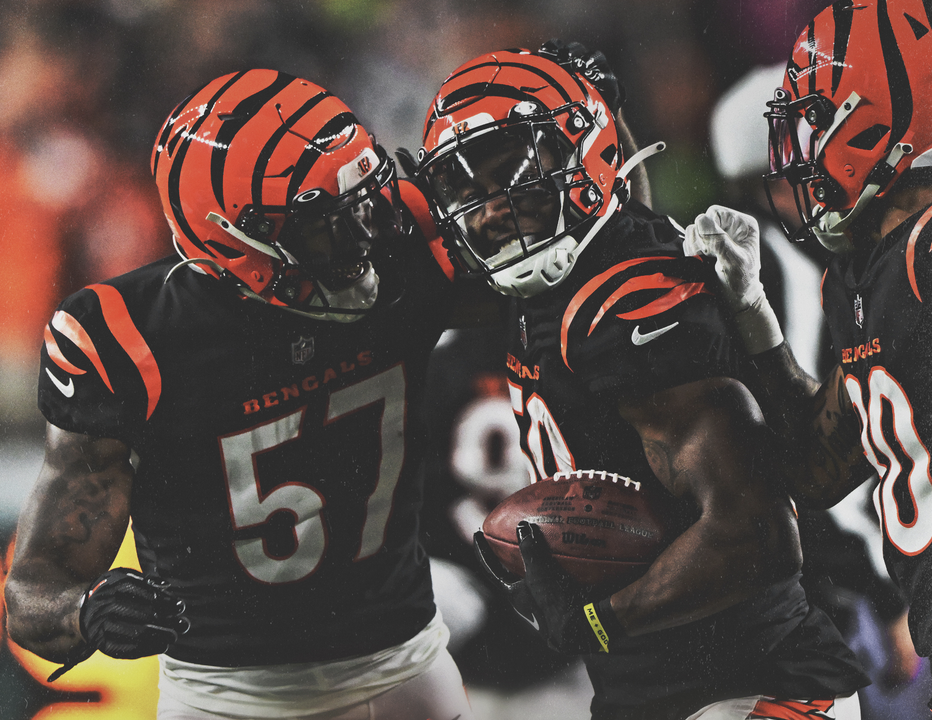 CINCINNATI — The Bengals needed a miracle. Logan Wilson and Sam Hubbard gave them one.

With Ravens about to take a touchdown lead against a Bengals team that had lost its mojo on offense, Wilson knocked the ball out of Ravens quarterback Tyler Huntley’s hands just as he leapt at the goal line. Sam Hubbard grabbed the ball out of midair at the Bengals 2 and rambled 98 yards for a stunning go-ahead touchdown.

The Bengals needed one final stop when their offense stalled twice in the fourth quarter. The Ravens got the ball at the Bengals 46 with 3:12 left in regulation and the Bengals leading 24-17. They drove to the Bengals 27. A Hail Mary in the end zone fell incomplete on fourth down to end the game.

The score proved to be the difference as the Bengals held on for a heart-pounding 24-17 wild card win before 66,399 at Paycor Stadium that sends them to the divisional round next weekend against the Bills in Orchard Park, N.Y.

The Bengals dominated the first quarter by dominating time of possession, with some help form the Bengals defense.

Tyler Huntley returned after taking Week 18 off to rest a sore shoulder and wrist and threw an interception on Baltimore’s fifth play.

Akeem Davis-Gaither stepped in front of Mark Andrews and picked off Huntley at the Bengals 40.

Joe Burrow marched the Bengals 60 yards in 10 plays, capped off by a seven-yard dart over the middle to Ja’Marr Chase at the Ravens 2. Chase dragged two defenders into the end zone for the touchdown and a 9-0 Bengals lead.

Not too sure what's going on here 😂#BudLightCelly | @budlight pic.twitter.com/m0eZM3K8fe

Evan McPherson sailed the extra point wide right for his first postseason miss in 22 kicks. He was a perfect 20-for-20 last year, including 14-for-14 on field goals.

The Ravens responded with a classic grind-it-out drive, going 75 yards in 17 plays, converting seven first down and chewing up 10 minutes, three seconds of the second quarter clock. The key play of the drive was a facemask penalty on Bengals defensive back Dax Hill.

Instead of fourth down and a likely field goal attempt after a sack by Joseph Ossai and Vonn Bell, the Ravens got a new series of downs at the Bengals 3. On third-and-2, Huntley hit JK Dobbins in the flat and as he was falling to the ground, he reached out his right hand with the ball and broke the plane of the goal line before landing at the Bengals 1.

Disaster struck on the Bengals next series. Following a sack of Burrow, the Bengals faced third-and-15. Burrow threw an outlet to pass to tight end Hayden Hurst. Hurst fumbled at the Bengals 40. Meanwhile, on the other side of the field, Jonah Williams had his left knee buckle as he released his block. He limped off the field, went to the medical tent before making his way to the locker room.

The Ravens marched down the field, aided by a great bit of luck. Huntley head on first down at the Bengals 33. He picked up the ball at the Bengals 48 and somehow managed to find tight end Josh Oliver cutting back across the field for a 19-yard gain.

The Ravens moved the ball to the Bengals 3 where the Bengals held to a 22-yard Justin Tucker field goal and a 10-9 halftime lead, with the difference being the McPherson extra point miss.

The Bengals allowed a first down on the Ravens’ first drive of the second half but Logan Wilson chased down Huntley from behind on third down to force a punt.

With Jackson Carman replacing Jonah Williams at left tackle, Burrow marched the Bengals 83 yards in 12 plays, initially connecting with Hurst from 19 yards out for a touchdown.

But replay reviewed and spotted the ball six inches from the goal line. Burrow scored on a keeper on the next play and then found Tee Higgins for the 2-point conversion and a 17-10 lead.

But the Ravens came back to tie the game when Tyler Huntley pumped to the inside and got Eli Apple to bite on the play. Demarcus Robinson then just ran past Apple for a wide-open pass from Huntley for a 41-yard touchdown with 2:13 left in the third quarter.

After the Bengals went three-and-out, Tyler Huntley found Mark Andrews for 25 yards on third-and-1 and then ran for 35 yards off the left side down to the Bengals 2. Jessie Bates forced the quarterback out of bounds, a play that would become critically important moments later.

On third down, Huntley attempted to go up and over but Logan Wilson forced the ball loose. Sam Hubbard picked the ball up at the Bengals 2 and raced 98 yards to the longest postseason fumble return for a touchdown in NFL history.