Bengals two over .500 for first time in '22, stay game behind Baltimore. 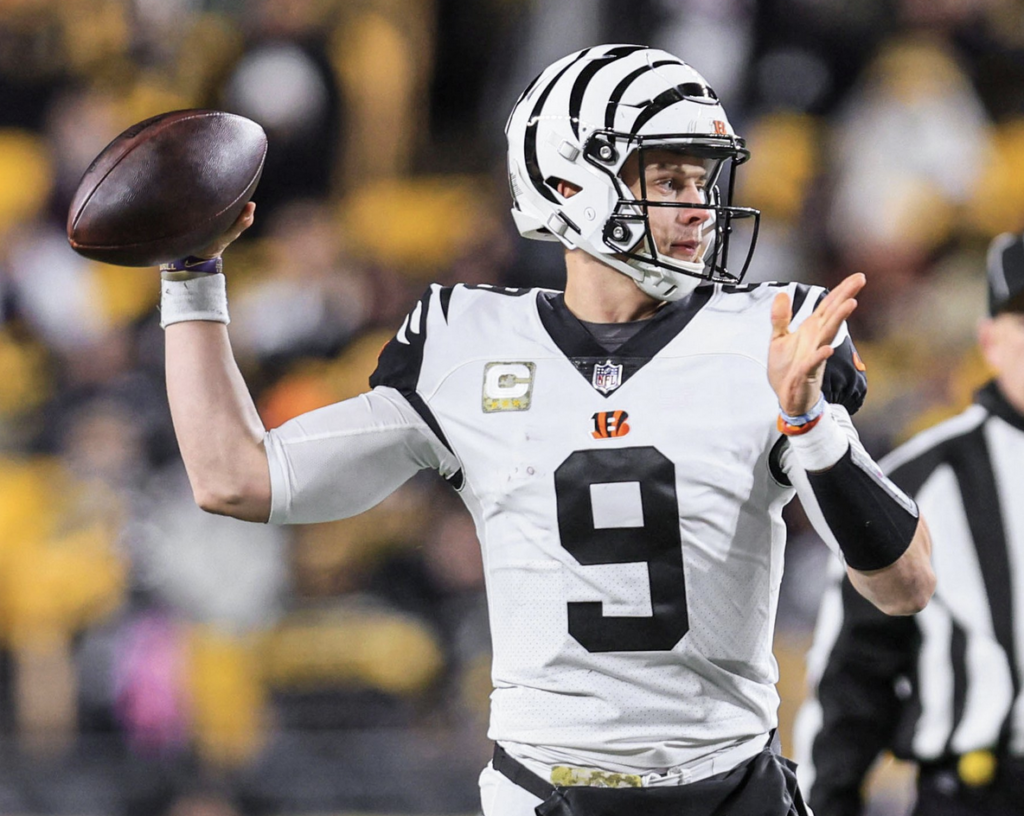 PITTSBURGH — Samaje Perine did his best Joe Mixon impersonation just when the Bengals needed him the most.

The running back caught three touchdown passes from Joe Burrow and the Bengals overcame the loss of Joe Mixon to a first half concussion to beat the Pittsburgh Steelers, 37-30, Sunday before 66,401 at Acrisure Stadium. Tyler Boyd captured the onside kick with 45 seconds remaining to secure the win.

Joe Burrow completed 24-of-39 passes for 355 yards and four touchdowns while Tee Higgins caught nine passes on 13 targets for 148 yards and Trenton Irwin caught his first career touchdown pass. Burrow became the third-fasted to reach the 10,000-yard passing plateau, doing so in his 35th NFL game.

Perine became the first running back in team history to catch three touchdown passes in one game.

The Bengals defense, which allowed five third down conversions on seven attempts in the first half, allowed just three points and forced three key three-and-outs in the third quarter as the Bengals improved to 6-4 and remain just a game behind Baltimore in the AFC North. The Ravens beat the Panthers, 13-3, Sunday. The Bengals play at Tennessee next Sunday and opened as a 1.5-point road favorite.

Each team went three-and-out on their first series.

The most notable part of the Bengals first series was how it ended – on a 54-yard punt by Drue Chrisman, a punt that sailed high and deep to the Steelers 7. Steven Sims muffed the punt and had to chase it down in the Steelers end zone before the Bengals pinned them down at the 5.

The Bengals forced a three-and-out.

The Bengals were then able to move the ball downfield, with the key play coming on a 21-yard completion to Hayden Hurst. Instead of going for it on 4th-and-1 from the Pittsburgh 27, Zac Taylor opted for the 45-yard field goal, which was good for a 3-0 lead.

Then the Steelers answered with a field goal drive of their own.

The Bengals put together a pair of touchdown drives thanks to the hands of Tee Higgins and the feet of Samaje Perine. With the game tied, 3-3, Burrow engineered a six-play, 79-yard drive that featured a 24-yard in-route to Joe Mixon that took the ball to the Steelers 30. Two plays later, Burrow dumped a short pass to Perine, who scampered 29 yards down the right sideline for the touchdown.

On their second drive of the second quarter, Burrow connected with Tee Higgins four times for 55 yards that got Cincinnati down to the Steelers 11. On the next play, Burrow found Perine in the flat and Perine toe-tapped down the right sideline for his second touchdown, capping a 10-play, 92-yard drive.

The second Bengals touchdown came after Najee Harris burned the Bengals to the left side for a 19-yard run, leaping over Jessie Bates at the 2 yard line.

Blitz didn’t get home in time and, with miscommunication in the secondary, Eli Apple couldn’t get over to Pickens and Pickett hit the wide open receiver at the five and Pickett trotted in to tie the score, 17-17.

The Steelers were 5-for-7 on third down.

The Bengals got the ball back and had the chance to take the lead before the half but Burrow was intercepted by Levi Wallace at the Pittsburgh 44. That led to a go-ahead field goal for the Steelers at the halftime gun and a 20-17 Pittsburgh lead.

The Bengals finally took advantage when Burrow drove the Bengals down to the Steelers 1 in six plays. On the next play, Burrow rolled to his right, escaping pressure, and found Trenton Irwin for his career touchdown and a 24-20 lead.

T.J. Watt reprised his incredible interception of opening day when he picked off Joe Burrow at the Cincinnati 21. But the Bengals held rookie Kenny Pickett in check and the Steelers settled for a 30-yard field goal at the third quarter gun to make it a one-point game, 24-23.

But the Bengals were able to hold off, thanks in part to a clutch 54-yard field goal early in the fourth and Perine’s third touchdown of the game.