Defense and special teams carries the day as Bengals get back to .500 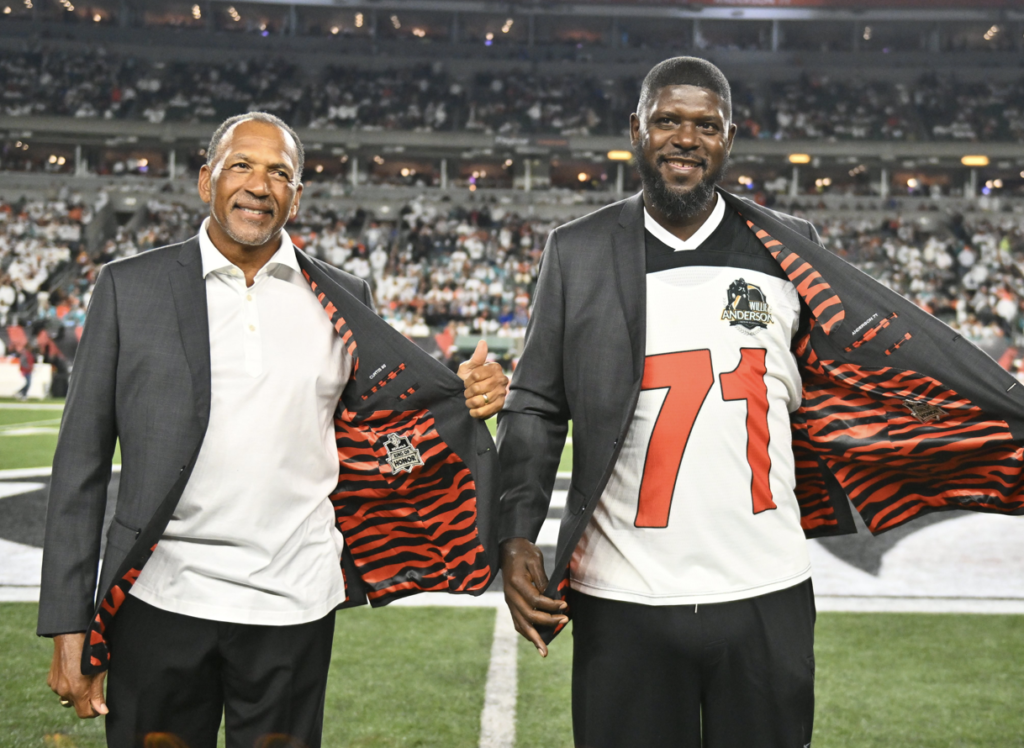 CINCINNATI — In a game the franchise quarterback came on strong at the end, the defense and special teams carried the Bengals back to break even.

Joe Burrow threw a 55-yard touchdown to Tee Higgins, Joe Mixon rushed for his first touchdown and Evan McPherson connected on a 57-yard field goal as the Bengals overcame offensive struggles throughout to capture a 27-15 win before a Cincinnati record crowd of 67,260 to move to 2-2 on the season.

Vonn Bell had a pair of interceptions to lead a defense that stopped Miami three times on third down in short yardage situations, forcing field goal attempts each time. Bell’s second interception sealed the game for the Bengals.

Logan Wilson and Mike Hilton made big individual stops on third down and Jessie Bates tackled Raheem Mostert before he could get to open space in the fourth quarter with the Bengals holding onto a 20-15 lead.

The game was overshadowed by a head and neck injury to Dolphins quarterback Tua Tagovailoa midway through the second quarter on a sack by Josh Tupou. Tagovailoa lay motionless at midfield before being taken off on a stretcher. The injury came four days after Tagavailoa was visibly wobbly after getting hit in the first half of Miami’s win over Buffalo.

Tagovailoa was expected to travel back to Miami with the team after getting checked out at a medical center in Cincinnati.

“It was a scary moment. He was evaluated for a concussion and he’s in the concussion protocol,” Miami head coach Mike McDaniel said. “He was at the hospital. That was an emotional moment. That is not part of the deal that anyone signs up for even though you know it’s a possibility in football to have something that you have to get taken off in a stretcher.

“All of his teammates, myself, we’re all very concerned. The best news that we could get is that everything is checked out, that he didn’t have anything more serious than a concussion. He’ll be flying back with us here on the plane.”

With the Dolphins trailing just 20-15 after McPherson’s 57-yard field goal, they drove to the Cincinnati 26 before Bell picked off his second pass of the night at the Bengals 5 and returned it to the Miami 45. A Burrow touchdown pass of five yards to Hayden Hurst with under two minutes left sealed the win.

For the second straight week, the Bengals came out hot on offense. The big plays on the first drive including a Joe Burrow to Hayden Hurst for 19 yards on third-and-1 at the Cincinnati 34. Hurst was fired up after dragging several Dolphins over five yards at the end of the reception.

The Bengals built on that momentum and drove 75 yards, capped off by a bull rush of five yards into the end zone by Mixon on third-and-inches. The entire offensive line helped forced Mixon over the goal line.

The Dolphins aided the Bengals cause when defensive back Keion Crossen fell on Hurst after a six-yard reception. Instead of third-and-2 at the Miami 29. The Bengals had first and 10 at the Miami 14.

The Dolphins responded with a drive of their own, marching quickly down on the edge of the red zone in three passes by Tagovailoa. But Mike Hilton had solid coverage on Chase Edmonds on a pass targeted for him in the back of the end zone. Edmonds dropped the ball and likely would not have come down in bounds with the ball.

The defense created an opportunity on their next possession when Vonn Bell came over and picked off a Tagovailoa pass intended for Tyreek Hill. The Bengals appeared ready to capitalize as they marched to the Miami 24. But on fourth-and-1, like last week, the Bengals decided to go with a wide run play. This time Mixon got stretched out and couldn’t make a yard for the first down.

The Dolphins drew to within a point when Jason Sanders connected from 48 yards early in the second quarter.

The Bengals defense made several big stands in the first half, including a blocked field goal on Miami’s next possession as rookie Jeff Gunter broke through and blocked a 52-yard field goal attempt.

With the offense desperate to get on track, the Bengals then got an explosive play when Tee Higgins beat top corner Xavien Howard for a 59-yard touchdown on a pass he caught at the 30 and jogged easily into the end zone.

After Tagavailoa left the game on the stretcher, the Dolphins closed to within two points before the half on a shuttle pass from Teddy Bridgewater to Chase Edmonds.

Bengals Beat: ‘Togetherness’ Is The Bond That Holds These Bengals Together

W2L4: How Bengals Ignore The Noise And Beat Chiefs To Punch Ticket To Super Bowl LVII