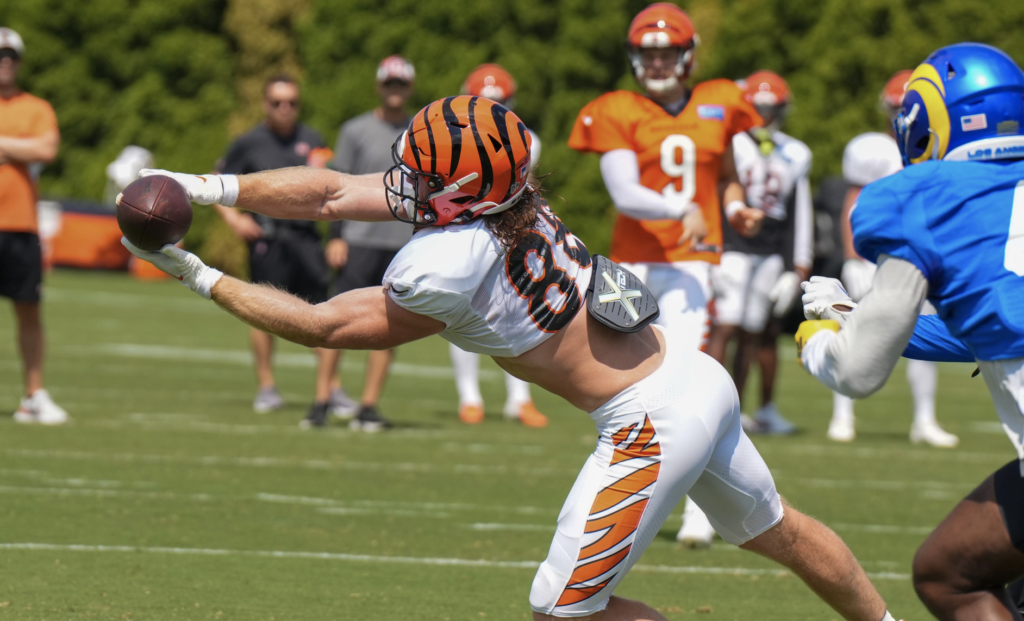 With Joe Burrow back from his appendectomy and on the practice field for 11-on-11s this week against the Rams, and Jessie Bates having signed his fully guaranteed $12.91 million franchise tag, the team has all the pieces in place they envisioned heading into a season they hope will end with the prize they missed by 85 seconds last February.

Bates was limited to just individual drills Wednesday in the first of two joint practices with the Rams before Saturday’s preseason finale at Paycor Stadium. But both Bates and Zac Taylor are confident that the veteran safety will be more than physically and mentally prepared to play in the Sept. 11 opener against the Steelers.

Burrow met his stiffest challenge of camp Wednesday when he went up against a Rams defense that foiled him on the final drive of Super Bowl LVI. Aaron Donald wasn’t crashing through the line and getting in Burrow’s face but there was pressure and tight coverage on the outside that made completing passes very difficult early on Wednesday.

Passes for tight end Hayden Hurst, Ja’Marr Chase and Tee Higgins were either knocked away by Rams defenders in tight coverage or just overthrown.

But as practice wore on, Burrow hit his stride, completing several passes over the middle to Tyler Boyd and Ja’Marr Chase. Burrow hit Higgins on a beautiful 60-yard bomb down the right sideline to Higgins but the play was called back on a hold in the backfield, something that has been an unsettling part of the preseason so far.

Offensively, practice ended on a positive note when Burrow connected with Chase, who made a spectacular one-handed, toe-tap catch on the far sideline in front of the east hedges of the practice field to convert a first down.

“First off, a perfect pass by Joe once again,” Chase told me. “He’s like the MJ effect. He helps people play better than he’s out there. I had an out-route and (Jalen) Ramsey broke because he had eyes on the quarterback and I just had to block him off with my body and make a contested catch at that point.”

Asked Ja'Marr Chase about his one-handed, toe-tap grab on sideline that led to first down. "Perfect pass" from Joe Burrow who Chase says has Michael Jordan effect making everyone better. #RuleTheJungle pic.twitter.com/bPYwvDhBFQ

In two-minute mode, Burrow moved the offense down inside the 40 and Evan McPherson hit from 56 yards to end practice.

Defensively, the Rams and Matthew Stafford started quickly, completing over 20 passes against the Bengals first team playing without Eli Apple, who was out with a quad issue that forced him to have fluid removed. It’s not expected to be a long-term matter. Apple will miss both days of joint practices.

Stafford completed several check down passes and in the red zone, hit Allen Robinson II and Cooper Kupp for touchdowns. Robinson was defended by Chido Awuzie while Mike Hilton was defending Kupp.

Other notable observations from Wednesday:

While Evan McPherson continues to shine in preseason and in camp, he did miss two kicks on Wednesday, one from beyond 45 yards and the other from beyond 50. Both misses were wide right. His final kick was good from 57 and just cleared the crossbar. He made six of eight kicks on the day.

Mike Hilton and Tre Flowers collided late in practice when a Matthew Stafford pass for Cooper Kupp over the middle was picked off by Vonn Bell. Flowers and Hilton both hit the turf and Flowers got up first before Hilton was able to get to his feet, flex his knees and make his way off.

It turned out to be just a knee-knocking moment and both said they were fine after practice.

Coach Zac Taylor acknowledged Wednesday that the Bengals wouldn’t be having these joint practices had he not taken a call from old friend and Rams head coach Sean McVay.

“We wouldn’t have practiced with anybody had Sean not called,” Taylor said. “Most of the dancing partners got snatched up while we were going to the Super Bowl. A bunch of people reached out to me in January and February and I wasn’t very responsive at the time. So I thought that ship had sailed then when Sean called and asked if we would come out here would you want to practice together and I said, ‘Yeah, we’d love to.’

“When you’ve got good relationships with the other staff that is helpful because you can communicate a little bit more freely instead of trying to sort out what is important to them at practice, how they manage their players. I’m not going to say it doesn’t work but it is probably a little easier when we have a relationship with the other coach.”