Defense was the theme of the day for both Rams and Bengals. 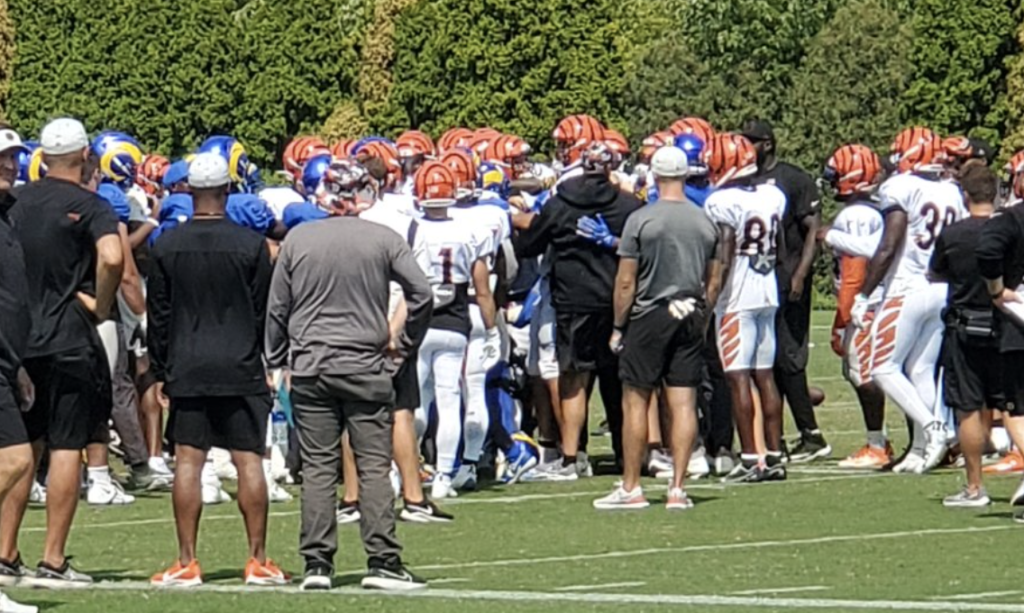 CINCINNATI – What happened late Thursday afternoon on the Kettering Health practice fields outside Paycor Stadium was predictably explosive and dangerous.

Whenever a man of the strength of Aaron Donald throws around not one but two full size football helmets and starts slamming people on the heads with them, the only safe outcome is an awkward tumble to the ground.

That’s precisely what happened and it was Donald who fell to the ground in a heap as he lost his balance in rage.

After a quiet, well-behaved day on Wednesday, the heat and tempers boiled over Thursday. What’s also important to consider – and a fortunate – is that none of the parties involved in Thursday’s fracas will not be playing in Saturday night’s exhibition game at Paycor Stadium.

In nothing else, it adds a little more drama to the Super Bowl LVI rematch in an otherwise ordinary end to the preseason.

What precipitated the all-out brawl is unclear. But what was more than clear is that Donald was enraged by something the Bengals offensive line, led by the frustrated La’el Collins, and Donald erupted.

“It just got a little scuffly and so we just called it,” head coach Zac Taylor said. “We were in the last period and we got two really good days of work in so was it worth getting the extra couple of plays? Nah, so we called it off. We good two days of work in and we’ll go play on Saturday.”

“If you didn’t have a relationship with the other staff that makes things a little more difficult,” Taylor said.

The Donald behavior came as Collins and Rams linebacker Leonard Floyd were fighting and throwing haymakers of their own.

“I won’t get into what happened. It’s over, we got two good days of work in and everyboyd is healthy,” Taylor added.

Donald will almost assuredly not be suspended by the NFL as the league leaves it up to the clubs participating in all training camp practices to administer on-field discipline. This is why Myles Garrett was suspended six games for taking Mason Rudolph’s helmet and slugging him with it in Nov. 2019.

Collins was already having a very rough day with a combination of speed and power rushes before getting into it with Rams linebacker Leonard Floyd twice in a pair of skirmishes, tossing a Rams helmet aside.

On the first scuffle, Ja’Marr Chase, running a go route, had just caught a 60-yard TD pass from Joe Burrow. The scuffle broke out as Chase was making his way back up the field.

Brandon Allen came in for a play and then Burrow returned and another skirmish broke out. After a running play, Burrow ran another pass play. Then the all-out brawl broke out.

Zac Taylor says practice was nearly over when final fight broke out when Aaron Donald swung a Bengals helmet and came down hard on someone's head. pic.twitter.com/qLSy0NTneE

Other notable observations from Thursday:

Joe Burrow did have a touchdown connection to Ja’Marr Chase and a TD to Tyler Boyd on a skinny post in 7-on-7s, the offensive line struggled to give Burrow a clean pocket, as he ran to his right several times. Some of those runs could have been by design but there were many times where the Rams had a free rusher. Burrow was picked off by Jalen Ramsey on one of those rollouts.

It turned out to be just a knee-knocking moment and both said they were fine after practice.

One day after getting burned by Cooper Kupp and Allen Robinson II, the Bengals defense and specifically the secondary exhibited tighter coverage. Chido Awuzie had good coverage on Cupp twice in the end zone on red zone shots by Matthew Stafford.