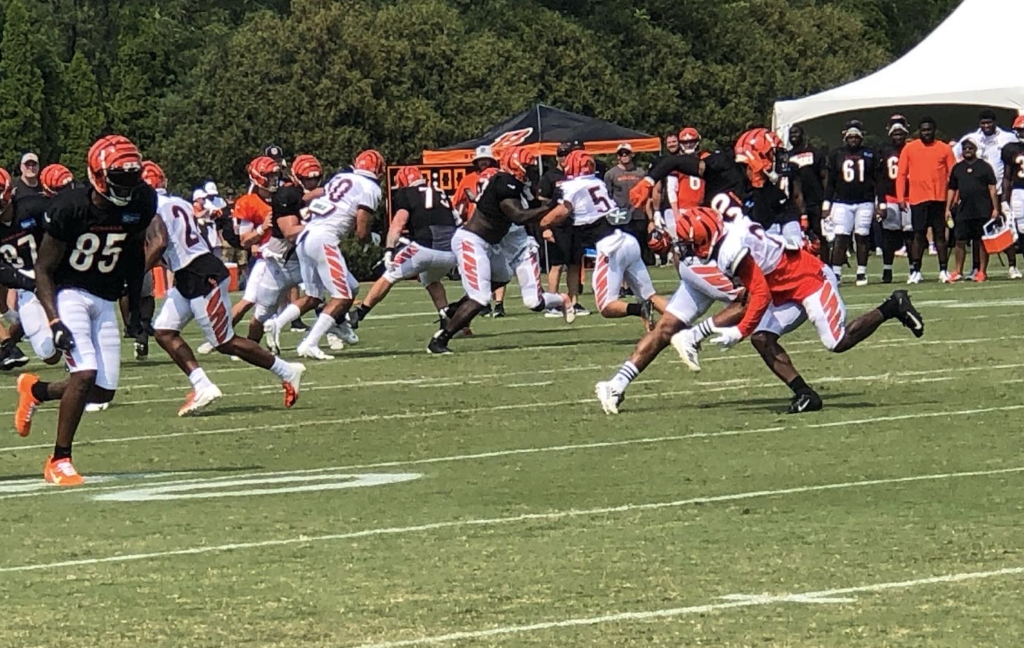 CINCINNATI — The Bengals open the preseason against the defending Super Bowl champions on Saturday but the competition within their roster that will really heat up this weekend at Raymond James Stadium.

With Joe Burrow and Joe Mixon ruled out of this game, the true competition for depth spots will begin at some key positions.

Heading into the game, here’s a look at my projection for the roster:

QUARTERBACK (2):
Joe Burrow, Brandon Allen
CUTS: Kyle Shumur, Eric Dungey
Allen has been the second-biggest story at this position in camp, impressing with the command of the second unit and showing off an arm that helped lead the Bengals to their only road win in the Zac Taylor era last year in Week 16 in Houston. Shumur and Dungey should be playing for either a practice squad spot or a spot on another roster.

RUNNING BACK (4):
Joe Mixon, Samaje Perine, Chris Evans, Jacques Patrick
CUTS: Trayveon Williams, Pooka Williams Jr.
The battle right now is for the fourth spot. Patrick has the size. Both Williams have the speed. Patrick, a 231-pound HB, could provide some blocking depth if the Bengals go “Jumbo” in short yardage and goal line, two areas they must succeed with Mixon.

OFFENSIVE LINE (10): Trey Hopkins, Trey Hill, Jackson Carman, Quinton Spain, Jonah Williams, Riley Reiff, Xavier Su’a Filo, Michael Jordan, D’Ante Smith, Billy Price
Price and Jordan have the most to prove in their three preseason opportunities. They positively must show that they won’t be pushed back or manhandled by pressure up the middle. They don’t have to pancake anybody, just don’t get bullied and overpowered. They must show improvement over their game film from 2020. Carman is a rookie who is literally getting his feet under him and the team won’t be giving up on a 6-5 interior lineman on which they spent second-round capital.

With the #Bengals preseason upon us, @JamesRapien of @AllBengals and @SINow joins me on this edition of the #JungleRoar pod to talk: When to Play Joe Burrow, Bengals O-Line Worry" at https://t.co/Vm7D9h8r4f

DEFENSIVE TACKLES (6):
D.J. Reader, Larry Ogunjobi, Mike Daniels, Josh Topou, Tyler Shelvin, Renell Wren
CUTS: Kahlil McKenzie, Freedom Akinmoladun
This figures to be pretty clear cut as the Bengals have a good rotation of five, which should be plenty in terms of quality and depth to make sure the run defense is vastly improved over 2020.

LINEBACKERS (5):
Germaine Pratt, Logan Wilson, Akeem Davis-Gaither, Markus Bailey, Jordan Evans
CUTS: Keandre Jones, Joe Bachie, Darius Hodge
Bailey and Evans are special teams candidates. Davis-Gaither provides speed and was a force on special teams in 2020. Will the group of Pratt, Wilson and Davis-Gaither prove they can cover and tackle? If they do, Bengals will be much improved on third down.

SAFETIES (4):
Jesse Bates III, Vonn Bell, Ricardo Allen, Brandon Wilson
CUTS: Trayvon Henderson, Kavon Frazier
Deep, experienced and fast. Good combo to have in the middle of the secondary. Improve tackling consistency, and you’ve got the makings of something big.

PLACE KICKER: Evan McPherson
CUT: Austin Siebert
Early on in camp, we have seen no indication that there will be any repeat of the Jake Elliott fiasco of 2017. McPherson has looked confident and strong and shows well on kickoffs. Siebert has looked solid as well and will likely wind up on an NFL roster within the first month of the season.