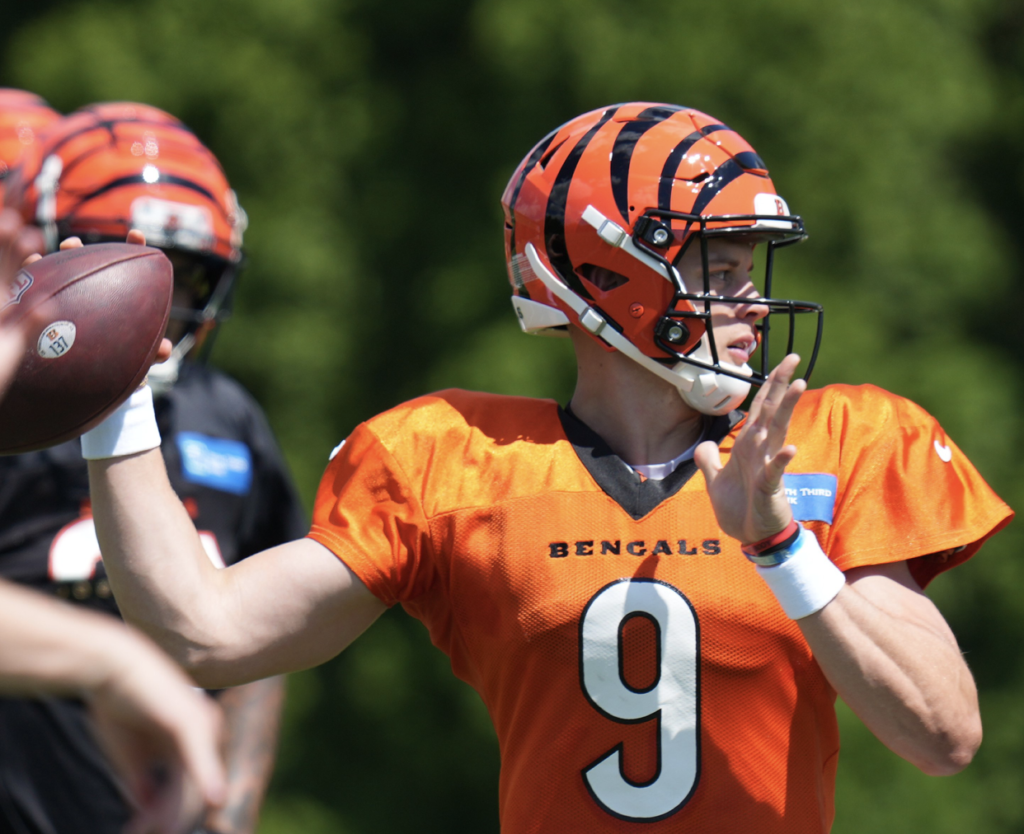 CINCINNATI – This continues to be a brave new world for the Bengals.

They have become one of the franchises that astutely monitors the waiver wire and makes calls to see if they can round out the roster to give themselves the best competitive chance to not just win but play deep into January.

Every NFL team has the opportunity to monitor the waiver wire and make deals. But the Bengals have used it the last two seasons to build not just talent but depth. Everyone knows the NFL is a war of attrition. You’re going to have players go down and the cliche “next man up” applies. But it’s the quality of those “next men” that often decides your fate over the course of 17 games and the playoffs.

It worked in 2021 with the acquisition of defensive tackle B.J. Hill for Billy Price, a center they were going to eventually cut.

They added key pieces through free agency in Vonn Bell in 2020 and Mike Hilton and Trey Hendrickson in 2021.

This is not a front office that relies on its draft picks and star players to succeed. This is a front office that has proven it can juggle its roster to bring in the best players and key complementary pieces to add to a roster that made the Super Bowl last February.

"Everyone made the team for a reason" Joe Burrow pic.twitter.com/zKedjNg2AH

If you weren’t paying close attention Wednesday, the day after roster cutdown, the Bengals claimed three veterans that they immediately plugged into their depth chart. Even Zac Taylor was surprised at Duke Tobin’s ability to claim three quality vets at 31 on the waiver order.

“We liked these three players, so when you like players you don’t think at 31 that you are going to get them, and it just so happended that we did,” Taylor said. “We’re happy, because we see fits for these guys and maybe other teams didn’t the way they’re structured the way their depth was. For us these three hit positions where we felt like we could help ourselves. We only carried four D tackles, that’s pretty rare for us, so now we’ve found that fifth D tackle. We’re always looking to help our offensive line out, turning over every rock to make that happen. Max Scharping becomes available, he’s a guy we liked so we add him to the mix. Devin obviously we have the issues on the injury front at tight end – we think some guys are going to get healthy and they’ll be able to help us – but he was able to add to the mix and we think he’s a good football player and will help us.”

“We think each one of those guys can help us. Obviously, we are a little banged up at the tight end position, so adding Devin is going to help us there. We like the tape we saw there, so we’ll add him to the mix. Max Scharping has played a lot in this league. Really smart guy, excited to add him to the mix as well. Then Jay, we had high regard for Jay coming out of college, coming out of USC. We took Cam Sample right after they took Jay. We are very happy with Cam now you Jay to the mix as well as a good, young developmental player that can be that fifth D-tackle right now. Three guys we think can come in and help us and develop and be what we are about. I’m excited to see those guys come in and work.”

Zac Taylor on a busy morning picking up three players “we like these 3 players. At 31 you don’t think that’ll happen.” #Bengals pic.twitter.com/cth5tCmD9U

To be lucky you have to play the game, and play it astutely. The Bengals probably weren’t counting on getting all three players they put claims on but they did. This is what championship organizations do.

All NFL teams have staff that are expert in waiver wire claims but the Bengals have shown a creativity that is next-level. It’s why it’s so fascinating to watch this edition of the Bengals maneuver their roster to try and make a run for another Super Bowl. It started with the approach in free agency and continued this week.

If anything should tell you this is a new Bengals attitude and approach, Wednesday’s actions offered a nice window into their philosophy.

Let us recap what the Bengals did and how they manipulated the waiver wire and their existing 53-man roster to add what could be valuable pieces in terms of depth and experience.

For all the hand wringing over what to do about the left guard spot, the Bengals found their way through an uncertain maze in training camp and preseason and settled on Cordell Volson, a young rookie out of North Dakota State that is a “glass-eater” in the words of offensive line coach Frank Pollack. Offensive coordinator Brian Callahan cautioned everyone after practice Wednesday to not be fooled by the pleasant “aw shucks” disposition publicly. He’s got a nasty in him that comes out on the field. But the real story here isn’t the starter, it’s the depth behind him that worried many Bengals fans. What happens if he goes down. Then what? Jackson Carman still hasn’t done enough to earn the trust of everyone in the building. Can he play? Yes. But the Bengals wanted an accomplished veteran and they found it in the person of Max Scharping, waived by Houston on Tuesday. Scharping (6-6, 325) is a fourth-year player out of Northern Illinois University and was a second-round pick of Houston in 2019. He has played in 48 games with 33 starts for the Texans over the past three seasons. The Bengals weren’t willing to just cut Jackson Carman and his $3 million cap charge after one season on the books as a second-rounder from 2021. They weren’t going all Alex Leatherwood here, the first round tackle from the same draft cut by the Raiders on Tuesday.

Again, this is fascinating if only because of the noise earlier in the day on another tight end. Everyone thought when they read the national reports that OJ Howard was being brought in for a workout and to be signed, the Bengals had their backup plan in place. That is, until another better option came along, again through waivers. Asiasi didn’t set the world on fire with the Patriots but he demonstrated he could get on the field and be productive in a Josh McDaniels offense. At 6-3, 260 pounds, Asiasi is a third-year player out of UCLA, originally was a third-round pick of New England in 2020. He played in 10 games for the Patriots over the past two seasons, catching two passes for 39 yards and one TD. Those numbers are obviously not eye-popping. But you don’t put in a claim on a player unless you know for a fact that player is likely to assimilate your system and be productive. This is not Rob Gronkowski or Travis Kelce. This is a tight end who offers size and can catch and block. It’s also insurance behind Hayden Hurst, Drew Sample and Mitchell Wilcox, the latter two who might need time at the beginning of the season to get back to full strength.

If you’re defensive coordinator Lou Anarumo, you can never have enough proven run stoppers in the middle of your line. As another projected three-technique in the middle, Tufele is just that. At 6-3, 305 pounds, Tufele is a second-year player out of Southern Cal, originally was a fourth-round pick of Jacksonville in 2021. He played in four games for the Jaguars last season and had two tackles. This is not a projected starter but rather quality insurance behind B.J. Hill and DJ Reader. The Bengals don’t want to put too much on their rookies, who certainly can contribute. But to have a fourth-round talent on your roster with Zach Carter, Josh Tupou and Jeff Gunter, Anarumo is licking his chops in terms of combinations he can toss out on the field. Tufele might be the waiver wire claim who could make the biggest impact soonest.

This is why it’s often premature to lose one’s mind over cut day. With Chrisman, it was assumed that he did enough to win the job from the veteran Kevin Huber. Huber was the steady force. Chrisman had the bigger leg. What if you could keep both? Well, for a second straight year, that’s precisely what happened as no one claimed Chrisman and the Bengals have an known commodity if Huber’s net average drops like a lead balloon or if he’s injured. Browning looked very impressive in the preseason and like with the punting situation, the Bengals were confident they could have their cake and eat it too. Lassiter is a great stash on the practice squad and again someone who’s been in the system for the spring and training camp. That’s the value of keeping your developmental players close to you. And to think they were thisclose to getting Kendric Pryor back as well before the Jaguars made a claim on the speedy receiver out of Wisconsin.

The reason the Bengals had to cut their veteran backup quarterback and safety on Wednesday was they had to make room for the three waived players they added, who by league rules, had to be added to the 53-man active roster. Allen and Thomas, the safety, were cut and became immediate free agents. The third spot opened when Trayveon Williams was waived off the active roster. Williams can return to the practice squad if he clears and Allen and Thomas can simply wait on a call from the Bengals and re-sign when the team calls, if they want to return. Or they can go somewhere else. Odds are, they want to return.